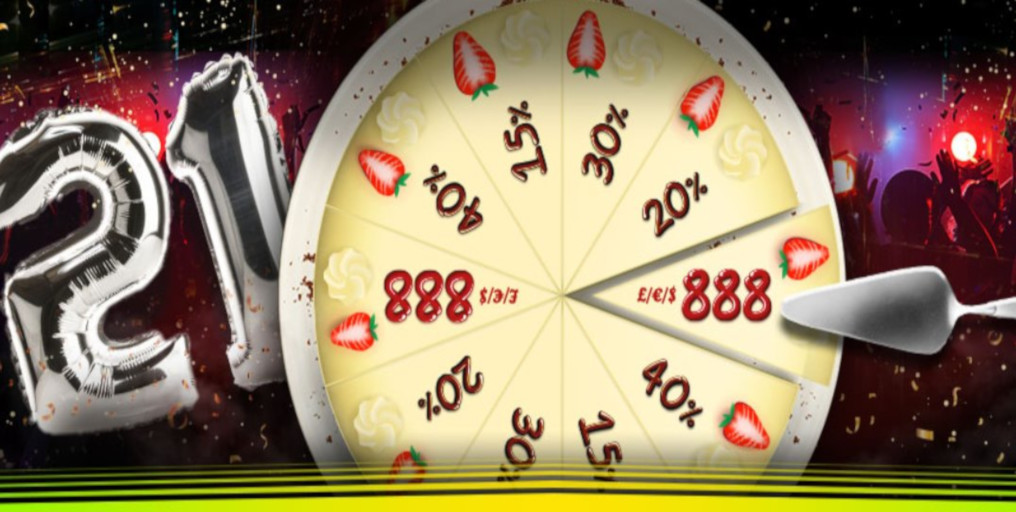 Have a Slice of 888casino’s 21st Birthday Cake

One of the most respected and reputable online gambling venues in the world – 888casino – is celebrating its 21st birthday and a specifically invited players will be able to join the party for some mouth-watering prizes.

Want to get your name on the guest list?

Grabbing a slice of the action in this birthday promo deal at 888casino is a piece of cake, metaphorically speaking.

Players which make a €20 or more in deposit until 3rd September 2018, using the promo code 888CAKE, will be granted a spin of the cake wheel. The wheel must be set in motion within 48 hours and the promotion cannot be transferred. Great thing about this deal is that the code can be used a maximum of 56 times per household – twice a day during the promotional period.

Upon depositing and spinning, the players will hope to receive anything from 15% – 40% up to €200 FreePlay. That’s not all as the biggest slice of the cake is worth cool €888 in FreePlay.

All wins off of the birthday cake wheel are paid as FreePlay and will be converted into a bonus that needs to be wagered 30 times within 90 days from granting before a withdrawal can be made.

With the exception of jackpot wins, wins generated through bonus – FreePlay – will be capped at €500.

888casino has made sure to sugarcoat this promo by putting a string of high-paced casino games into the offering – starting from the progressive jackpot slot titles of Irish Riches, Rise of the Pharaohs, Millionaire Genie, Ray of Light, Pirates Million, Treasure Fair and A Nightmare on Elm Street.

You can also try your luck at Mystic mask, Gods of Gold or table games such as Multihand Blackjack and European Roulette.

All you have to do is visit the 888casino website.