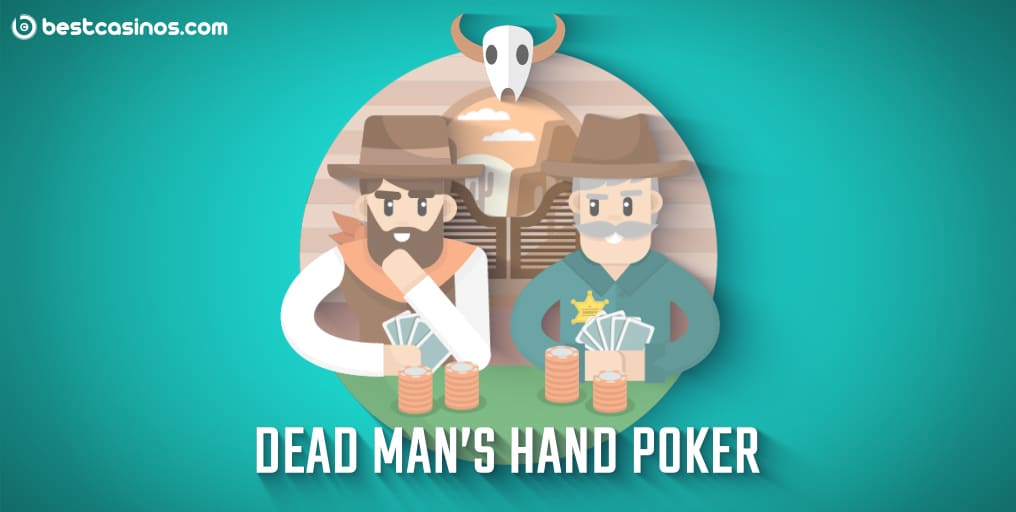 If you are an avid connoisseur of Poker, chances are you have already stumbled upon the Dead Man’s Hand Poker. The controversial Poker hand has been at the centre of much debate, both on accounts of its origin and card combination.

If you are curious about Dead Man’s Hand in Poker as we were, keep reading what we prepared. We dived into the mystery to unveil the real story of how this hand came to be.

Moreover, we discussed the benefits of forming such a hand in modern Poker games.

What is Dead Man’s Hand Poker?

The practice of naming card combinations is not new. However, one cannot deny that Dead Man’s Hand has one of the most striking names around the casinos.

Dead Man’s Hand is, just as its name suggests, a hand in Poker. It is not an official name, as you might’ve noticed, but rather a slang term for one of the most notorious hands ever. Its American background has made it a phenomenon across the US casinos.

So, what is in the Dead Man’s Hand?

Well, the current version states a pair of Aces and Eights (both black) make the Dead Man’s Hand. The fifth card varies from version to version.

There’s a great story attached to this term, and we will discuss more it in one of the sections below. 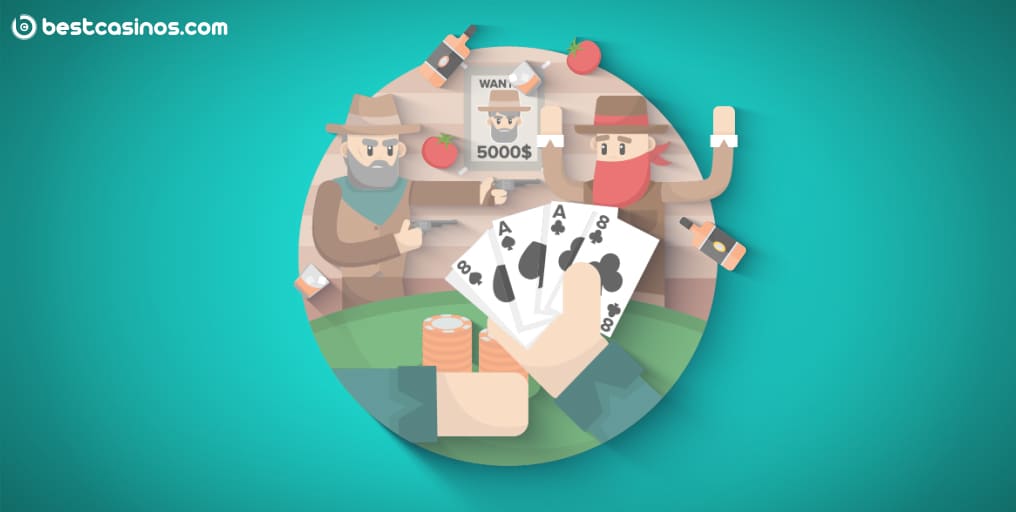 What Does Dead Man’s Hand Mean in Poker?

In Poker Dead Man’s Hand is a regular hand which you might obtain during the rounds. It’s not exactly a frequent occurrence, though. A pair of black Aces and a pair of black Eights is somewhat difficult to come by, but it’s not impossible.

The significance of the hand lies in its notoriety, rather than its value. As a regular Poker hand, it’s quite valuable for the players.

However, you will hardly find a player who enjoys receiving it! The reason for this is that it is quite ominous because it has close links with death. Just one look at the name of the hand is enough to realise it is not something you want to see!

Nevertheless, the card combination is a famous five-card draw hand which was a popular variant in the Old West. Today, the five-card draw variant is the foundation of Video Poker, the RNG version of the casino card game.

The Story Behind Dead Man’s Hand

If you are a fan of the macabre and bizarre, the story behind Dead Man’s Hand Poker will surely interest you.

The story begins in the late 19th century America. Think prairies, gunslingers, and the Gold Rush.

One August morning in 1876, Wild Bill, a then-famous American gunslinger, was casually playing cards with friends in a Nuttal & Mann’s Saloon in Dakota Territory. It was still early in the day when Jack McCall, one unlucky gambler, walked into the saloon and shot Wild Bill in the back of his head.

Wild Bill died on the spot, and according to the legend, he was holding two pairs of Aces and Eights in his hands at that moment. And the cards were the last thing he saw before his untimely death.

More on the Story

The story would not be anything special, were it not for a couple of odd details. For instance, Wild Bill Hickok, as Jack-of-all-trades, was a skilled Poker player in the day. He was a fascinating figure, notorious for his gunslinging adventures and services in Dakota Territory.

Hickok was also paranoid and feared murder from numerous enemies and vigilantes. In saloons, he always insisted on sitting with his back to the wall, but that day, he was unable to do so. A fellow card player refused to trade seats with him, leaving Hickok to sit with his back to the door.

But why did McCall murder Hickok?

Well, he claimed he was seeking revenge for another murder. But the real story is that Hickok beat McCall in Poker the day before. McCall had lost everything, and Hickok offered him money and food. That still would not be a grave offence, had he not advised him to return once he gathered enough money. Jack McCall was, suffice to say, livid.

Not to be the ones to romanticise such a moment, but games of luck feature a lot of superstition. And the fact that he died while having two pairs of black Aces and eights were reason enough for a legend to take root. Oh, and did we mention that the city in which he lived was Deadwood?

The story of the hand became immortalised in 1926 with the book Wild Bill Hickok: The Prince of Pistoleers.

Changes in the Hand

Today, according to the official version, Hickok held a pair of Aces and eights, both pairs black. But it wasn’t always the case.

The story changed significantly over time, and it was not rare to find clashing info the card combination.

The first link with Hickok came only in the 1900s, with several version of the story before the one. The earliest record was from 1886 when it was explained as a full house hand with three Jacks and a pair of 10s.

In 1903, another version emerged. The Encyclopaedia of Superstitions, Folklore, and the Occult Sciences explains the term as a combination of Jacks and sevens. Jacks were quite popular back then, as the 1907 edition of Edmond Hoyle’s Games claimed Jacks and eights made up the hand.

However, from the 1920s and onward, the Hickok version with Aces and eights became the standard. Today, the hand is a significant trend in pop culture, with numerous tributes, inspirations, and mentions in films and music.

With such notoriety comes a lot of attention. And if there is something that appeals to casino players, it’s superstition.

Now, we already mentioned that a lot of stigmas follows the hand. It’s generally considered unlucky to have this combo in your hands, and players around the world know it.

But its popularity goes beyond land-based and online casinos.

Nowadays, you can find mentions of Dead Man’s Hand Poker in almost any form of art. From music to TV shows, it has managed to seep into every nook of entertainment and establish itself as a recognised symbol of bad luck.

After all, what better way to convey the sense of impending doom than to have the character receive such an ominous hand?

Literature abounds with Poker Dead Man’s hand references. For instance, the book Along Came a Spider by James Patterson uses the term on two different occasions. The first is in a story about the protagonist’s father and a winning Aces & Eights combo that helped him procure a firearm. The other refers to her computer password that is, unsurprisingly, Dead Man’s Hand.

The classic One Flew Over the Cuckoo’s Nest uses the card combination as inspiration for a tattoo. There is a lengthy discussion about the meaning of the tattoo, which spurred many readers (and later viewers) to get one themselves as well.

John Ford, a popular film director, specialising in westerns, used it as well. His movies often featured a foreboding scene where this hand foreshadowed death.

The Dead Man’s Got Game

References of the Dead Man are far-reaching, and they are present even in video games. Some of the most popular video games where you can find an Easter Egg or a hidden homage to the portentous symbol are Hearthstone, Wing Commander IV, and even Need for Speed: Carbon.

Where to Try Your Hand with Dead Man

Seriously though, this is a great combo that can be of great help during your playtime. More often than not, it comes out a winner, giving you a grand prize along the way. So, fear not!

Another excellent place to try your hand at Video Poker is Ignition casino. This is a superb online and live Poker casino which features some of the best games in the industry. If you want the best possible experience, look no further than Ignition Casino.

The third casino which we think will be a perfect place for honing your skills is Planet 7 casino. This digital casino brand is a popular hub for novices and players that wish to upgrade their casino skills. The best thing about this casino is that you can practice video poker for as long as you want before you start playing for real. And don’t forget to try live Poker – it’s an exclusive real-time experience! 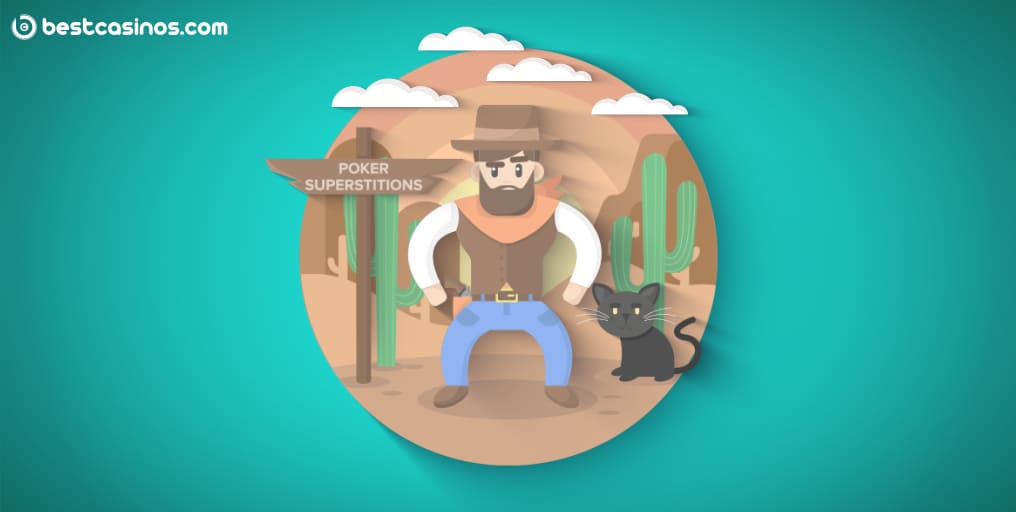 If you thought this hand triggers superstition, wait until you hear about other instances in the game.

Poker is one of the most popular games in the casino universe, so it’s not a surprise to find many weird stories and odd customs in the casinos. Players with an affinity for the game are a superstitious bunch, so there is a lot to keep in mind when joining such a table. For instance, getting Aces in the first round is for many players a happy occurrence. But some players consider it bad luck!

Yes, you read it right – some players are willing to forfeit their cards right off the bat.

The reason for such radicalism? It’s unlucky. Go figure!

Another prime example is changing seats. Sometimes, players experience a terrible streak. They keep losing hands at the table, and they end up blaming the seat. And guess what comes as the perfect solution? Yes, changing seats!

Wow, just imagine what would happen with Wild Bill had he changed seats with the other player. McCall would not have killed him then, and we would not have such a superstitious card combo to talk about today!

Players also tend to stick to things which they had on themselves during a lucky streak. Lucky charms, card protectors, you name it. And sometimes it even includes clothes.

Some players adamantly wear the same clothes whenever they take a seat at the table. They believe this brings them good luck and helps with achieving satisfactory results.

Conclusion – The Power of Superstitions

As you have seen above, casino players are no strangers to quirky rituals and odd beliefs. Certain fallacies go as far as to contrive logic and common sense, but who cares if it helps?

Sometimes, the need to rely on a potent superstitious belief is so strong that players invent personal convictions. And it speaks volumes about the importance of faith in playing this game.

Case in point is Dead Man’s Hand Poker. Were it not for the untimely death of Wild Bill Hickok; the world would have never heard about this hand. Players would continue playing and anticipating it as a good combo, which it is in reality. But after that fateful day, the superstition took over. And to this day, it has remained now one of the most feared card combinations in the casino industry.