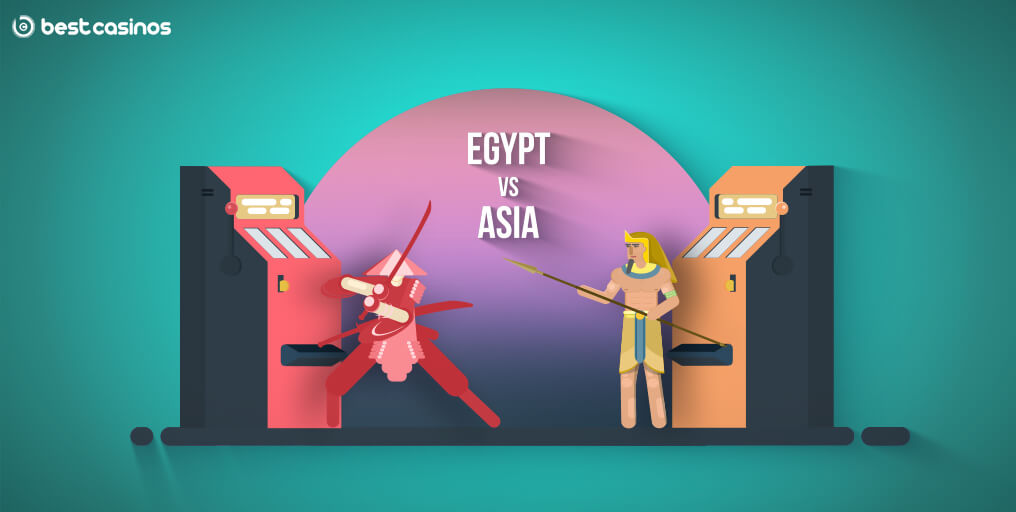 Slot games come in various themes and subjects that encompass a great number of different topics.

The broad selection goes from all-time classics such as Vegas slot games with fruit symbols at the centre of attention to modern-day science fiction type of machines that – in no rare instances – are an acquired taste.

Themes in slot games are almost impossible to count down simply due to the fact that some come and go without ever leaving a significant trace. When you think of it, it all comes down to tastes and personal preference. One would think that finding a theme pattern would be difficult but the truth is there are some subjects that are more attractive than others, some that would go on to survive the tooth of time.

If there’s one thing we learned from our slot gaming experience, it is that games relating to history and mythology are hard to beat.

People would subconsciously relate to the slots they choose to play and are inclined towards certain types of games out of their unfulfilled desires and dreams, but the appeal of times of old, times of mystery and time of divine creatures will, however, beat any opposition.

And if there are two types of slot game themes that encompass all of these individual elements – then that’s most definitely Egypt and Asia themed slot games.

Egypt has been a centuries-long fascination for many aspects of the popular culture – gaming business included – whereas the Oriental appeal offered a different, yet equally strong, captivation.

Egypt and Asia have been themes of choice for many classic one-armed bandits and early-days slot machines. With the unstoppable progress of technology and innovation in the entire slot development process, creativity kicked in as world’s leading casino software developers introduce various forms and endless possibility for the two most exploited slot subjects.

There is no count to the number of ancient Egypt themed online slots available out there. The sheer range of these games is astonishing and highlighting any one before the other would be a crime in its own worth. That is exactly why in this section you will not be met with three best Egyptian slots but those that have been proven to generate quite a big playing audience over the past couple of months. 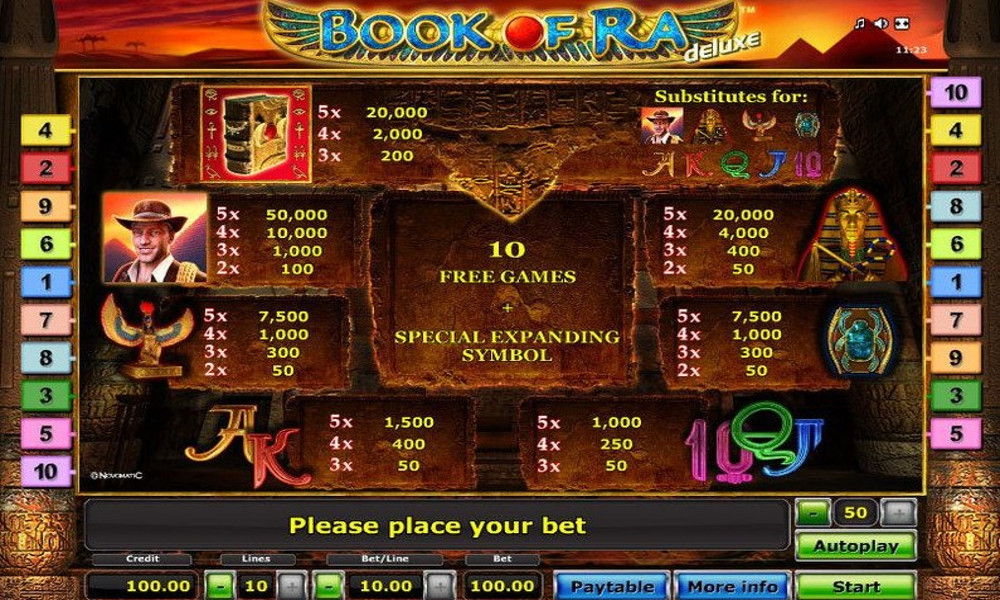 This 5-reel and 10-payline slot game is an upgrade to the Book of Ra title and an ever so more popular title than its predecessor. With an RTP of 95.10%, this medium volatility Egyptian theme is quite an affordable game that proved to be a great appeal for big masses.

Novomatic did a great job with the Book of Ra Deluxe slot adventure theme that is taking you on a trip to discover treasures and riches beyond your wildest imagination. With a jackpot of 5,000 coins, a special expanding Book of Ra symbol and the Free Spins bonus equipped with a 2x multiplier, this game offers some high-paced action you will love.

Those seeking the Indiana Jones style of action should also have a look at Play’n GO’s Book of Dead. 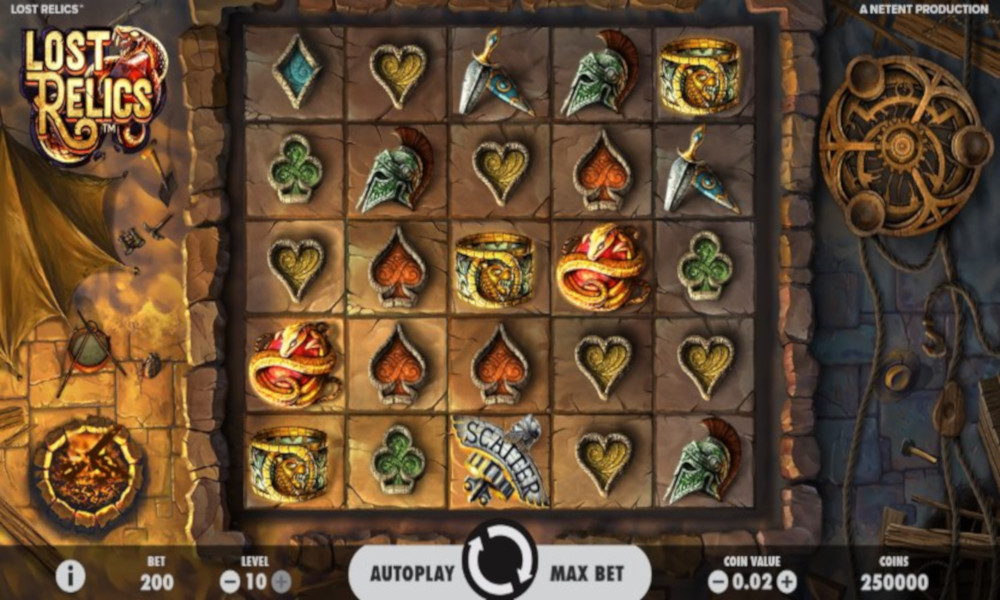 Lost Relics is one of the latest NetEnt products which wasted no time in establishing itself as a top Egyptian theme slot. You are invited to join an exploration mission to unearth mysterious riches and – well – the lost relics of magical powers.

This slot machine is running on 5 reels and NetEnt’s trademark Cluster Pays which proved to be quite popular with players around the globe. It is packed with tantalizing features such as Coin Win Feature, Extra Wild Feature or Extra Scatter Feature, all of which appear in the base game.

As for the extra fun, NetEnt made sure to incorporate the Free Spins feature and a Hidden Chest Feature just for good measure.

If you’re asking yourself what did the Queen of Riches do to deserve a place in this list, we thought that 117,649 ways to win would be a good place to start.

Big Time Gaming made sure to implement their Megaways mechanic that adds a special spice to this ancient Egypt adventure and you will have plenty of fun playing at six reels of this high-volatility slot game.

Truth be told, it might not be one of the most action-packed Egyptian themed slot games out there but it’s definitely a one that deserves your attention thanks to the Full Reel Wilds and a Reel Clone Feature with up to five reels possibly getting cloned with same symbols.

Developers have been churning the Asian themed slot titles from the first moment machines hit the floor at land-based gaming venues and it’s another subject that’s been defying age with the selfless help of ninjas, dragons, geishas, lucky eights and cherry blossoms.

There is sound reason behind the overwhelming popularity of Oriental themed online slots as they harness the sheer volume of the entire Asian continent – spreading to all of the countries in the Far East. And no wonder developers are relentlessly tapping into this colossal market by publishing diverse titles that become a huge appeal to players from China, Korea, Japan and all other wonderful countries from the continent. 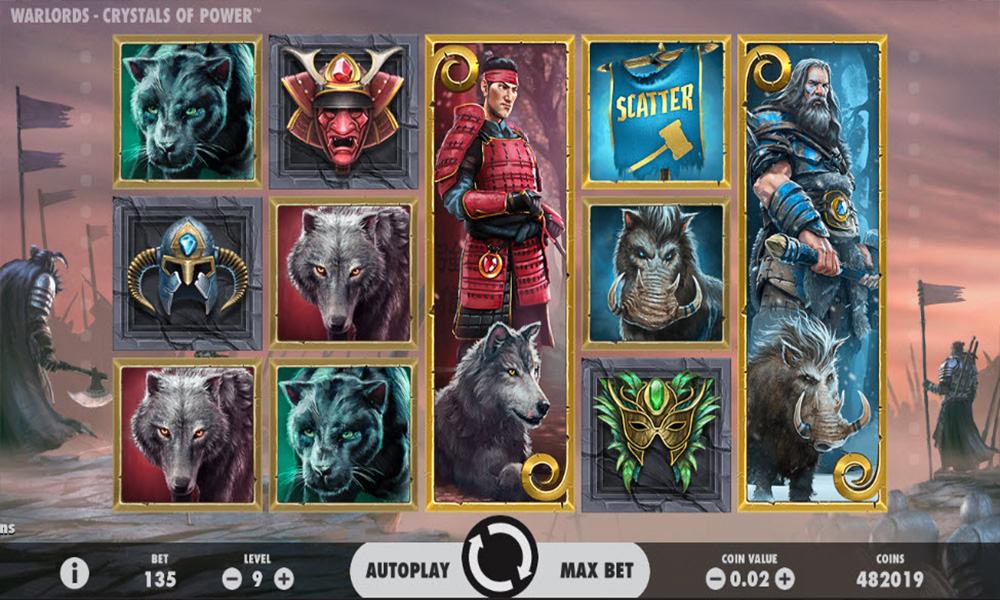 Being one of the world’s premium slot game providers, NetEnt has built its reputation upon high-quality, intense-action and huge-reward games that have been dazzling the gaming community from the first moment they got published.

As a title dealing with a medieval group of Oriental leaders, the Warlord Crystals of Power slot will take you on a world-conquering mission where jackpot worth 6,666 coins is waiting for you. This 5-reel and 30-payline game has gone to become a top Asian themed slot game thanks to its incredible gameplay and features that include three different types of Free Spins and an Overlay Wild feature which adds quite a twist to this game. 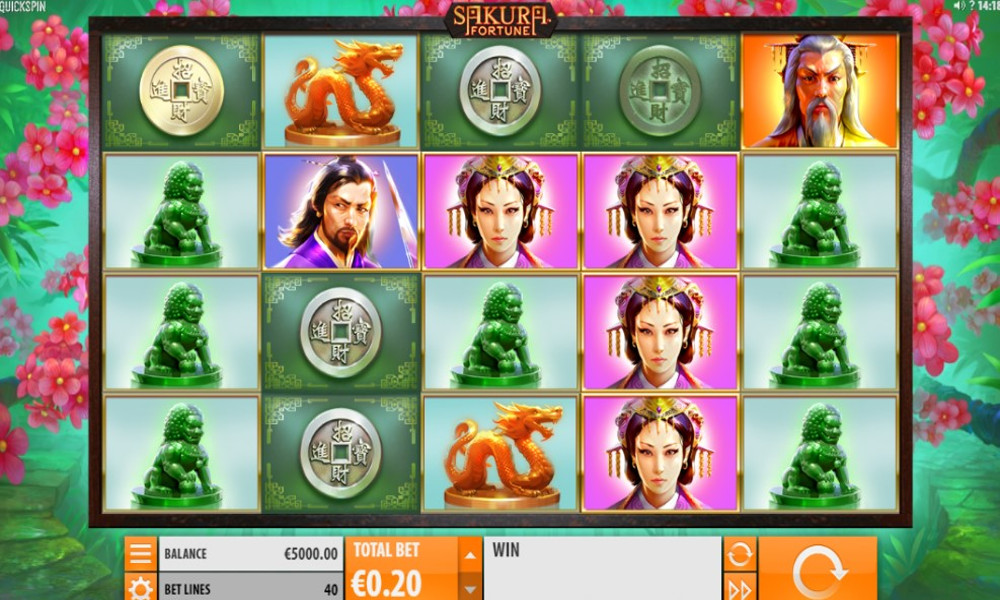 Experienced casino players will know what to expect with Quickspin slot games which usually feature impressive graphics and equally stunning gameplay. Throw in a pinch of Asian mystique in it and you get a top Asian slot game such as Sakura Fortune.

This 5 reel and 40 payline title boasts an RTP in excess of 96.58% which makes it a high-volatility game. With a 1,000-coin jackpot and an Asian abundance of features, this gem promises great payouts and fun all around. Sakura Fortune Respins and universally loved Free Spins are enough of an appeal to have a try and once you’re here, you will never leave. 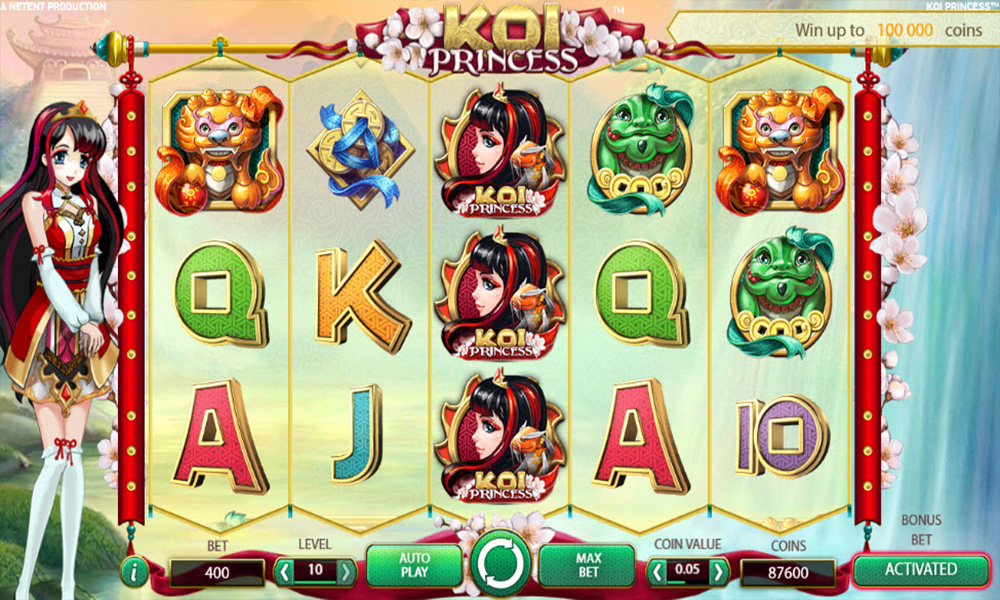 Koi Princess slot game is another proud product of NetEnt. As far as Asian themed casino slots go, this particular one can – hands down – be considered one of the best around. Brilliantly designed to resemble the Japanese Manga-style art, Koi Princess features stunning graphics and an even better gameplay.

This particular NetEnt creation comes with an opulent choice of features, starting with a Bonus Bet which increases your chances of hitting the jackpot – and triggering some special random features. Players can expect no less than three random special features – 5 Hit Random Feature, Random Wilds Feature, Wild Reels Feature – and it’s only the beginning. Once you dive in this game properly, there is also a Bonus Feature to activate, where you get Sure Win Free Spins, Wild Reels Free Spins, a Coin Prize and a Bonus Wheel. What more could one ask for? 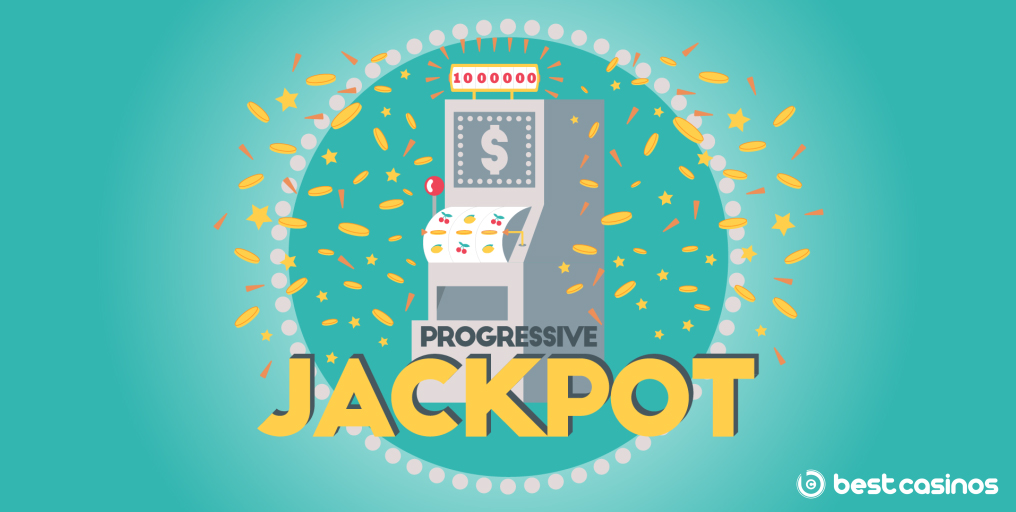 Have you ever asked a friend – or yourselves for that matter – what is it about casinos that makes them so appealing to wide masses on every corner of the globe? Some would say it’s all about the element of fun and excitement, others would bring an adrenaline kick as an important factor. Still. There are few people that would say a dream of hitting that elusive million-dollar jackpot is what is burning inside every single one of us casino enthusiasts.

With the introduction of online casinos and their unstoppable expansion over the past few years, the players have been given a significantly better opportunity of realising that dream of theirs. All thanks to progressive jackpot slot games.

This type of games might dispense more significant sums of money and will require a more hefty bet than usual but the appeal of possibly hitting a life-changing jackpot often tends to be too good to turn down.

Noted providers such as IGT, EGT or Betsoft appear to have a weak spot for progressive jackpot online slot games and all boast quite a list of both Egyptian and Asian themed progressives.

All of these can be found at BestCasinos and accessed for either freeplay of real money. This way our valued fellow players can first try them out get into the bits and details surrounding them before they invest their money and have a pop at that mouth-watering windfall.

There’s hardly been a constant in the online gaming industry as strong as the two popular themes we discussed here in this piece. Egypt and Asia are fascinating subjects that have been addressed by a whole host of different slot developers.

The sheer volume of Egypt and Asia oriented slot titles is frightening. One would think that the popularity of these two times would diminish over time but it’s quite the opposite. Technical advances and innovative approach towards slot game creation have allowed slot specialists to adopt a different approach and constantly rediscover these two subjects.

It’s fair to say Egypt and Asia are the two gifts that keep on giving.