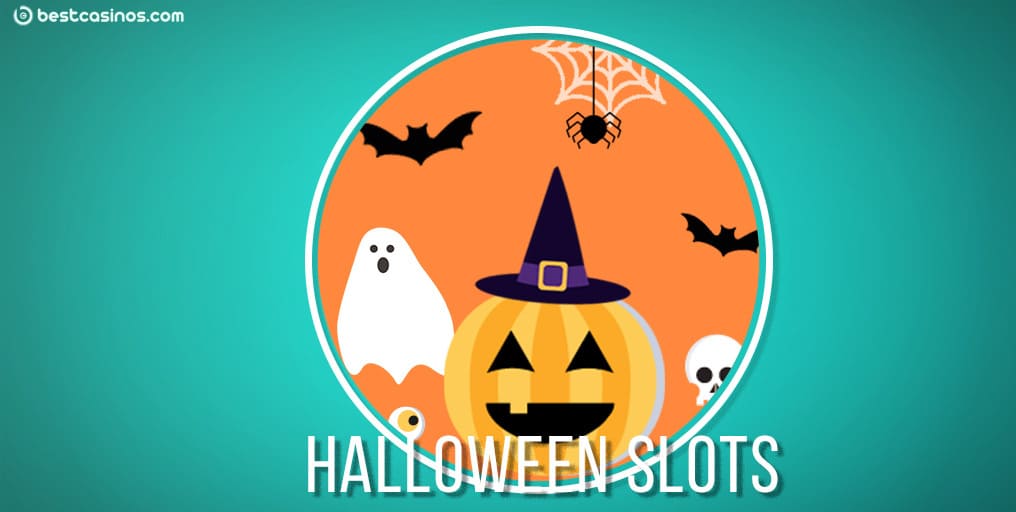 As soon as the clock strikes midnight on the first day of October, it’s as if something miraculously changes within us and we enter the ‘spook mode’. Spook mode is, for those unfamiliar with the concept, a special mindset that we adopt only during the Halloween season. And in that mode, it’s as if the only thing we want to do is play Halloween slots for hours on end.

Luckily, there are so many titles that we’ll likely never run out of hair-raising gaming material. Game suppliers provided enough Halloween thrill – and we are about to show it to you.

The team over here at BestCasinos is quite excited about the upcoming holiday, so a decision to make a list of the best Halloween themed slots were made. We tried mixing it a little bit, so you will see that the list consists both of the latest slot releases and some unforgettable classics. 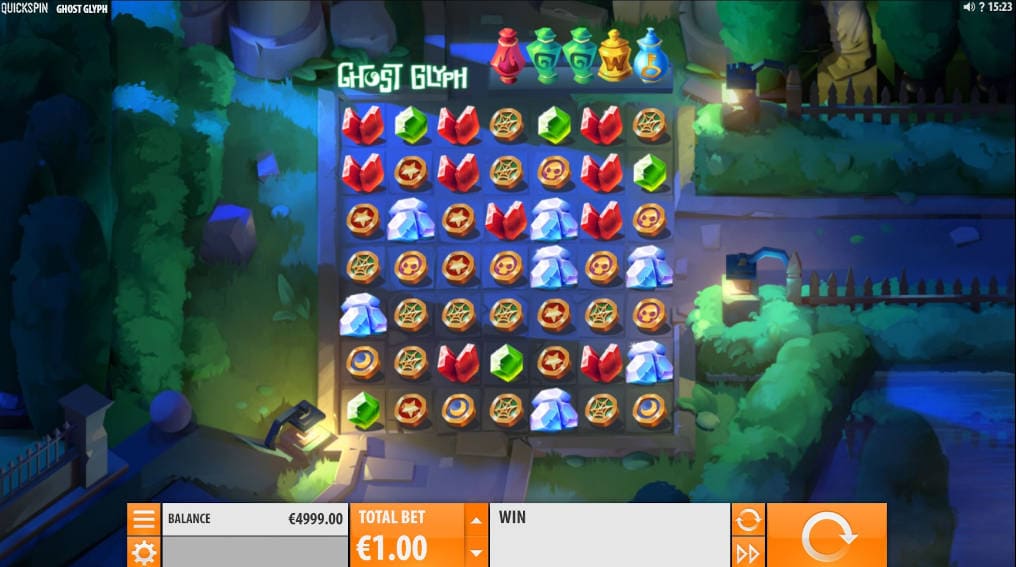 Quickspin is a big fan of Halloween, and so each Halloween, we get a surprise slot release from the company. This year it was Ghost Glyph, a charming cluster pay slot with 2,260x the stake max payouts.

In the game, the players are faced with several ghosts in a spooky backyard. They are not scary, but rather quite friendly – and they will welcome you to the haunted house with open arms. Ghost Glyph video slot has three main features, and those are the eponymous one, Free Spins, and the Urns. When you get inside Free Spins, the screen will move you into the house where you get to trigger the Ghost Urns. The slot came out in September, just before the Halloween slots season started. 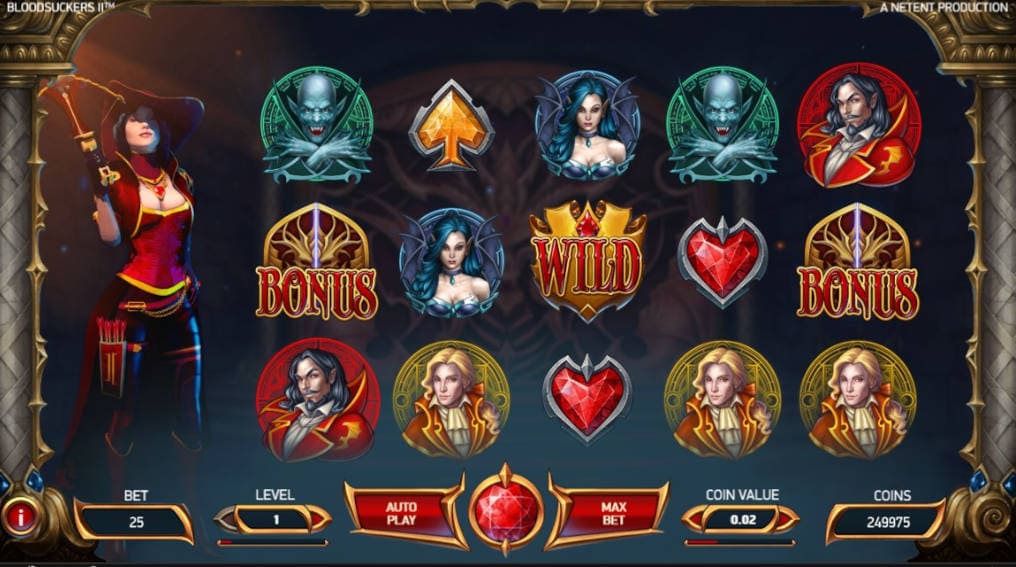 This one is an oldie and a goldie. NetEnt is famous for its spooky, scary, and thrilling slot releases. Blood Suckers 2 is precisely that – this sequel to the famous Blood Suckers slot deepened our love for vampires even more.

NetEnt launched the sequel back in 2017, which means we might get to see the third one quite soon (that’s just wishful thinking on our part). Among the main game, features are Free Spins, the Hidden Treasure Bonus Game and two random modifiers. All in all, it’s a perfect game to play in October – if you dare, that is. 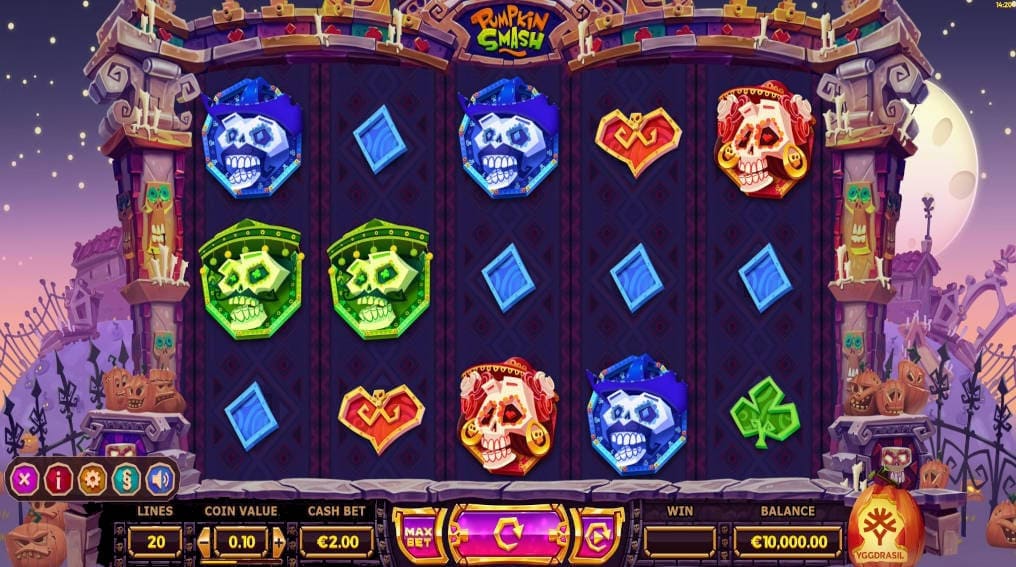 Trust Yggdrasil Gaming to approach a subject and switch it up a bit. Pumpkin Smash, a hit video slot release from Yggdrasil, is the company’s contribution to the Halloween themed slot collection. Of course, the company spruced it up with its charming innovations, making it a prime Yggdrasil game product.

The inspiration for the release was the Day of the Dead, which means it’s colourful, vibrant, and uniquely bizarre. There are two bonus modifiers, one of which is a trip to special Free Spins. Of course, it’s visually breath-taking and technically impeccable, so we are sure you’ll love this release as much as we do. 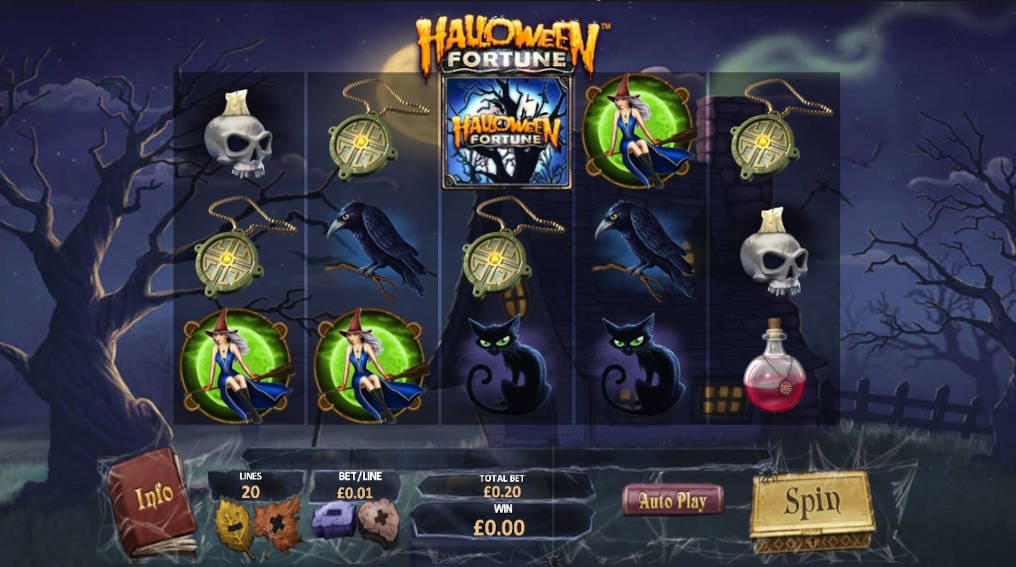 Playtech is a major casino brand which tried its hand in almost any slot theme you can think of. But it would be Halloween Fortune slot that we added to this list because it captures the holiday atmosphere beautifully. The main protagonists are three witches who fly around the reels on their brooms. The black cats, ravens, potions, and skulls complete the story of spooky witchcraft and mystery.

This 5-reel slot boasts 20 paylines which you can use to generate awesome wins. Besides Free Spins, you can enjoy great Multipliers, Bonuses, and similar prizes. Don’t miss this one if you can – you won’t regret playing it. 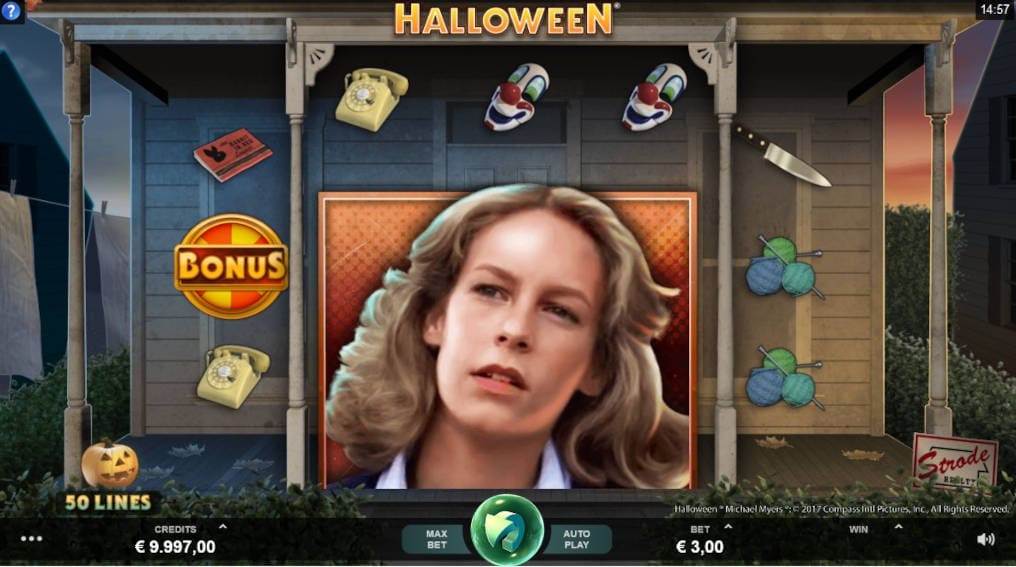 Halloween is probably the most famous Halloween-themed slot of all times. Microgaming launched the game ages ago, but it’s still fresh like it came out yesterday. It’s a branded slot, as Microgaming signed a deal to acquire the licence for using the film classic elements.

If you watched John Carpenter’s eponymous 1978 hit, then you know how scary the story is. Well, the slot is scary as well – and we won’t try to sugar-coat it. Trick or Treat, the Bogeyman Bonus, and Free Spins that are included in the game. If you are a fan of the movie, definitely give this slot a spin. 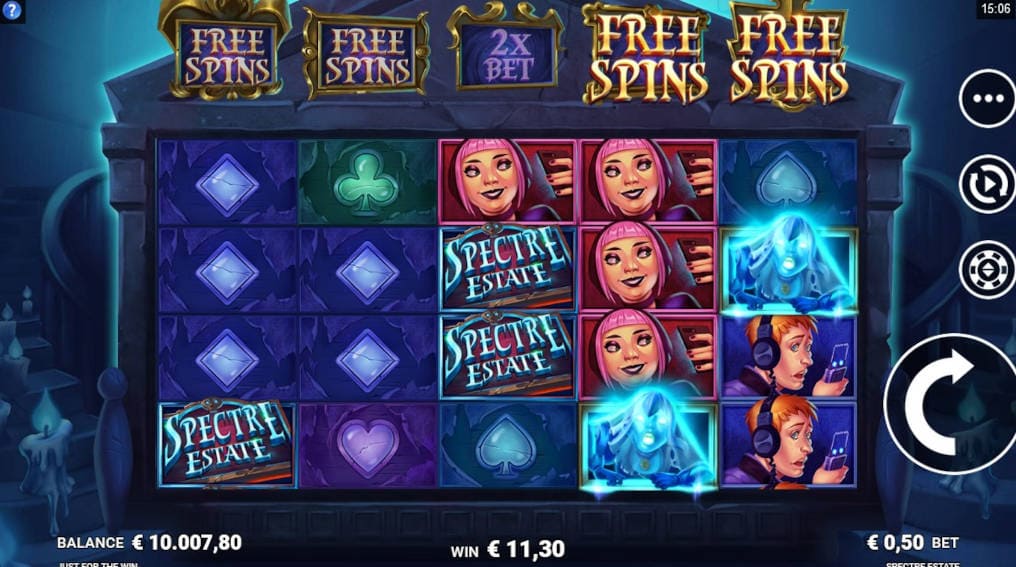 This game is also a Microgaming slot, but unlike Halloween, it’s one of the most recent releases. Spectre Estate is a scary-yet-entertaining slot release produced by JustForTheWin. The independent studio developed and launched it across the Microgaming casino network in September, which is a perfect timing based on its theme.

Spectre Estate is so fun that you will feel possessed as soon as you open it. We kept playing it for a very long time – longer than we are ready to admit – so you know it’s well. We appreciated the soundtrack because it’s quite uplifting yet eerie. True fans of such themes will appreciate it as well for sure. 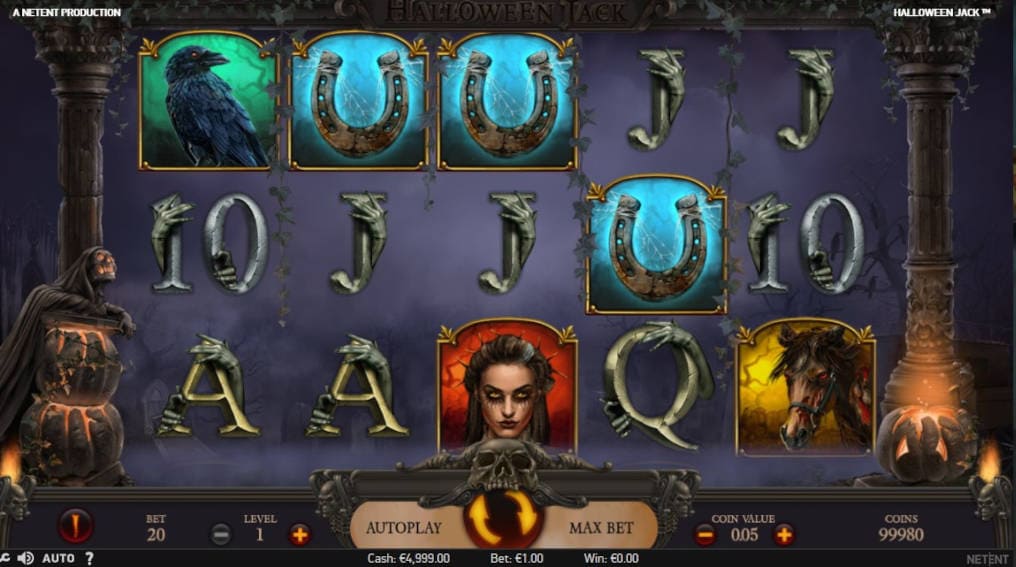 Halloween Jack is the story that shows you what happens when you stumble upon an ancient box and decide to open it. Moral of the story: just don’t do that. But the girl in NetEnt’s legendary video slot did, and you can see what happened next if you try it.

The game modifiers are Respins Jack-o’-lantern Walking Wild feature, Free Spins, the Stacked Hell Hound Wild and the Expanding Death Reaper Wild. But a friendly warning – the game is highly volatile, so pay attention to your balance if you don’t want it to slip away.

A Nightmare on Elm Street 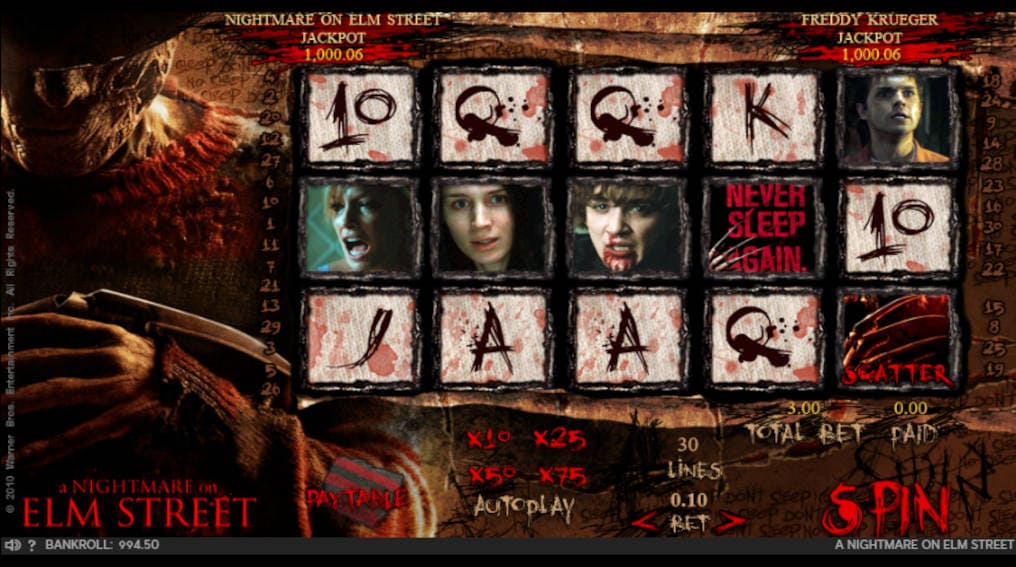 Another famous movie classic, A Nightmare on Elm Street, was the inspiration for the eponymous slot from 888. Few players are familiar with 888 casino’s proprietary software, but the brand has a company that develops exclusive games. The games cannot be found anywhere else, only on the 888 websites.

If you enjoyed watching that movie – if enjoying the movie is possible at all – you are going to love this slot. The studio has exclusive rights to use the movie in the game, so characters, paraphernalia, and the setting are prominently featured. Oh, and Freddy Krueger is there of course. He is always there. 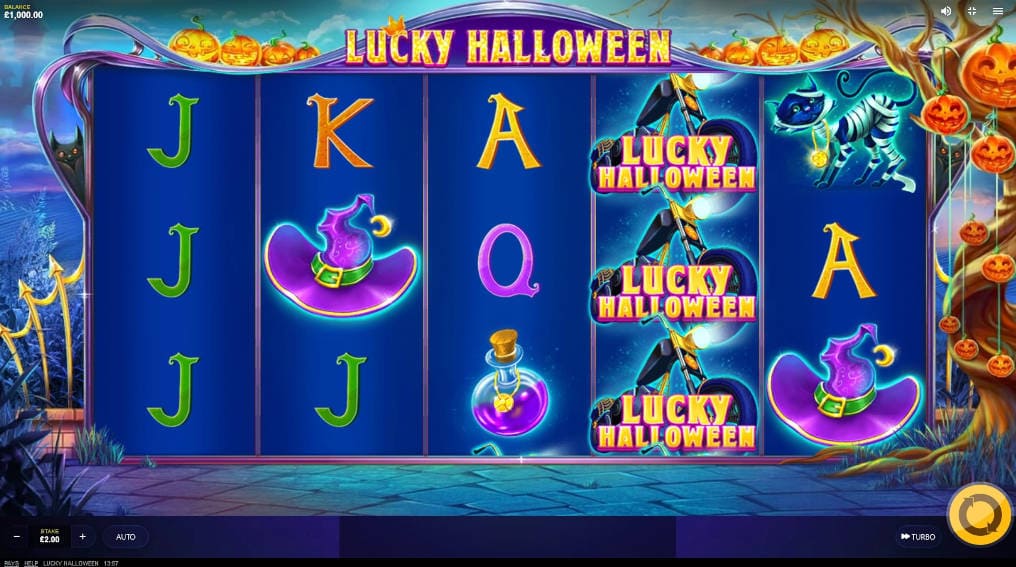 After this macabre release at 888 casinos, it would be a great idea to try something a bit less scary. Red Tiger has the perfect thing – it’s Lucky Halloween release. The main character is Pumpkin Biker, whom you follow on his path to riches.

The 5-reel slot has 20 paylines which give you a shot at taking home a prize worth 800x the stake. Even four years after its release, Lucky Halloween is still a popular pick for fans of the Red Tiger portfolio. It has high volatility, so don’t expect frequent wins. 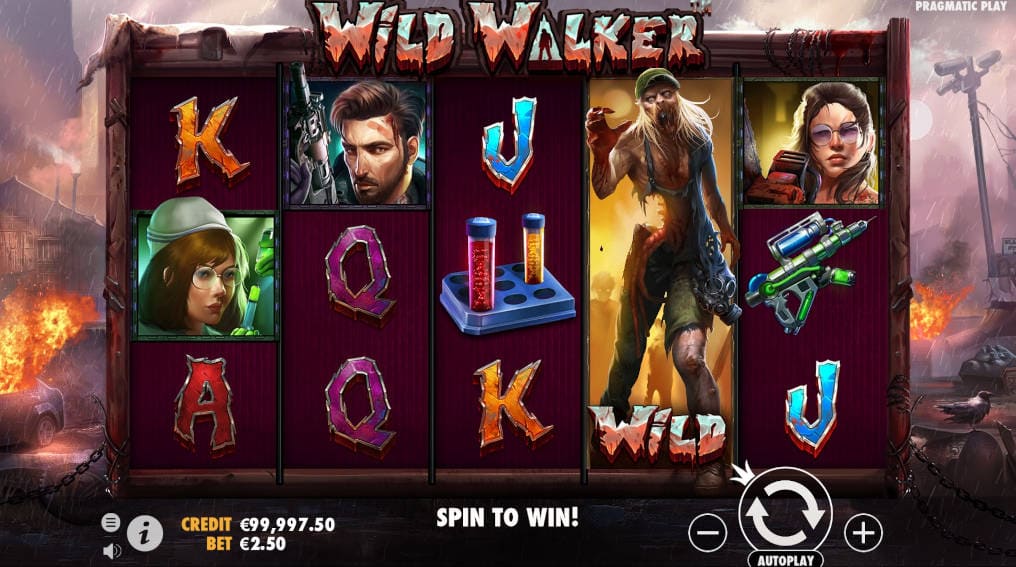 Wild Walker is one of the freshest releases on this list, although the characters in the slot aren’t. Pragmatic Play’s newest apocalyptic slot unleashes zombies who are threatening to slaughter us all. But despair not, brave soldiers – there is a way to defeat them and stop the invasion. And possibly save humanity along the way.

Fight with zombies and defeat them, and you will gather riches beyond your imagination. We are not sure why would you need such riches as it’s a post-apocalyptic setting, but maybe you can use it to rebuild the civilization. Or not, you choose! Find it in all Pragmatic Play online casinos.

We presented the games, and now it’s time to show you where to find them. All providers behind these magnificent games are major brands with dozens of specialized casino operators. In other words, finding the games won’t be hard – but we have a few venues that are equally festive when it comes to Halloween.

So, if you want to get into the holiday mood and enjoy our top Halloween slots, make sure to try them out in the following casinos.

Be sure to check out Rizk Casino whenever you feel like playing Allhalloween themed games. Rizk is a great place for such games, and the management often gets festive as well! They might even devise a popping online casino promotion – keep your eyes peeled in the next few days for exclusive promo announcements.

Royal Panda is a lively panda, so it enjoys vibrant holidays such as Halloween. Every year, the online casino delights its players with exciting promos and exclusive releases. Don’t miss them!

Another venue quite famous for its spirited nature, Mr Green is the king of Halloween slot festivities. Trick or treating is its job – so players often get treats (rather than pulled tricks). Visit the casino and discover what the operator prepared for this year’s Hallows Eve. The Halloween slots will surely not disappoint this year!