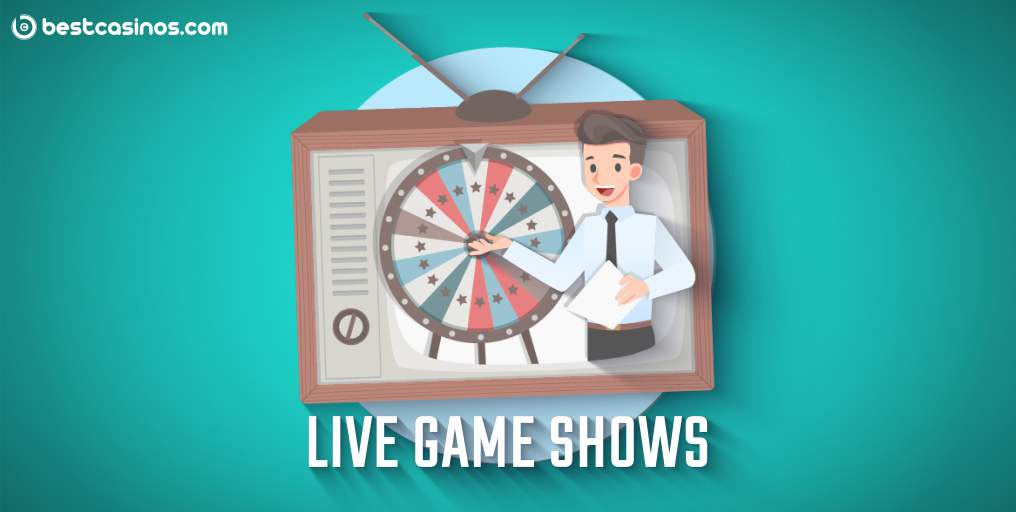 Live game shows – an ever-entertaining crossover between reality TV and online gambling. Today, live entertainment shows are the main attractions at gambling websites, but they were merely a figment of our imagination just a couple of years ago.

If you want a brief introduction to live game shows, as well as a detailed guide for navigating the world of gambling entertainment shows, you’re at the right place. BestCasinos team gathered all the intel on live game shows, the most popular games, and casinos with the best reality TV gambling games.

What Are Live Game Shows?

Live game shows are online casino games that are in a format of a TV game show, but the games include real-money wagering. The action is happening in real time, and players who tune in watch the host and the game rounds play out as they decide whether they want to participate with real-money wagers or just stay as observers.

At the moment, three big game producers dabble in shows of this calibre – Evolution, Playtech, and Pragmatic Play. Other providers have tried their hand at real-time gambling entertainment, but no one does it on the level of the three mentioned companies.

How do you know if live game shows are for you?

Well, if you are into high-risk gambling in real time but one that’s not repetitive or in any way boring, game shows might be up your alley. Some of the perks of playing game shows in live mode entail:

On top of all these listed perks, you also get the advantages of regular live casino tables such as professional live support, live chat with other players, expert hosts, and 24/7 availability. Moreover, most game shows are now going for unlimited scalability. Hence, there are no limits in terms of seats and round participants.

The Best Live Game Shows to Play for Real Money

Now that we established that live casino game shows are an excellent way to enjoy gambling online, it’s time to list our all-time favourites. If you’ve been around, most will be at least familiar to you, and you might have even tried some of them. But if they sound new to you, you should give them a spin.

Here are our top 10 live game shows of all time.

Monopoly Live is a wheel game which uses a wheel just like Dream Catcher. The game is so popular that Evolution decided to go a step further and release another. Monopoly Big Baller joined the fray in 2022 and quickly proved the unparalleled quality few companies can boast.

Dream Catcher is the first-ever live game show release for Evolution, the uncrowned king of live dealer gambling entertainment.  Moreover, Dream Catcher is a money wheel type of game, where there’s a live money wheel operated by a host. The game presenter leads the rounds by spinning the wheel and announcing the outcome of every round.

Even though Evolution has since released several highly acclaimed game shows of a similar calibre, the Dream Catcher remains one of the most beloved releases for two reasons. Firstly, it is the OG game show by Evolution, and secondly, it has some of the simplest game rules we’ve ever seen.

Another ultra-exclusive release for Evolution you won’t find anywhere else. Mega Ball is a relatively new game – younger than Dream Catcher and Monopoly Live – but it’s extremely well-known around the world.

Mega Ball is a lottery-style game that is the closest thing to bingo that you can find in Evolution’s lobby. It features a colourful studio, a custom-built ball drawing machine with 51 balls, and a game presenter announcing drawn ball numbers carrying a potentially big reward for you. The whole concept of the game relies on purchasable cards with pre-determined values – and each card can be a potentially winning one for you.

This is the crown jewel in Evolution’s portfolio. Crazy Time came out at a time when the industry was still mulling over the decision to popularise game shows or discard them. And Crazy Time did what it was supposed to do – it convinced everyone that game shows in online casinos are definitely a top-tier choice of entertainment.

Crazy Time has four different bonus games that you can enter and enjoy. That makes it a 4-in-1 entertainment show, which means there’s virtually no chance to get bored at any time. Evolution even built an impressive studio which accommodates four corners designed for special bonus rounds.

Alice in Wonderland is known worldwide and often served as inspiration in the casino world both for slots and classic tables. However, Playtech took things to a whole new level with Adventures Beyond Wonderland, a live casino solution with a revolving studio and augmented reality. Playtech already had a successful slot with the same name, and the show bridges the gap between impersonal video slots and lively gambling floors.

You get to see game presenters clad in recognizable costumes while they dance around the custom-built studio. Besides the upbeat base game, there are also three bonus rounds – March of the Card Soldiers, Magic Dice and the Caterpillar Mystery Bubble.

Who Wants to Be a Millionaire Live Roulette

Who Wants to Be a Millionaire is perhaps the most famous TV game show in the world. Almost every country has its own version, and Playtech decided to bring it into the online casino world as well. But Playtech had to sign an exclusive deal with Sony Pictures Television to get exclusive rights to the franchise.

Out of all the listed games on this list, Boom City is perhaps the youngest. But that doesn’t make it the least popular one. Boom City is a live dice game, but with a very unique twist – there’s a massive board, exciting features, and a whopping 20,000x win potential.

Game rules may be a bit complicated at first, especially for novices and players inexperienced in the live gambling arena. But worry not – game presenters are there to show you around and help you reach the wins by navigating the numerous bonus features and add-ons. If you like dice games, be sure to give this Pragmatic Play live gameshow a chance.

Another unique release from Pragmatic Play which we felt we must include on our master list is Mega Wheel. Mega Wheel is a money-wheel game, and you understand how important money-wheel games are for game shows. Money wheels are almost a genre on their own, and no list of top 10 gameshows could be considered serious without Mega Wheel.

It is not as eventful as other games on this list – think Crazy Time – but it’s definitely entertaining and upbeat enough to keep you occupied for hours. Players can keep track of the action and chat with other players via live chat at all times, while friendly hosts keep the atmosphere light and lively.

The year 2021 was big for Playtech and its gameshow portfolio. Besides Who Wants to Be a Millionaire 5-year contract and the release of Adventures Beyond Wonderland, the leading supplier also released the Live Money Drop. Live Money Drop is adapted from the UK’s The Million Pound Drop, and later The £100k Drop, which in turn exists in over 50 other countries.

The Live Money Drop can be considered a sequel to Deal or No Deal Big Draw as both are created in collaboration with Banijay Brands. Live Money Drop relies on four drop zones, with one being a secure spot and three tricky ones which could destroy your winning chances within just one second.

Deal or No Deal Live

Deal or No Deal is a unique gameshow accommodating an unlimited number of players. The game is all about suitcases, each potentially carrying a prize you don’t want to miss out on. The first Deal or No Deal Live to reach the audience is from Evolution, with Playtech joining with Deal or No Deal Big Draw.

What good do these games mean if you don’t have a good online casino to try them out at?

Don’t worry, here’s a list of the best live casino websites that are perfect for playing live game shows for real money.

As you can see, the list features some of the biggest brands in the game – Mr Green, BitCasino.io – but there are so many casinos where playing live game shows for real money is worth the effort. Check out these venues or swing by our full live casino database for more sites with the best live game shows in 2023.

As you’ve seen here – live game shows, the rising star of live dealer gambling, are slowly taking over the real-time gaming niche. In a way, live game shows are perfect for players who want to experience the real thrills of gambling online but in a new, inventive way – by playing world-famous TV shows and winning actual money!

We’ve introduced you to some of the most popular live game shows of all time, but don’t worry, there’s more where that came from. This year is sure to bring forth a flurry of new game shows, so stay tuned! And if you still have unanswered questions about live game shows, scroll down to find our answers.

the RTP depends from game to game. Not all game shows share an RTP as they are not all uniform like other traditional gambling games such as roulette and blackjack. Luckily, every game producer highlights the Return to Player rate when releasing every game.

Unfortunately, no, you cannot play game shows for free. Game shows are a form of live gambling, and no live dealer tables are available for fun, they can only be played for real money.

Yes, they are. Most new releases are made to fit every screen (and many are built using a mobile-first approach) so there’s always a focus on a smaller screens such as smartphones and tablets.

There is no uniform strategy for playing entertainment shows on the internet. Just like regular TV shows, gambling versions are just as much as unpredictable, so the only way to ensure a safe experience is to limit your budget and stay vigilant when placing wagers.

That’s a loaded question. Dice games are becoming more and more popular these days, so we cannot really pick only one live game show with dice to highlight. However, some of our favourites include Lightning Dice – an absolute trendsetter – but you should check out Football Studio Dice, and Mega Sic Bo.