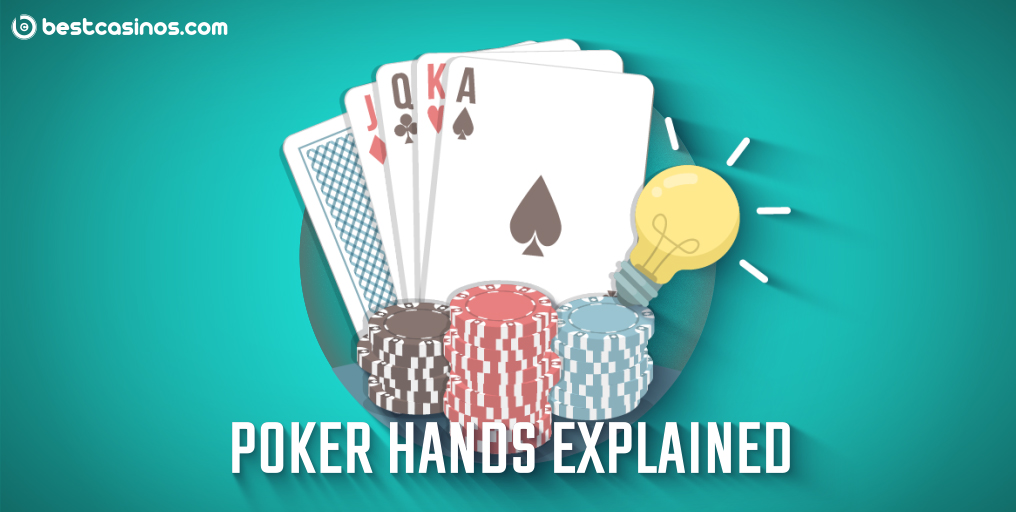 Poker hands are combinations of 5 cards used to determine the winner of the round. The better the hand, the better your winning chances to score a win.

In this article, we will discuss the ten possible poker hands that you can create when playing poker for real money, which might bring you a win. If you want to learn everything there is to know about poker hands, read our guide below.

In poker, you officially have 10 poker hands that can lead you to a win. To win, your hand will have to be higher in rank than the opponent’s. Sure, a poker hand might not always mean a certain win as you might bluff your way to the top in real-time poker, but online poker works based on the following 10 valid hands.

Here are the hands listed according to their rank:

Having one high card in the hand of 5 cards might sound like a weak hand, but weirder things have happened than winning a hand with a high card only. On the other side of the spectrum is the Royal Flush which trumps all card combinations that you can think of. Let’s see what each card combo means for you.

A High Card is the weakest of all ten poker hands. It is by far the frailest combo that you can have in the hand, and it rarely brings a win. In other words, you do not want to have a high card in your hands only.

Here is what a High Card poker hand look like:

Even though High Card hands are considered unfavourable for you, they are one of the most common possibilities. The chances of landing this hand are more than 50%, which means you are likely going to see this hand more times than you want to.

What we said for High Card applies here. This is not a great hand to have, as it is the second-worst in the set of 10 hands. Like its predecessor, you are probably not going to like having it in your set, but it is what it is.

The core of this hand is a pair of cards, plus three kickers.

Here is what a One Pair poker hand looks like:

The hand exemplified above sports a combination of K, K, 8, 6, and 3, out of which the double Kings constitute a pair. The essence of a One Pair hand is the single pair of cards. If two players happen to have both One Pair hands, and they are the only ones left in the round, the winner is the player whose pair has the higher rank. For instance, if player A has a pair of 8s, and player B has a pair of Aces, the winner is the player with a pair of Aces.

To win with a single pair, you will have to hope that no one at the table has anything better, which is – frankly speaking – almost impossible. (emphasis on the almost).

Take One Pair hand and multiply it by two and you get the Two Pair hand in poker. The thing about this poker hand is that it relies on a couple of pairs to be the highest ranks at the table. Rarer than a High Card and One Pair, but also has more value.

Here is what a Two Pair poker hand looks like:

As you can see, a Two Pair hand has two separate pairs of cards. They are not of the same value or rank, or else they’d constitute different hands. The hand shown here has a pair of Aces and a pair of 8s. Two Pairs are rarer than a single pair, but not exactly unheard of. The fifth card called the kicker serves little to no purpose. However, it may come in handy if the first two hands are identical for two players.

In case you and another player get the same poker hand consisting of a pair of pairs, the combo with the higher rank wins. For instance, if both have a pair of Aces, the other pair determines the winner. The proper way to determine the rank is to rank first by the first pair, then the second, and finally, by the kicker.

Three of a Kind

A Three of a Kind poker hand consists of three identical cards matching in rank, as well as two cards that do not form any kind of link with the three first cards. This is a bit better than the previous hands, but it’s still too weak to guarantee a win in the end.

Here is how a Three of a Kind poker hand looks like:

Here depicted is a Three of a Kind poker hand that consists of:

In case this sounds familiar, it’s because Three of a Kind is often used as a side bet in blackjack games. Online blackjack is always filled with several side bets, and most of them refer to a poker hand that brings you wins besides the main action.

The reason why Three of a Kind is better than Two Pair (although one consists of three cards and Two Pair has four important cards) is that a Three of a Kind hand is less likely to land than Two Pairs. That’s right, you have more chances to land a pair of pairs than to land three identical cards in a single hand. That’s why this hand beats the previous one described.

A Straight poker hand is a hand consisting of five cards in a sequence. That sequence of cards is ordered by rank, but cards are not of the same suit. If they are of the same suit, that’s a Straight Flush, which we’ll talk about later.

Here is what a Straight poker hand looks like:

Flush is a poker hand with five cards of the same suit. They are not in a sequence like Straight poker hands are. Instead, the cards need to meet only one requirement – to be of the same suit. An example is a K, 10, 7, 6, 4, which is called a King-high Flush.

Here is what a Flush poker hand looks like:

A Flush easily beats a Straight, Two Pairs, Three of a Kind, and a Pair. However, a Full House and all subsequently higher-ranked poker hands are stronger than a Flush. The proper way to rank Flushes is to rank them first by the rank of the highest-ranking card, then by the second-ranking card, then third, fourth, and finally, the fifth-ranking card.

Ace-to-five low rules do not accept Flushes as a valid poker hand ranking.

Full House in poker refers to a poker hand consisting of a pair and three-of-a-kind. With Full House, you have high winning chances, as everything after a Flush in terms of rank can easily bring you a win. Another name for this hand is ‘full boat’ or ‘full hand’.

To create a Full House, you need a single pair alongside a Three of a Kind poker hand. In other words, there should be no kickers.

Here is what a Full House poker hand looks like:

As you can easily see, a Full House hand in poker in our example is created from a combo of a pair of Kings and three 5s. The K, K, 5, 5, 5 Full House set is ranked first by the triplet of the cards and then by the pair. Hence, if you had a 7, 7, 7, Q, Q hand, it would rank higher than the hand exemplified in the image above. Vice versa, a hand of 4, 4, 4, A, A, would be lower than our example.

The suit does not play an important role here. Therefore, if two punters have identical poker hands – full hands – which differ only in suits, their hands will be considered equal.

Four of a Kind

Four of a Kind in poker is a hand consisting of four cards of identical rank in different suits, and a single kicker. The Four of a Kind poker hand is higher in rank than a Full House, Flush, and Straight, but it a Straight or Royal Flush can easily beat it.

Here is how a Four of a Kind poker hand looks like:

Players also call this hand ‘quads’, as it requires four matching cards in different suits. This is an exceptionally hard hand to come by, as it would mean you need to collect a rank in all four suits – like four 6s like in the example above.

It’s a decent poker hand and one that can easily result in a win, considering it’s the third-highest combo in poker hand ranking.

Here is what a Straight Flush poker hand looks like:

The Straight Flush is lower than a Royal Flush, and Five of a Kind, a rarely included poker hand. Straight Flush beats Four of a Kind as well as all other lower-ranking hands in poker.

If you are playing high rules, the Ace can be both high and low, but you cannot combine a hand such as Q, K, A, 2, and 3 – because the Ace cannot be both at the same time. Deuce-to-Seven low rules consider Aces always high, while Ace-to-Six considers Aces always low.

Here is what a Royal Flush poker hand looks like:

An Ace-high Straight Flush called a Royal Flush consists of a 10, J, Q, K, and A. They are all in the same suit! This hand is the highest-ranking hand in Ace-high poker games where Wilds/Jokers are not included.

On the other hand, a combination of A, 2, 3, 4, and 5 is a five-high Straight Flush we call a Steel Wheel. The Steel Wheel is the best low hand and the e best high hand in Ace-to-

Poker hand rankings are not a mystery or a hard lesson to learn. However, to play poker online for real money, the main thing any player must do is learn the poker hand rankings. Plus, you must remember the proper way to rank hands in poker – especially if you are playing live poker online.

Stay tuned for more info about poker live and online games and make sure to read our poker game reviews before you go play poker online for real money. Please gamble responsibly!