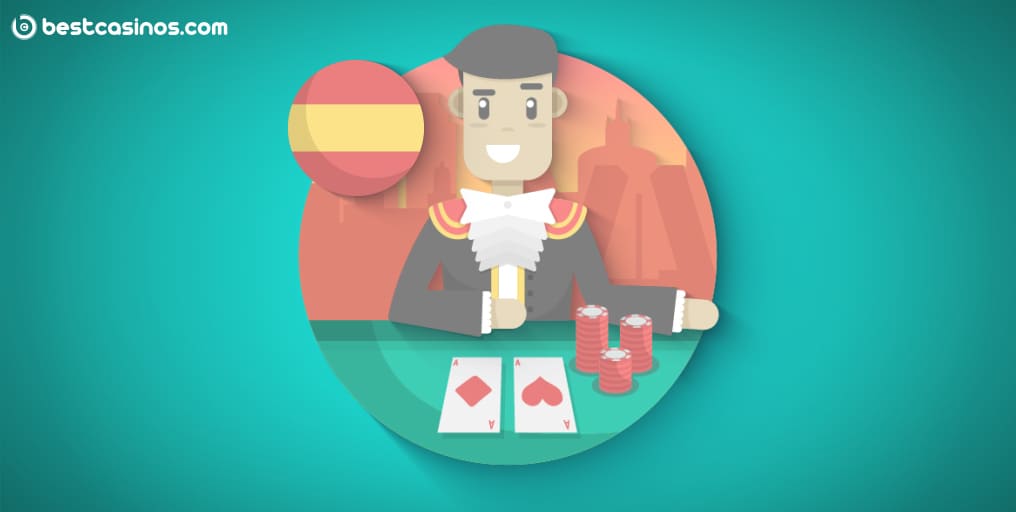 Spanish 21, or How to Play Blackjack Without 10s

The popularity of Blackjack knows no limits. The game is a fan-favourite pastime across the globe and has been for decades. A direct consequence of such outreach is the overabundance of exciting variants. And one such variant with an army of loyal fans is Spanish 21.

If you want to learn more about Spanish 21, its rules, and traits, stick with BestCasinos. We are about to show you all through a detailed guide brimming with the best Spanish 21 strategies and tips.

Without further ado, meet Spanish 21 – the beautiful Colorado rendition of the game of Blackjack.

Spanish 21 is a Blackjack variant often found in online casinos across the globe. It’s quite popular, and you can locate it in the major US and Asian online casinos.

The game uses six to eight decks; it depends on the table. An interesting thing about the shoe is that it misses all 10s.

It is also the distinctive trait of this variation. Playing without 10s in the shoe might seem like a disadvantage for the punters, but it is anything but. The rules of the game ensure a great advantage for the players thanks to the low house edge of only 0.45% -0.78%. The only game with a potentially lower house advantage is Video Poker.

When it comes to prizes, this variation offers similar payouts as the standard version. Blackjack pays 3 to 2, while Insurance pays at 2:1. You can check out the full payouts list in one of the sections below.

Avid fans love the game for its simplicity and player-oriented rules. Let’s go over the key features you get by playing the game of Spanish Blackjack:

So, you are familiar with the basics of Spanish Blackjack. However, there is a lot left to learn. And what better way to learn than by diving into the history of the game?

We at BestCasinos like to know how a game came to be as trendy as it is right now.

The first thing you need to know about Spanish 21 is that it belongs to the Colorado-based Masque Publishing Inc. The innovative game developer produced and launched the game in 1995.

As soon as it came out, Spanish 21 went viral. The audience loved it so much that fellow game developers quickly sought to create their own titles to match Masque. However, there lies the catch.

Masque Publishing Inc. is the owner of the name and is the only game developer which has the table game Spanish 21 in its portfolio.

Other titles you can find in major online casinos are variations of the same game, with creative titles which only sound similar to the original. We refer to those titles as Spanish Blackjack tables.

In other parts of the world, especially in Asia, an alternative for this variant exists, but with certain changes in the layout and rules. This alternative type goes by the name of Pontoon, which is a common game played in online casinos.

The Difference Between Spanish 21 and Regular Blackjack 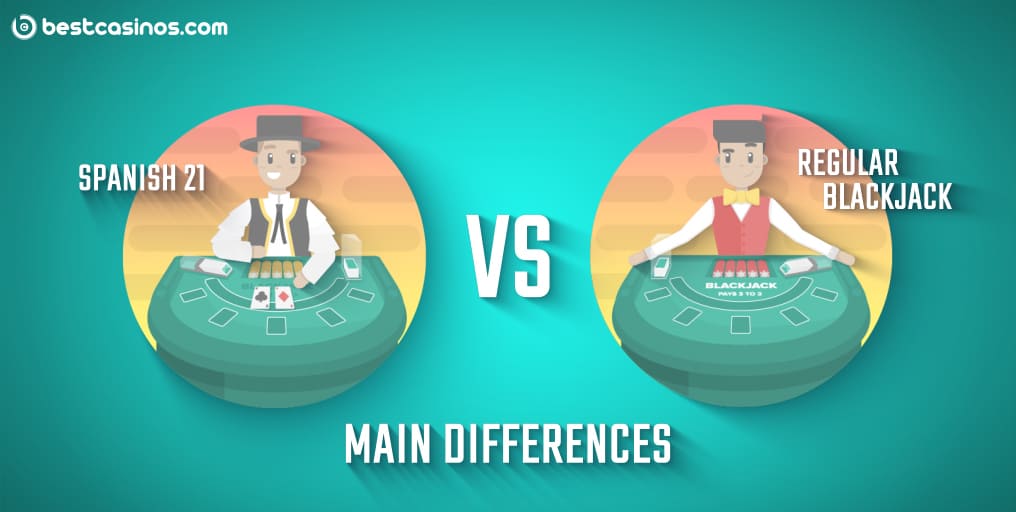 Now, the million-dollar question: what is the difference between European Blackjack and the Spanish one?

The simplest and shortest answer is – the Spanish version has no 10s in the shoe.

This might sound like a trivial thing, but every casino player will tell you that such a deficit has a major impact on the gameplay.

In the beginning, punters thought this exclusion gives a better advantage to the house. That would be, to a certain extent, true – were it not for the relaxed rules.

Namely, what the game lacks in flexibility, it compensates with additional player-friendly guidelines.

For instance, the player’s 21 always wins, even if the dealer has it too. This rule helps with the odds, as it’s generally more difficult to score a twenty-one if you don’t have tens in the cards.

Another difference is that European Blackjack doesn’t rely on side bets that much. In our exciting Colorado version (and similar), we have the opposite case. The game is flush with lucrative bonus bets you can enjoy next to the base rounds.

Finally, the payouts are the same, but the dealer hits on soft 17. It stands on hard 17, though. Oh, and you can re-split in the Spanish form an already split pair.

How to Play Spanish 21

We covered the most important items that were necessary for your introduction to Spanish Blackjack.

We concocted a detailed game walkthrough to help you out. If you are familiar with the regular rules, you will find that this version is quite easy to master.

Without further ado, let’s see how to play Spanish 21 and win.

The rules are simple: play your cards and beat the croupier.

Okay, it sounds easy, but it is easier said than done. The absence of 10s greatly hinders your winning chances. But fear not, the rules are there to help you out.

Each round starts with placing bets. You pick the amount that you are willing to stake on the round, as well as additional bets. We’ll discuss the bonus bets in a moment, but let’s first focus on the base game.

After you place your bet, the card dealing will start. Both the croupier and the player receive two cards. One of the dealer’s cards is a hole card (face-down).  Your goal here is to reach 21 and to be better than the dealer at that.

After every card deal, you get to choose whether you want to Hit, Stand, or Double. If you get a pair, you can Split – and even re-split if you get another pair afterwards. Plus, the total number of consecutive splits allowed here is three – i.e. you can have four hands. If you re-split hands and win, the payout is 1:1. You can also Double after a Split.

A Push doesn’t exist here. If both the player and the dealer hit 21 at the same time, the player wins. This is a substitution rule that brings the house edge back to the balance. Otherwise, the house would have a greater advantage over the players, which is not fun at all. But one thing that does exist instead of a Push is the Late Surrender. This is amazing because you can surrender even after you double down. That is not a typical trait of Blackjack variants, which makes Spanish Blackjack a truly magnificent – and unique – version.

In case you decide to spice up your gameplay but are not sure how you can use the side bets. Side bets in Spanish Blackjack are aplenty. Below is the Payouts section, we have laid out all rates for any additional combination that you can wager on.

For instance, you can wager on a 5-card winning hand that would result in 21. You can also place a bet on the potential outcome of 21 that entails a 6, a 7, and an 8 – both in the same and different suits.

If you are lucky enough, you might win the amazing 50:1 payout for three 7s that matched with the dealer’s fourth 7.

However, the most common side bet that all players like to use is Match the Dealer. Let’s see what this side bet is all about.

Match the Dealer: A Popular Side Bet

Match the Dealer is not a revolutionary side bet. It’s quite common in European Blackjack variants. However, Spanish Blackjack takes this extra bet to a whole new level.

If you are to wager on this option, you would essentially put money on the chance that your first cards match with the dealer. It can be the first or the second – or both – cards that are identical to the dealer’s face-up card.

We do not have to tell you that this one is extremely hard to catch. As far as side bets go, this one is lucrative, but that is because the odds are not exactly in your favour.

If you are playing a game with six decks, you can expect a prize worth 4:1 for a won Match the Dealer side bet. In the case of eight decks, the payout is 3:1. That goes for rank only.

If you match both the suit and the rank, you will get 9:1 in 6-deck shoe, while 8-deck shoe offers 12:1. If you succeed in matching both cards (an improbable case), the payouts for both rank and suit (for both cards) combines. The house edge for this side bet is 3%, which is a lot higher than for the base game.

The most important part of the game for any player – besides the rules – is the paytable. The table shows you how much you stand to gain in case of a winning hand.

Among the numerous variants of this game, Spanish Blackjack has the best odds. However, the payouts are quite similar to the European variant.

Below you will find a table that displays all the great pay rates for each card combination in Spanish Blackjack. 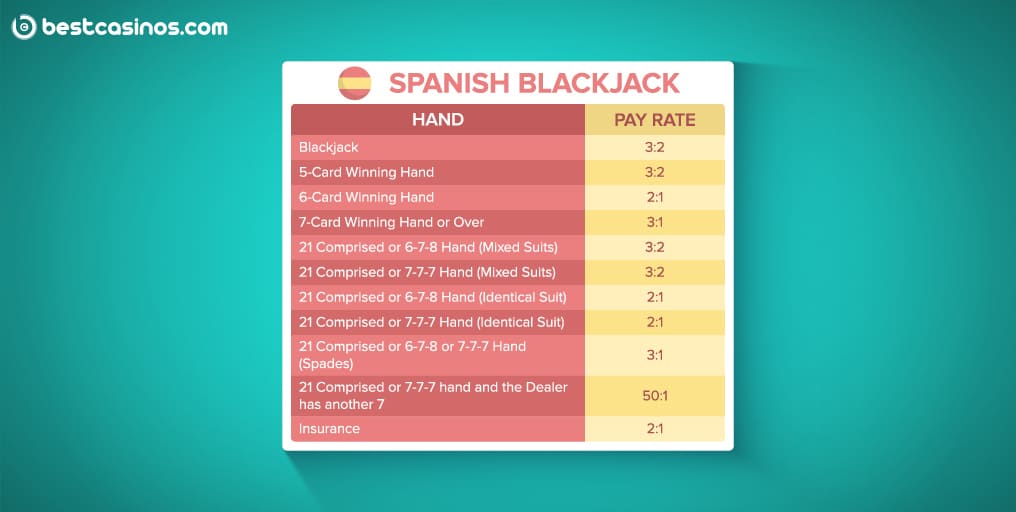 As you can see, you have the option to take insurance here as well. However, we would strongly recommend avoiding this option. If you go for insurance, prepare yourself for one of the worst house edges in Blackjack as it is 24.7%. That is by far the worst bet that you can take in any casino game.

The Best Strategies to Beat Spanish 21

Spanish 21 is not the only game that lacks 10s. We have seen Evolution Gaming do the same thing with its new Power Blackjack.

However, this game was the first variant to come without these cards.

When it first appeared, it brought an amazing refreshment to the gaming scene. Players were amazed by the game’s potential and user-friendly approach to online casino gaming.

But it also meant that the players had to get extra creative with strategies when playing this version.

In case you are wondering what to do the next time you find yourself at this table, just try to remember the following Spanish 21 strategy: 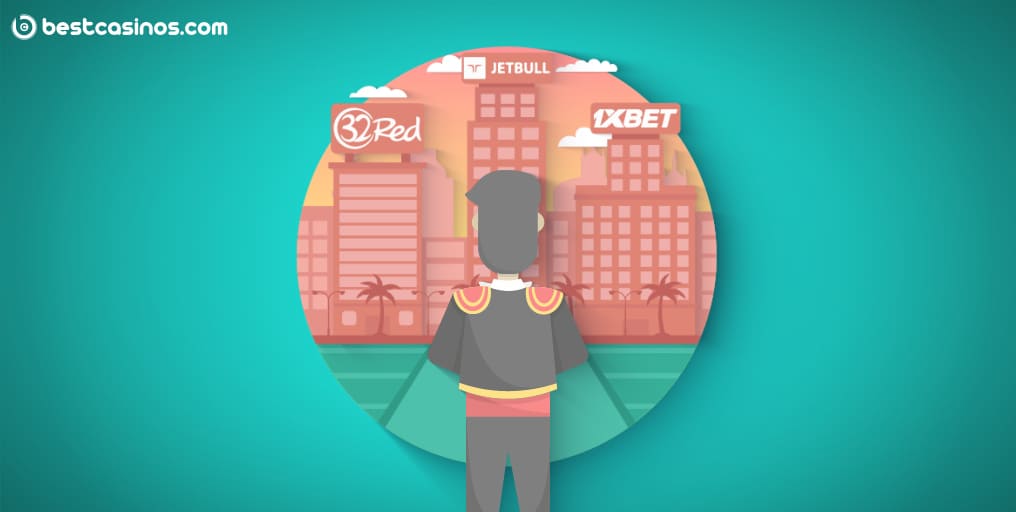 We have reviewed the game, its titles, but we didn’t forget about the casino sites. You are now fluent in Spanish 21, so it’s time to test your skills!

If you are looking for top online casinos that have the game on offer, it’s important to find a venue that’s reliable. For instance, casino sites regulated by the UKGC are 100% legit and trustworthy. One of the best casinos like that is 32Red. This website is perfect for any table game, and this unique variation has a special place here.

Another impressive casino brand on our list is Jetbull Casino. This site has a remarkable reputation for a venue that offers only premium-quality content. For hours of entertainment, don’t hesitate to pay a visit to Jetbull. You will not regret it.

Finally, one of the largest casinos in the world, 1xBet is also the home to several Spanish Blackjack games. They all come from Microgaming. And we all know what that means! When it comes to Blackjack, Microgaming is the industry leader. With its games, you can never go wrong.

From Colorado to Malaysia, Spanish 21’s popularity is of global proportions. It started as a variation of the traditional casino game where all 10s were left out from the decks. Today, that card deficit represents a major advantage for the players, especially considering the loose game rules.

If you want to play exclusive Blackjack but are bored with the regular editions, we strongly recommend trying Spanish Blackjack. The absence of 10s which means you use 48-card decks might seem disadvantageous, but it’s not. This game is one of the most player-oriented Blackjack variants in the industry! Easy rules, and a stellar 0.45-0.78% house edge guarantee frequent wins. Plus, you get to jazz things up with innovative Spanish 21 strategies!

A refreshing game that is both entertaining and rewarding – what more can we ask for?