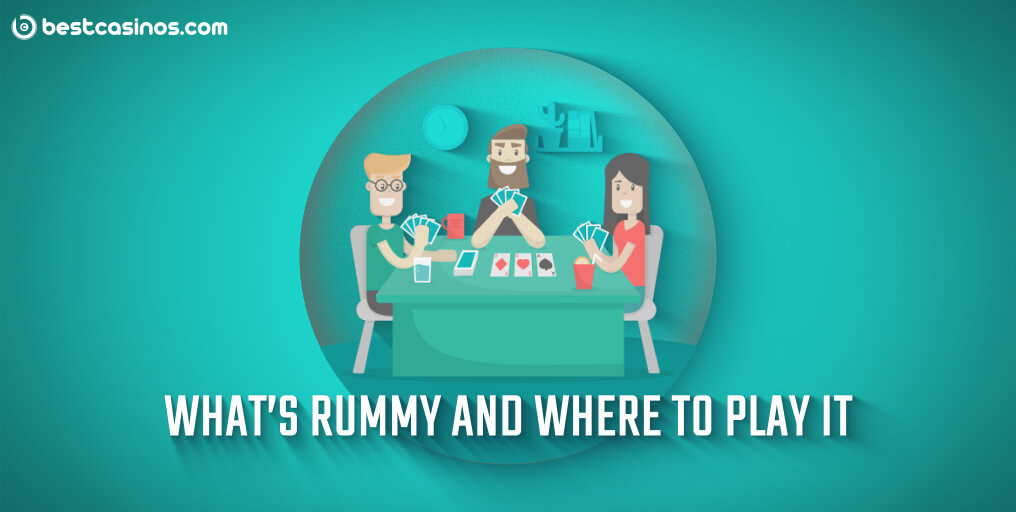 The Rummy Appeal – What’s Rummy and Where to Play It

In our previous articles, we opened a discussion about the preferences of our Asian players. We mentioned several games that are viral across the continent. However, another game is quite popular in numerous markets around the globe. And that, ladies and gentlemen, is Rummy, a game that deserves a whole article dedicated to its majestic appeal.

Hence, in this review, you will get a closer look at Rummy, one of the most popular games from India. We’ll talk about Rummy rules, infinite variations, and top-class Rummy strategies. Not the one to disappoint, we will also teach you how to play Rummy in some of the best online Rummy casinos across the world.

What Is Rummy & How to Play It?

Rummy is a matching card game that can be played in over 30 different ways. Today, traditional Rummy has fans across the globe, but the largest centre of popularity is in India. To properly understand the appeal of Rummy, let’s first discuss the history of the game. We will show you how the game became so famous outside the borders of its native continent. Then we will move onto the rules so that you can start learning to play Rummy like a pro.

Before it emerged as an online casino game, Rummy existed as a classic card game. History of Rummy, however, is a little bit ambiguous. The game that we today know as basic Rummy has significantly evolved over the years. One out of many theories suggests that Rummy is a descendant of the Mexican game Conquian. However, Conquian has many elements of the ancient Chinese game Khanhoo. Therefore, this theory creates ambiguity regarding the place of birth of the game. Either way, the game slowly found a way to spread across all continents. From Asia, Rummy subsequently reached India, where it became a household name. Even today, India is one of the most prominent and most prolific gaming markets when it comes to various forms of Rummy.

Due to its massive popularity in the traditional form, Rummy appeared in digital casinos as a form of online entertainment. Plus, most Rummy online casinos are in India, to no one’s surprise. If you want to play Rummy, online casinos in India are the place to visit.

Even though there are dozens of different versions of Rummy, the rules for each variant are simple. In this article, we mostly focus on the traditional Rummy, and so we will now explain the standard, basic rules for playing Rummy.

In this game, the main goal is to match cards of the same rank or suit to win. Each session uses a single 52-card deck. The player that disposes and melds all cards in his hands is the winner of the game.

When it comes to playing the game, it is relatively easy once you grasp the rules. The main point is to match cards by rank or suit. Another name for matching is melding. A valid meld consists of at least three cards. A run is a sequence of three or more cards in the same suit. On the table, there are always two piles – the stock and the discard pile. In each turn, players draw one card from the stock and discard one from their set onto the discard pile.

To win, you form melds so that ultimately, a single extra card remains to go onto the discard pile.

The rules can be quite overwhelming for novices. However, with time and practice, the game is sure to become your new favourite casino game. To enjoy the game even more regardless of your proficiency level, we came up with several useful strategies.

Bear in mind that the game has multiple variations, so the rules might sometimes shift. However, the following strategies apply to any Rummy variant you choose to play.

Strategy Number 1: Don’t Draw Discards Lest to Complete a Run

This might seem like an easy thing to do but trust us – you will be tempted. All players have a right to draw from the discard pile if they need it to complete a meld. However, if you choose to do this, you openly show the other players your plans. If you are completing a meld of 7s and an opponent has the final one, the chances of receiving it are slim. Moreover, this way, you don’t get to see which was the card in the stockpile.

Keep track of the cards that your opponents discarded. This strategy is useful if you want to figure out which cards to remove. If you see a player dispose of a certain card, that means that he doesn’t need it. And if you wish to complete his meld, you should dispose of the cards that are close to that card. Furthermore, if you are completing your meld, tracking the discarded cards allows you to see which ones are off the table.

Strategy Number 3: Get Rid of the Higher Cards First

This strategy applies to deadwood. Deadwood includes the cards that you cannot use for any meld. Before you make a knock (that’s the final move, usually leads to winning), you need to get rid of deadwood. However, someone might try to beat you to the punch. The best way to secure yourself against a massive loss is to get rid of the higher value deadwood. If someone knocks before you, you only have lower cards then, which is not a terrible loss.

Rummy is a game with countless variations. Today, the most played version is the traditional Rummy, the version that is our main topic for today. Currently, there are nearly 40 known variants. Here are the most popular ones.

The most successful version that is almost as popular as the traditional variant is Gin Rummy. In the next section, we will dedicate more time to explain the rules of Gin Rummy and show you how to play Gin Rummy in online casinos.

How is Gin Rummy Played?

If you want to learn how to play Gin Rummy, you have come to the right place.

The Gin variant is very similar to the traditional version. However, while most basic rules do apply, some of them are slightly altered to fit the new version. Without further ado, here are the most striking differences between traditional and Gin Rummy.

In the basic version, the number of players can be between two and six. On the other hand, Gin Rummy allows only two or four players in one session.

Traditional Rummy online has a random dealer algorithm. Simply put, the first dealer is random. In the following rounds, the honour goes to the next player on the left, meaning that there is a clockwise rotation. In Gin Rummy, players draw cards from the deck to determine who will be the dealer. The player with the lowest hand is the dealer for that round.

The Goal of the Game

The game objective is different for both variants. The basic variant’s main goal is to meld cards into sets or runs until the game runs out of turns or the players achieve the predetermined score. In the Gin variant, however, there is no such thing. Players play until one player knocks or lay down the cards.

The scoring principle for the basic Rummy is easier to grasp than in Gin Rummy. Nevertheless, Gin Rummy offers you more chances to win. Per the basic rules, all face cards are worth 10, while other cards have their face value (e.g. K is 10, 7 is 7). The total score at the end of the round is the sum of deadwood and winner’s overall score. In Gin Rummy, the situation is different – you can either go gin or knock. When going gin, the player receives 25 points for melding all cards and ending with no deadwood. With knocking, you do not have to have all cards in melds – you only need to have less than 10 in deadwood. When you knock, your score is the deadwood sum minus the opponent’s deadwood cards sum.

So, we have come to the end of our little expose. As you have seen, this is one of the oldest card games in the casino industry. Its popularity extends beyond its natural casino habitat. Players around the world enjoy playing Rummy because it is easy and fun. We showed you the standard rules for playing the original version that is also the most popular one. We also listed several useful strategies that will surely come in handy during your future game sessions. Plus, we introduced you to one of the most successful Gin Rummy variants that players in the USA adore playing.

Now that you have extensive knowledge about the game and its rules, it’s time to find a place to play. Below you will find a list of top-notch online casinos that offer Rummy games.

Each casino went through serious testing before we placed it on our list. Your job is only to sit back, relax, and start playing at some of the best Rummy casinos out there.