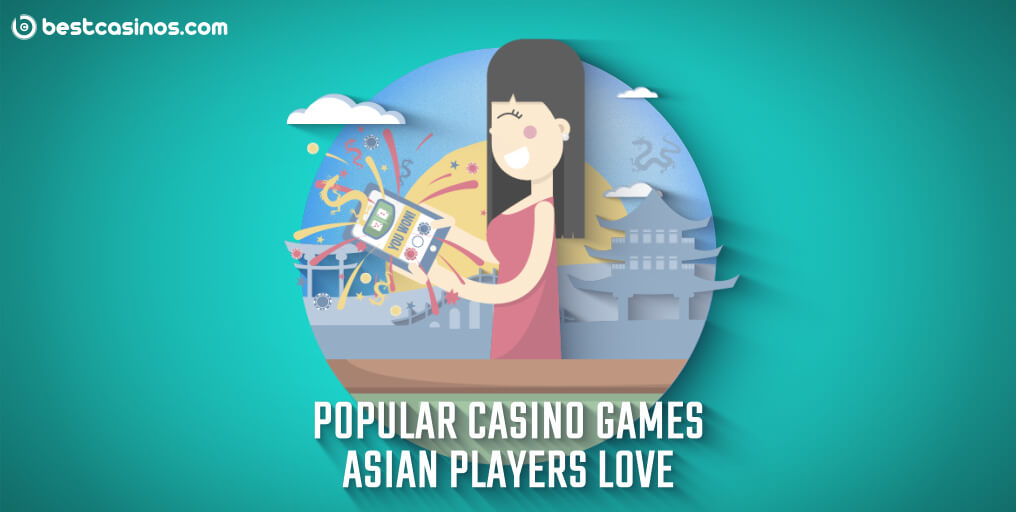 Gaming is a popular form of recreation in Asian countries and the article below details the most established Asian casino games you can find in gaming venues around the globe, both online and offline.

It has been for centuries, as numerous games originate from the region. And just like everything else, gaming evolved over the centuries, and today resembles the original version only slightly.

In this article today, we will have a look at some of the most popular games in Asia.

We will also address the digitalized versions of the games and show you their live dealer equivalents. Here is an overview of the games that we found to have the most appeal for Asian online casino players: 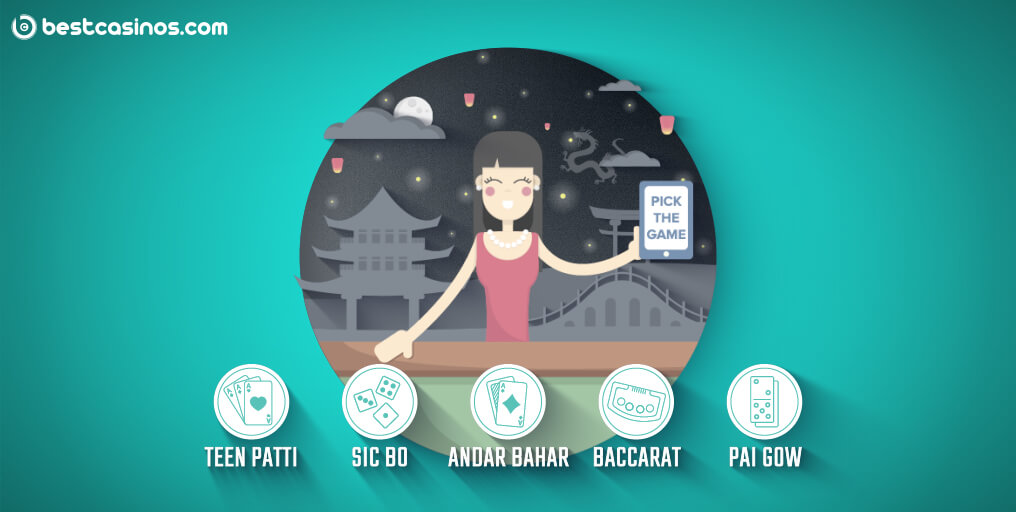 These games all have long histories and numerous versions behind them.

The fact that they are still quite popular speaks volumes about their importance for Asian players.

Without further ado, here are the full descriptions of the best games that Asian casino players enjoy playing in online casinos. 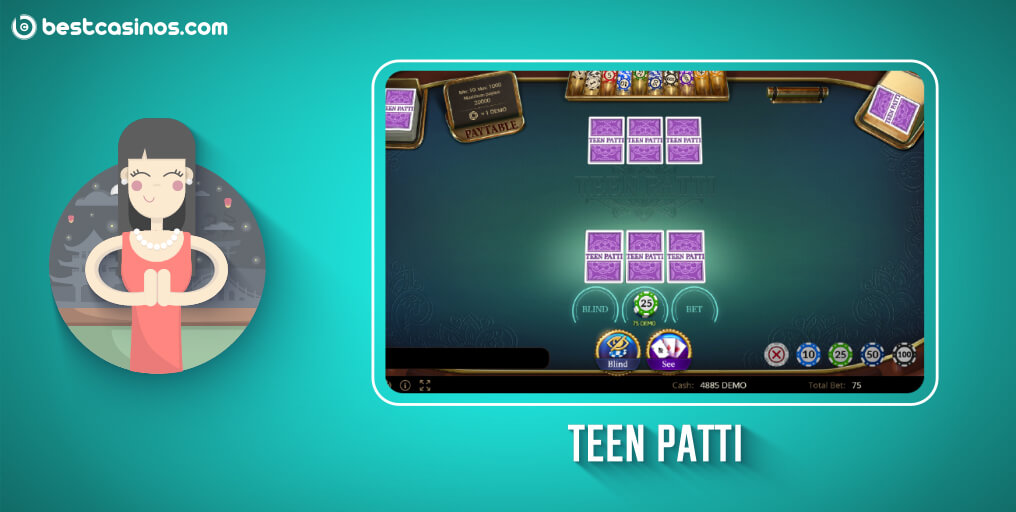 Teen Patti originates from India. In terms of the rules, Teen Patti resembles Poker the most. From 3 to 6 players can play at the same time with 52-card deck sans Jokers. At the start of the game, all players receive three cards that are face down.

The minimum stake amount – also known as the boot – is collected before each turn. The winner wins everything from the pot if, by the end of the game, has the highest or best hand. The highest hand is the Trail or Set, which is a sequence of three same-rank cards. Other hands are Pure Sequence, Sequence, Colour, Pair, and High Card.

This game is a popular choice for many players in Asia. The simplicity of the game is what attracted millions of players over the years. In online casinos, the introduction of Teen Patti helped promote online gaming in Asia. At first, players were reluctant to play other games, but the presence of Teen Patti helped a great deal. Today, Teen Patti is one of the most popular game in casinos, with hundreds of different variants. If you are interested in exploring the intriguing game, you can find it in various casinos.

Due to the increasing popularity of Teen Patti casino versions, it was not a surprise that developers decided to transfer the game into the live dealer sphere as well. The Teen Patti Live variant is as popular as the standard online casino variation.

Players enjoy all the perks previously established in regular versions, with a few extra features. The biggest advantage of the live variant is that it is played in real-time, so players can keep track of the game without losing the authentic feel of the game. Teen Patti Live is featured in various online casinos with live dealer studios. Some of these venues offer exclusive bonuses for players that like to play Teen Patti in real-time. 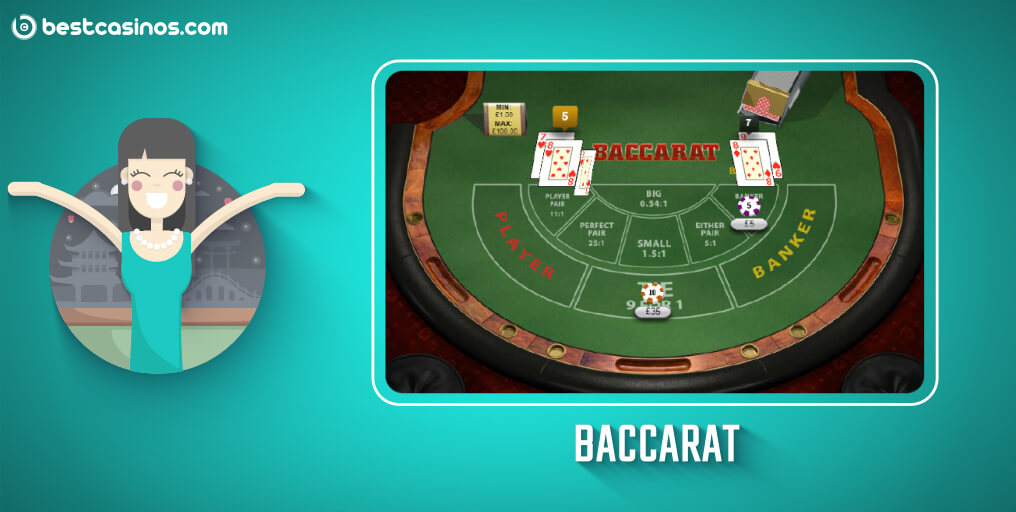 Baccarat is one of the most popular Asian casino games in the world. It is also one of the most accessible games to play. In Baccarat, the dealer does most of the work. It is up to the players to place their bets, and they have three options – Player, Banker, or Tie.

Before we explain each betting option, let’s first explain how the dealing works, although betting comes first. In each hand, the dealer deals two cards which serve as Banker’s cards and two more that are known as Player’s cards. Whoever lands closest to a total sum of 9 wins. Now, if the players believe the Player cards will win, they can place an amount on the Player bet. If they think the dealer will win, they put a Banker bet. Finally, the third option allows the players to bet on a tie. Cards 2-9 have a face value, while royals have 0 value. The Ace is worth 1. All three bets have different payout percentages. For example, the Player bet pays double, while Banker is 95% of the bet. Betting on Tie results in 8 to 1 payout.

Next to Roulette and Blackjack, Baccarat holds the top of casino entertainment around the globe. It is not a surprise, then, that players from Asia enjoy it as well. Online Baccarat is a well-known pick for countless players that frequent digital casinos there. Eminent providers recognized the significance of this game for the players, and they started putting more focus on Baccarat. Today, a casino without Baccarat in its offer is simply not worth visiting. If you are not familiar with Baccarat, you can visit any casino from our top list and play the game. You will learn the ropes in no time.

Providers like Evolution and Playtech are always updating their offers of live casino games. Naturally, that includes Baccarat as well. Evolution Gaming is currently the most famous creator of Baccarat Live variants. Its games attract thousands of players because they convey the essence of the game and provide delicate experiences not often seen in online casinos.

There is no difference between Baccarat and Baccarat Live, and so you won’t lose any part of the gaming experience. Baccarat Live can only provide a better experience because it is in real-time, and you can interact with other players. 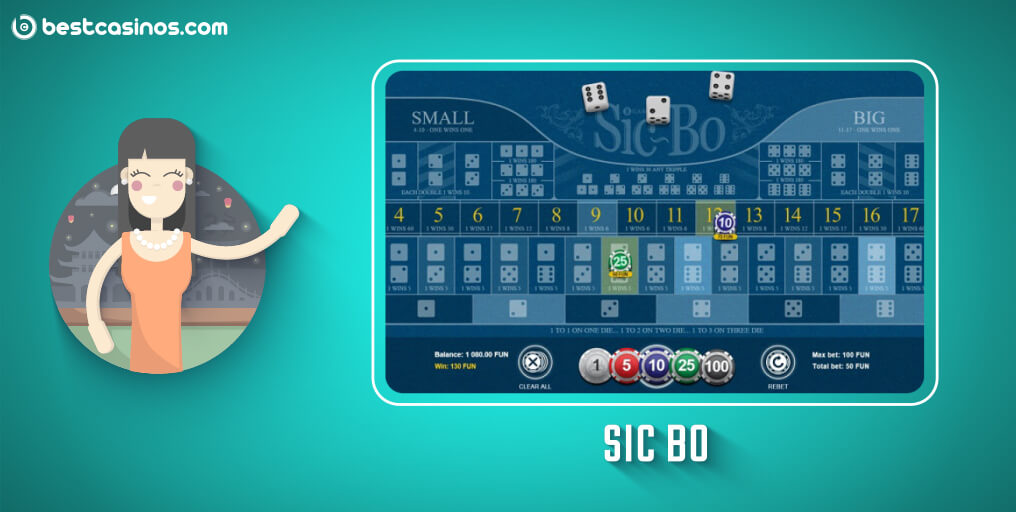 Sic Bo is an ancient Asian casino game that originates from China. It is typically played with three dice. Sic Bo is one of two casino games that make use of dice, the other one being Craps. Hence, the entire point lies in the roll of the dice. Players bet on the outcome of the roll. The first step is to place the bets, and then the dealer will shake a concealed box with the dice inside.

In online Sic Bo, the software randomly shakes the dice and shows the outcome to the players. If the predictions were right, the players win. It is that simple! As there are so many betting options, we will mention just a couple of the most famous ones. Punters can make use of Small and Big bets. There are also Single Dice Bets, Double and Triple bets, as well as the Domino Bet.

Other names for the game are tai sai and dai siu. Players outside China know it as big and small Hi-Lo. However, there is a catch with Sic Bo. The Sic Bo table might seem confusing at first, because of the numerous bets on display. That is why players often get the wrong assumption that it is difficult to learn. Nevertheless, that doesn’t stop the players from pursuing the game in numerous online casinos. Players that are interested in exploring traditional speciality casino games should try Sic Bo because it is very entertaining.

The online version of Sic Bo is quite accessible, but its live dealer counterpart is getting more and more recognition too. Over the past few years, both the providers and operators have worked tirelessly to bring Sic Bo to the live community. The result of all that hard work is a substantial number of Live Sic Bo variant.

Players enjoy the live version because it gives them an authentic feel usually seen only in Asian land-based casinos. The rules, like always, stay the same in the live casino game, except there is a real dealer. 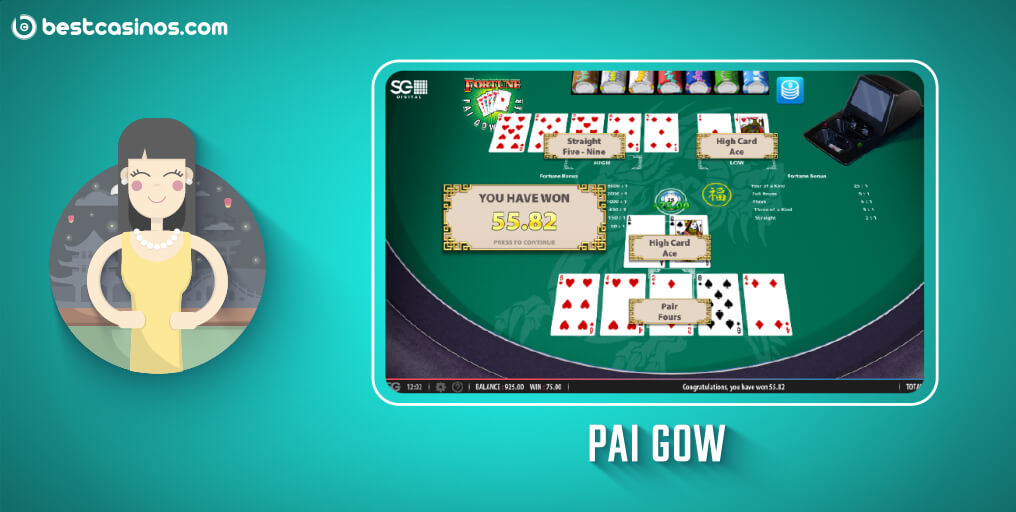 Pai Gow Poker is a casino version of Poker loosely based on Pai Gow. The original game is from China, and it usually involves a set of 32 Chinese dominoes. The poker version uses a deck of 52 cards plus a Joker. Playing this Asian casino game is easy – after placing bets, the dealer deals seven cards to players and seven reserves for himself.

The players’ cards are face-up, while the dealer does not reveal his cards until later. The task here is to arrange the cards and split them into two groups. One should consist of 5 and the other of 2 cards. The point is that the 2-card set should have a higher value than the other set. If both hands are higher than the dealers, the players win. Otherwise, punters lose their bet. If only one hand is better, then the hand is a push. The game comes with a house edge, of course.

The creation of Pai Gow Poker created waves in the online casino community. Today, this game is one of the most popular hobbies within online and land-based casinos. The original game is prevalent across all continents, including North America, Asia, Europe, and Australia. Its Poker-oriented version is just as popular. Betsoft is one of the most popular developers with Pai Gow Poker variants.

Pai Gow Poker is straightforward, so players will not have problems grasping the rules. That is why playing a live version is a great option. Not only the players get an exciting experience straight from a live studio, but they also get to enjoy a slower pace of the game. It is very relaxing, therefore players around the world like to combine online and live play. But both versions are equally enjoyable, and the choice depends on the players’ preference. 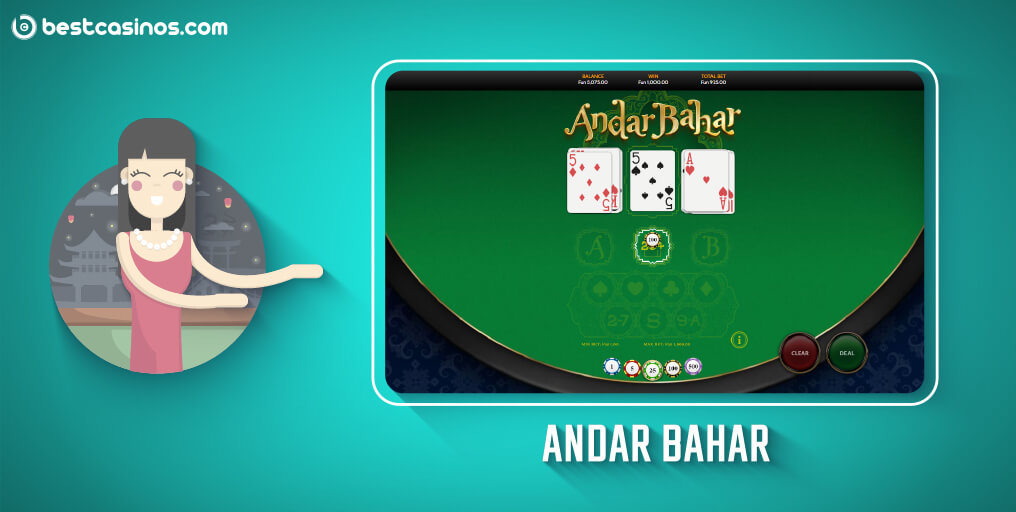 Andar Bahar comes from south of India. The rules are surprisingly simple. The punters play with a full card deck of 52 cards. At the start of the game, the dealer deals one card and puts it at the centre of the table. Then, the dealer will start dealing cards one at a time on each side of the single card.

The game ends when a dealer pulls out a card that matches the middle card. Now, the game is called Andar Bahar because Andar and Bahar represent the two main bets here. Essentially, both bets mean betting on a side that will land a matching card first. There are also side bets, for example, betting on the number of cards that pass in a round. Once the gamers get the gist of the game, playing turns into a fun endeavour that can last for hours.

Although the online version is an established part of a casino’s offering, the live version is not. That doesn’t mean that Andar Bahar is disliked – it just means that it is hard to find a casino with a live Andar Bahar variant. Nevertheless, in the past few years, there has been an increase of such titles in the casino industry.

There is still a lot of room to grow, and we hope that we will get to see more Andar Bahar titles in live casinos. For now, we have only a handful of live dealer titles that focus on this Asian casino game. One example is the 1xBet Casino which has a giant game library with diverse titles. 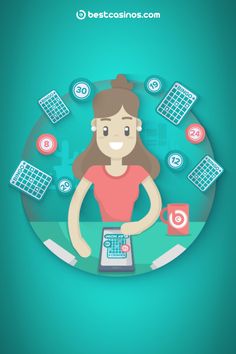 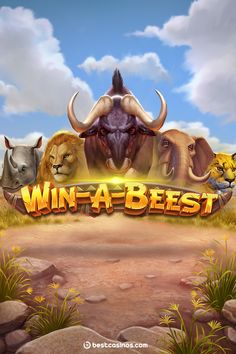 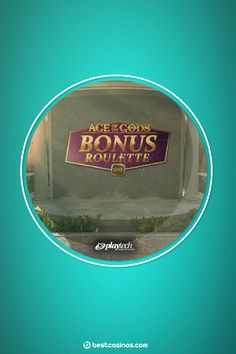 Fancy an Electric Scooter for This Summer Vacay? PlayOJO Has Your Back
· August 06, 2020