Microgaming is one of the largest global game developers and software providers.

They are immensely popular due to the quality and variety of the games that they offer to players. When it comes to choosing which Microgaming slot you next want to play, you might want to focus on those that give you the best odds of taking home a big win.

The percentage rate essentially describes the potential win for each game over a long time period, as it describes how much of your stake is likely to come back to you.

Now, we know there are hundreds of slots to choose from, so we’ve done the hard work for you and narrowed it down to the top seven Microgaming slots with the highest RTP rates, saving the best for last. 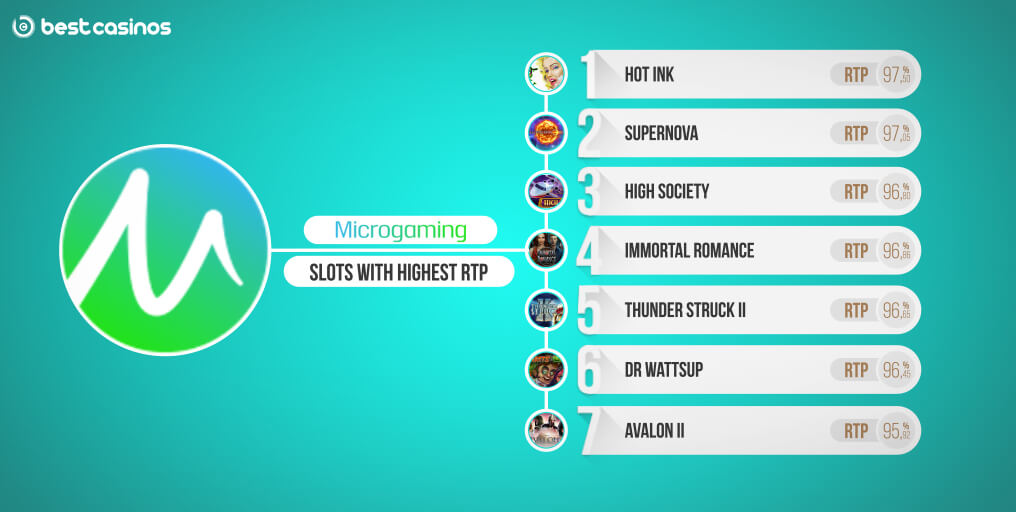 Avalon II is a 243 payline slot based on the legend of King Arthur and the roundtable. You can play it at a number of Microgaming-powered casinos, but here are some for your convenience:

The sequel to the hugely popular original slot Avalon, this latest game has graphics based on a beautiful medieval design, and the symbols feature Merlin, King Arthur, Morgana le Fey and Guinevere. The minimum bet is 0.30, whilst the maximum bet is 7.50. The Lady of the Lake is the Wild symbol in this game, and the scatter symbols are the Grails. If you are lucky enough to get three of them on the reels, you will have the chance to win big bonuses across eight bonus rounds.

Microgaming’s Dr Watts Up slot has always been a favourite with players due to its mad scientist theme. This 5 reel, 3 rows and 30 payline slot is set against a laboratory backdrop, and the symbols include robots, human brains and microscopes. Make sure to visit the following casinos for best experience with this game:

The minimum bet allowed is 0.30, whilst the maximum is 120. The Atom symbol is the scatter symbol, which can help you win 10, 15 or 20 free spins. To add a spice of excitement to this experiment, during free spin rounds, a random reel will turn wild to help boost your chances. The Wild is the Dr Watts Up logo, which can substitute for all symbols except the scatter and the bonus symbol, which is the Laboratory Mouse. Once the mouse lands on any position of rows 1, 3 or 5 then you are granted access to the Laboratory bonus game.

Thunderstruck II is a 5 reel, 243 payline video slot; a popular sequel to its just as popular predecessor, the original Thunderstruck slot. Based on Norse mythology, this visually striking slot game features many Norse gods on its reels, including powerful Thor, mischievous Loki and Odin. You can have fun with them right here:

These symbols can all trigger different bonuses. Thor’s hammer is a scatter symbol – if you get at least three of them then you can enter the Great Hall of Spins, which guards the bonus features. The wild symbol is the Thunderstruck II symbol, which can double your winnings when it ends up on the reels. Your minimum bet is 0.30, whilst the maximum you can bet per spin is 15.00.

Immortal Romance will appeal to any female players out there. Loosely based on vampire stories such as Twilight, and tales of eternal love that have entered into popular culture in the past few years, this five reels slot game has 243 paylines.This eternally popular title is available at the following venues:

Your minimum bet is 0.30 and your maximum bet is 6.00 per spin. Winning symbols include a beautiful young woman, two vampires, a glass of wine and a castle. However, the wild is the Immortal Romance pictogram, which can substitute for any other symbol except the scatter (lion doorknocker) and double your profits. If you get three scatter symbols then you’ll be allowed into the Chamber of Spins where you get a free spin round.

Microgaming’s High Society will take you into the world of the 1% and show you their life of luxury and glamour. Have a pop at a high-style living at the following casinos:

Fancy cars, private jets, gold bullion bars, yachts, diamond rings (basically all you could ever want), all feature as symbols in this amazing slot game; a 25 payline, 5 reel slot with a high RTP and a minimum bet of 0.25 and maximum bet of 50. The wild symbol is the High Society slot logo, which substitutes for all other symbols across the reels and paylines, but the wilds only come up on reels 1 and 5. The scatter symbol is a golden money clip binding €100 notes, and if you get 3, 4 or 5 of theses you will receive 10, 15 or 20 free spins respectively.

This 27 payline, 3 reel, Microgaming slot has an original theme based on space, comets and exploding stars. Take a trip into the universe by playing this game here:

The endless universe is the backdrop for this game, and soothing music accompanies your game play. The maximum bet is 50, whilst the minimum bet is 0.25. Supernova has a staggeringly high RTP which keeps players coming back again and again. The wild symbol is the Wild Orb symbol, and this game also boasts of an amazing Bonus Multiplier feature. If you trigger this feature, your wins on the first three reels will be multiplied by the multiplier that you’ve won.

Hot Ink is one of Microgaming’s most popular video slot games, based on an original theme of tattoo artists and tattoos. Wanna get inked? Play this game right here:

This 5 reel slot has an edgy, exciting feel to it, with a tattoo parlour as the backdrop, which is augmented by its amazing 1,024 paylines. The minimum bet is 0.50 and the maximum bet is 125. One bonus feature is that players can pay a nominal fee for a respin function, and if you pick up three or more Tattoo Bonus symbols you can win 10 free spins with a 2x multiplier. The second bonus feature is that if you receive three or more Pisces symbols, then you can trigger 20 free spins at a 2x multiplier.

Alternately, a top list of 7 best RTP slot games developed by NetEnt can be found here.

Enjoy the Weekend of Hearts at Energy Casino with Cash Prizes
· February 14, 2020