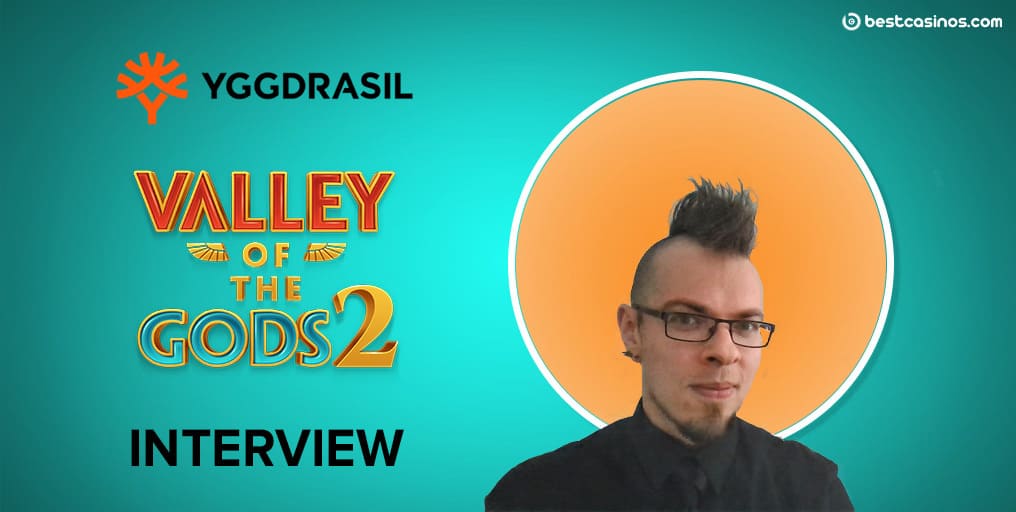 “The Next Step in the Journey Through the Valley” – Yggdrasil Interview

When it comes to slot innovation, no one does it better than Yggdrasil Gaming.

It seems that building revolutionary casino games and bending boundaries with each new release are not a challenge for the company anymore. Instead, it has become the company norm – changing the face of the industry is the way to go.

Flawless execution of any ingenious idea makes creating games look, at least for the rest of us, poised and easy. And Valley of the Gods 2 slot is a perfect example of that.

The sequel to one of the most loved Yggdrasil Gaming video slots is coming soon, and as Marcin Gorka would say, the “sheer anticipation is energizing”.

We are grateful to Yggdrasil Gaming’s Game Producer Marcin Gorka who took the time to talk with us about the new release, expectations, extraordinary features, and inspiration that the teams had for the latest release. In the exclusive interview below, we also had a chance to scratch under the surface of their creative processes behind each release and chat about game production.

If you’ve ever wanted to peek behind the curtain and see how it’s done over at Yggdrasil’s studio, here is your chance. 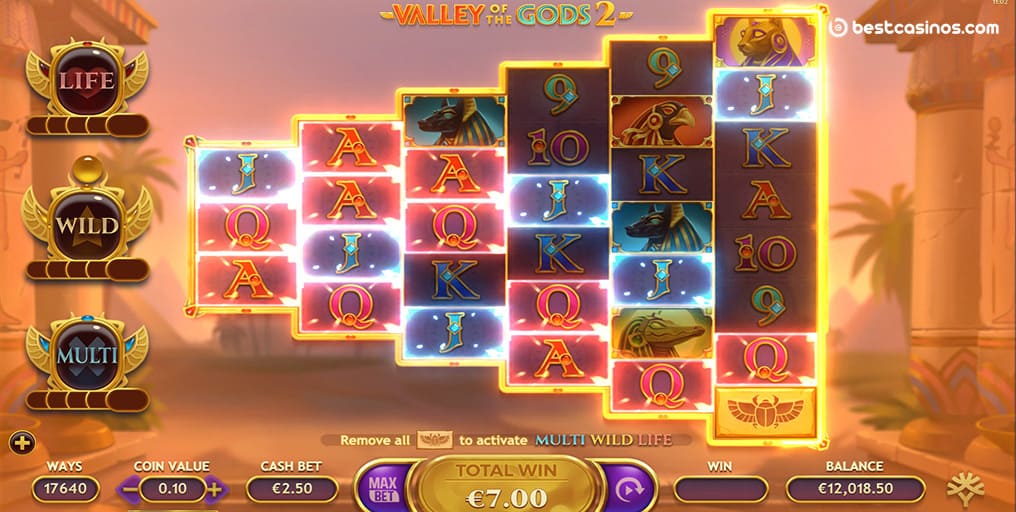 “We’re over the moon to unveil this one!”, Marcin Gorka begins.

“It’s a follow-up to a game that already has a sizeable player base. We’re inviting both the fans and the new players to venture deeper into the Valley, to find not only what they already know and like, but some surprises as well – namely, the thrilling potential that comes with the new reels shape and Goddess wild symbol combo. We hope that players will enjoy the game at least as much as we enjoyed making it!”

“The second instalment idea was with us for quite some time now; we love Valley of the Gods, and the sequel was a natural step. Lives and Multipliers made Valley what it is, and we wanted seasoned players to feel right at home. The new machine shape and Wild reel feature create huge potential; each next reel stopping can make a giant difference for the player, and the sheer anticipation is energizing“, Gorka continues.

“Our New Games Team and Mathematicians are an endless source of excellent ideas, including this one – lots of great teamwork and iterations came together to form and test the final concept.”

“It sincerely depends where we’d like to start counting. Since we started putting the idea to life full steam ahead, it was over half a year to develop the project, but the idea itself was in the works for much longer. The crucial part of the experience – the mechanics – were polished by our Mathematicians tirelessly throughout the project to balance just right, and that was an epic undertaking.”

“Time-wise, it always depends on the project. Of course, the deciding factor is the overall complexity, but the creative process is volatile – sometimes things just click, other times there are lots of tries until we get things just right. It can take from a few months to nearly a year to go through production”, Gorka explains.

“We start with a concept, which we battle test as much as possible. Sometimes the mechanic is strongly tied to a specific theme and won’t work without it; other times sky is the limit, and we can dress it up later almost any way we like.”

“In pre-production, we decide about all the little details that make the game both beautiful and fun – all the ways it will engage the players and let them know intuitively what’s happening throughout the game, regardless of the pacing.”

“Then comes development, interwoven with polishing the details that won’t be visible even in the best of blueprints – and lots, lots, lots of testing to get the top-notch quality Yggdrasil strives for“, Gorka rounds up the process of creating video slots. 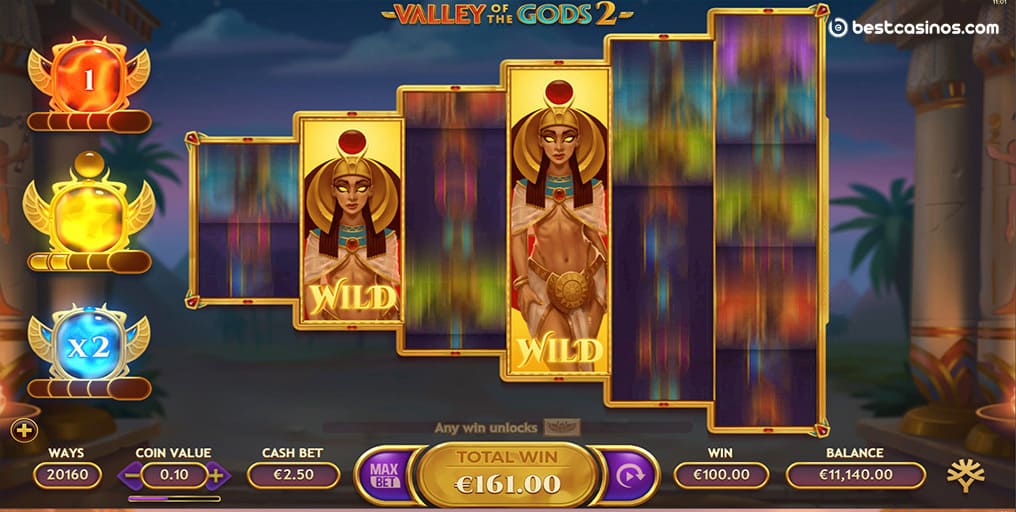 “Simply put: the game is exciting, and we wanted that to be visible from first glance. Egyptian theme offers a beautiful range of colors, and I think our Art Team went all-in on it, expanding on the mood set by the first installment.”

What can we say – we agree!

“The take on the theme is exciting – it starts with classic Egyptian visuals we know so well, which in itself has a hint of mystery to it, strengthened by the mystical elements of the Gods that oversee the Valley. The addition of the Goddess, who will appear to the resolute explorers, completes the image.”

“We’ve also emphasized the lights and FX – similarly to some of our other recent games – like Multifly! – creating effects I love, reminding me of classic slot and pinball machines (I’m a massive fan of the classic gaming experience).”

“Lives and Multipliers are the heartbeat of Valley, and are here to stay.”

“ The novel elements don’t try to change that, but rather work with them to expand on the experience.”

“The new machine shape adds a bit of intensity to the game – seeing that it’s an all ways paying game; thanks to reels becoming consecutively higher, long symbol combinations have even bigger potential to create immense payouts. And the wild reel is one of the best things that can happen to a lucky player – starting a winning combination or completing lots of ways to win further down the reels.”

“The Wild reel also features the Goddess in person, a figure that might hint on future mysteries that await the Valley players.”

“The mechanic Dave hinted at is one you will see very soon – just a month after Valley of the Gods 2, coming in – hot! – with Hyperburst.”

“More ways to win are a direct consequence of the grid makeover. The experience should be most rewarding for the players enjoying the more volatile gameplay – especially when they line up perfectly.” 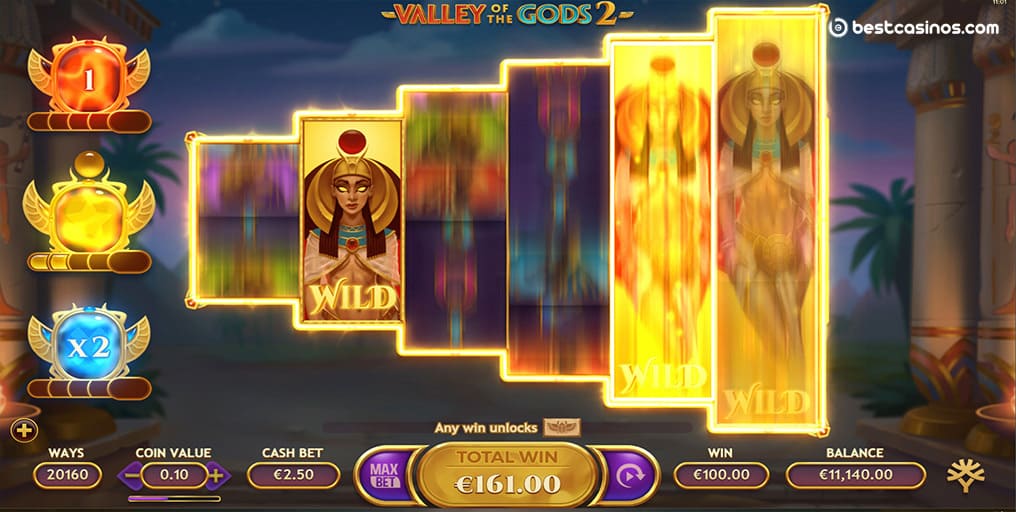 “For me, the grid was the key change in the overall experience. Valley is paying all ways; each consecutive reel has a bigger potential impact on the outcome. This makes each spin that much more exciting. When a combination lines up, wait for the next reel to stop is a wager in itself. I enjoy that anticipation, rising with each reel. And the win potential, of course – imagine a long combination completed by a wild reel in this setup!”

“I think even before the sandstorm in Valley of the Gods 2 settles, we’ll be thinking about the next stop in the journey through the Valley. I am sure it has many more secrets to be uncovered. As I’ve mentioned before, it’s not just an Egyptian pop-cultural collage, and the mystical & mystery notes in it are vital to the experience.”

“Apart from that, you should keep an eye out for our Gigablox games offering – not only they’re fiendishly enjoyable (I love the anticipation moments at the beginning of each spin), they might hold some secrets of their own as well!”

“As far as themes go, we’re experimenting with a vast amount of themes to expand our portfolio, so that all players can find a game they will love in there.”

And we certainly can! You have seen it here guys – Yggdrasil Gaming is bringing something hotter than the desert – pun intended – straight to your gaming screens with the new Valley of the Gods 2 slot release. Stay tuned for more info about Yggdrasil news, game releases, and exclusive announcements!