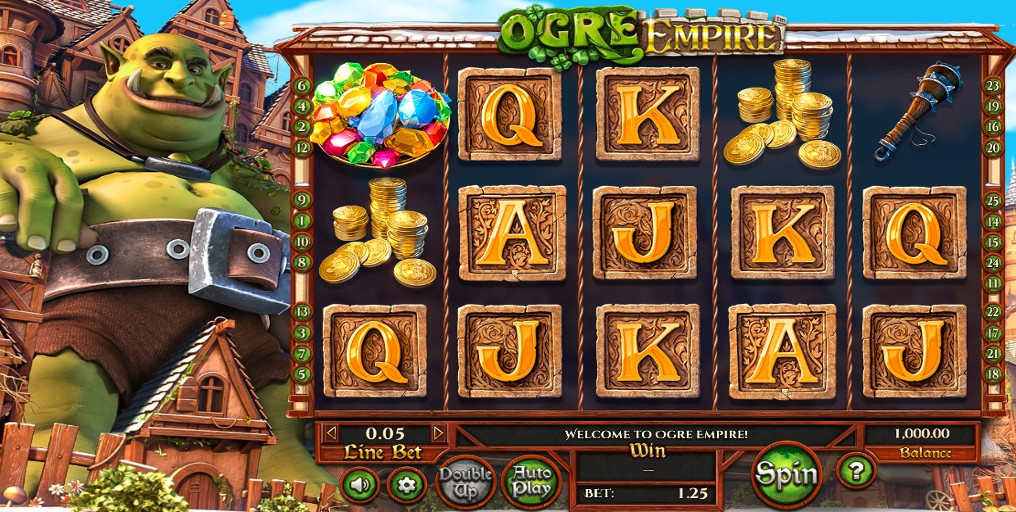 BetSoft is taking players on a mythical, exciting fantasy with the story-driven title Ogre Empire scheduled for release on 28 May.

With its five reels and 25 paylines, this whimsical fantasy is the latest addition to BetSoft’s Slots3 collection and puts players in control of the central day and night cycle with the full-height symbols. You join the people of this fantasy kingdom and experience what is life for them while fighting with the Ogre problem. During the day, the Ogre is active while the townsfolk sleep but when the night falls, he is the one that falls asleep and the King and his loyal people come out of their stone homes.

Using Sun and Moon symbols the game changes the Day to Night mode.

Going from day to night and vice versa, the gameplay changes more than just in-game lighting and symbols. Each mode has different features and prizes. During the Daytime Ogre feature, enormous Green Ogre smashes the reels with his huge club, removing all stone symbols and making room for new ones to appear and create winning combinations. People appearing on the reels only by night, bringing royal rewards with them.

Standard symbols including Wild, the Ogre, diamond, plate of jewels, gold coins and playing cards appear in both modes. In the Day mode, the Sun Blossom Wild flower appears while in the Night mode, there is the Night Bloom feature and the card symbols are replaced with the Joker Wild, King and Queen. The Sun and the Moon Scatters appear only on central reels and turn the mode of the game.

During the Sun Blossom feature, flowers grow on the nearby symbols and turn them into wilds. The Joker is actually 2x Wild and lands on reels 2, 3 and 4. Landing three Jokers into a winning combination will trigger 8x multiplier. During the Night Bloom feature, flowers glow in the dark and can expand anywhere on the reels and turn up to 3 symbols into Wilds. There is also a Double Up Game available after every spin, where players can double up their winnings by simple heads or tails game.

The innovative game play and mechanics with different symbols and features in each mode will immerse you in this fantasy kingdom and bring you a lot of excitement with its superb graphics and joyful soundtrack.