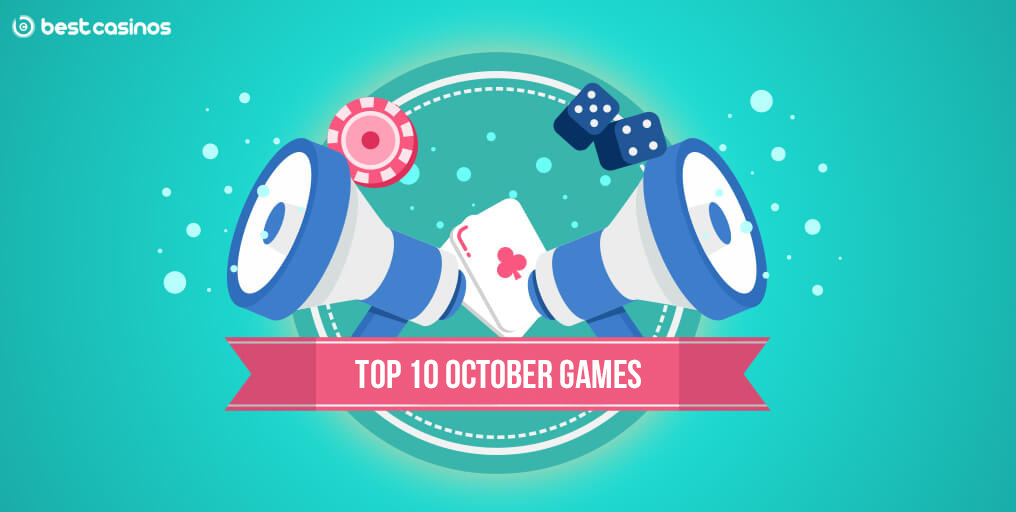 October is here, and so is autumn, yellow leaves, and sour weather. But do you know what else is in this month? New online slot games!

For this October special, we reviewed and rated several dozens of games just for you. We managed to pick out our top 10 slot releases which you can enjoy throughout October (and later on, hopefully).

Here is what we picked as our top 10 slot releases for October:

Without further ado, let’s see the upcoming slot releases which are coming before Halloween!

The sequel to one of the most famous online slot games is coming! Reactoonz 2 video slot from Play’n GO hit the casinos on the first day of the month. Play’n GO is very excited about the new release – and what can we say, so are we.

Armed with 7×7 grid, eight paylines, and sizzling 96.2 RTP, Reactoonz 2 is a breath-taking sequel to the first release. This triumphant return also brings forth an inspiring collection of game modifiers like several Wild variants, Quantumeter, and Wild Pair Explosions.

It might be raining outside, but inside the Microgaming’s world, it’s sunnier than in an African desert. Microgaming’s independent studio Slingshot enriched the provider’s portfolio with a brand-new African-themed video slot called African Legends.

Featuring a wealth of special features like Rolling Reels™, Wild Blast™, Free Spins, and a Multiplier Trail, it’s going to be the hottest slot this month. Oh, and let’s not forget that this is a progressive video slot as well!

It isn’t often that we hear of two industry leaders teaming up. But that’s precisely what happened – Big Time Gaming (BTG) and Microgaming joined forces and decided to release a game. The new slot is titled Chocolates and based on all reports, already promises to be the sweetest slot this month.

The new game brings fast-paced gameplay filled with a lot of potential. If you manage to open Free Spins, you will have a chance to play with 65,536 ways to win! The top prize that you can take home is 30,000x the stake.

Quickspin’s October slot release is Hammer of Vulcan, an amazing mythological slot that takes you down to the Mount of Etna where weapons for gods are forged. Vulcan, the Roman god that’s the equivalent to Hephaestus, is the protagonist of the new slot.

In the game, there are multiple features that can take you to the godly riches. The Hammer of Vulcan slot has 4,096 ways to win and maximum exposure of 20,000. There is also the Buy feature where you can spend coins to speed up feature activation.

Dark magic has always been attractive for slot players as companies get to explore the various facets of the theme. But Betsoft decided to bring that to a whole new level with Book of Darkness.

The new (and only) October slot release from Betsoft features several features, including the Clash for Power and Shadowform. The Shadowform is the Free Spins feature where you enjoy the full splendour of the new game.

Last month, we had a chance to chat with Yggdrasil Gaming’s Game Producer Marcin Gorka about the Valley of the Gods 2 release. He told us then that the company is planning a major innovative step in October – and that it will premiere with Hyperburst slot release!

All wins trigger Respins, and if you are lucky enough, you will reach the Hyper Respin and Giga Reels. This amazing volcano of riches is ready to erupt and yield 12,000x the stake wins. Hyperburst eruption offers 96% RTP.

On 15th of October, the world will get to meet Helloween, a slot tribute to the German power metal band of the same name. October is the month of spookiness and Halloween, yes – and we don’t doubt that this release in October is not a coincidence at all.

Free Spins, 10x Multipliers, and random Wild icons will fly around your game screen to the tune of Helloween’s greatest hits. Play’n GO went as far as to secure their live greatest hits from the Keeper of the Seven Keys Pt 1 and 2.

Near the end of the month, we will be able to meet the new Gigablox slot! Yggdrasil Gaming is about to launch Hades: Gigablox, the second slot to employ the Gigablox engine. Before Hades, we had a chance to see it working in Lucky Neko, but we have no doubts this will be a big hit as well.

The game features impeccable design, out-of-this-world graphics, and a delicious game engine that can make you rich in minutes. Don’t miss this release in your favourite casino – the god of the underworld is waiting for you.

One of the final releases in October will be Red Tiger’s Golden Tsar. Now, this is quite the refreshment for us as it’s been long since we enjoyed a Russian-themed slot. What is more, this is a slot inspired by Imperial Russia – which means royalty, palaces, and a notorious egg.

Golden Tsar slot boasts 1,380x stake wins, 30 paylines, and high volatility. If you are lucky enough, you might get to the Golden Tsar Free Spins with the help of Golden Egg Scatters. All Russian royals expand on the reels, making this an exciting release for history fans.

What kind of a list would we make if we didn’t include NetEnt? It would not be as good as it is, because NetEnt is a true master of slots of all kinds. And the company is about to show us its impressive skill with Vegas slots.

Vegas Night Life slot is a nocturnal adventure on the streets of the city that never sleeps. If you wondered how it’d done there, this is your chance to find out. Vegas Night Life boasts Instant Win feature and Free Spins. There is also a Cash Stacker feature with Mini Jackpot, Midi Jackpot and a progressive Mega Jackpot.