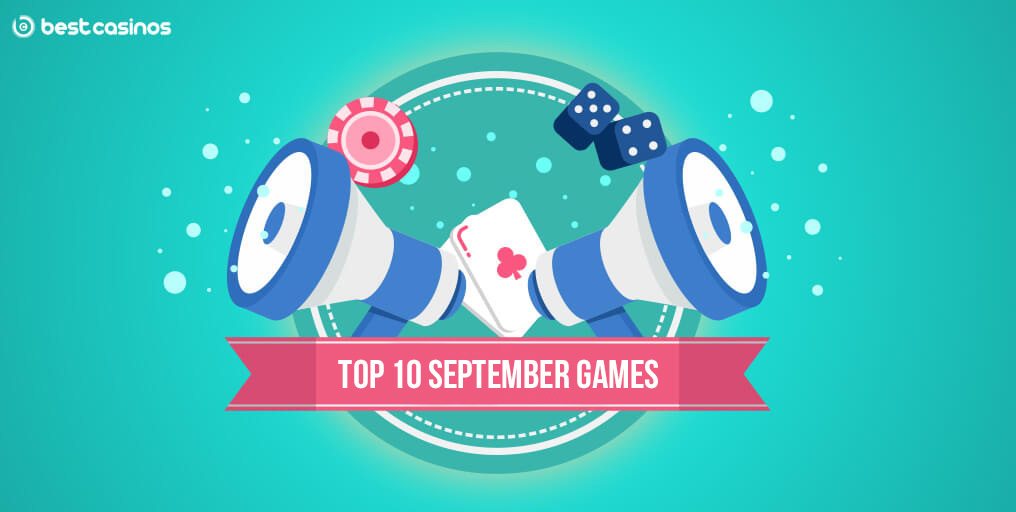 The ninth month of 2020 has rolled in. Summer’s over, and we are back to work.

If you are feeling the September blues, you probably need something to cheer up. Luckily for you, we have something that is just the thing.

Game providers have been busy during August, and besides exciting slot releases in the past month, they prepared a host of games to release.

September will be quite busy, just have a look:

Let’s take a closer look at all the exciting games that are coming out this month!

The first slot to open this exciting list is NetEnt’s Disco Danny. As you can guess from the title of the game, it’s all about disco ‘80s! Disco Danny video slot is here to shake things up and help you get your groove on. Perfect for shaking off the September blues!

Danny has some great dance moves, and he is not afraid of showing off if you dance with him. Shake it with Danny on the 3 reels with 3 rows, and you might end up taking a big prize home. Disco Danny is taking over the dancefloor with Golden Multipliers and Free Spins.

Fans of the supernatural themes are going to love the upcoming Curse of the Werewolf. The new Pragmatic Play slot game brings werewolves, full moons and ominous curses right to your game screens. You will surely enjoy the action that plays out on the 6×6 reel grid – especially with 46,656 Megaways!

Pragmatic Play inserted the Big Time Gaming Megaways™ mechanics to boost fun even more. Given the power that the game has, it’s not odd that it comes with high volatility. You can win up to 40,976x the stake. Imagine that! The game RTP is 96.50%, the average rate that modern slots sport. The game comes out tomorrow so get ready!

Halloween is just around the corner, and you know Quickspin loves Halloween. This amazing game provider has promised us a great video slot to keep us on our toes before the big holiday. Ladies and gentlemen, we hope you are ready for Ghost Glyph!

Imagine an old haunted house in the middle of nowhere. Deep below the house, in the ground, live ghosts. They are not as scary as you might think! In fact, they are here to bring you great prizes! There is a Massive Wild feature, along with some ghost urns around the reels. The game comes out on September 8.

4ThePlayer, Yggdrasil Gaming’s YGS Masters member, is releasing a new slot in September! It’s one of two new slots – the other being 6 Wild Sharks. The slot that we are excited to see in online casinos is 2 Gods Zeus vs Thor – an epic clash of powerful gods.

Watch as Thor goes toe to toe with Zeus in this battle with 4ThePlayer’s revolutionary Dual Spin™ mechanic. The mechanics let you choose the side that you want to play on – will it be Greeks or the Norse side? You also get a bonus every time the side that you are playing on wins. Look for the game in your favourite casinos on September 15!

If you are feeling hungry for great slots, Betsoft has a real treat! Dim Sum Prize is a tasty new slot that Betsoft plans to launch on September 17. Hot buns, dumplings, and more will leave you craving the best course Betsoft has offered yet.

The 5-reel video slot offers modest 10 paylines and sweet 377.6x the stake wins. Don’t worry though – the slot offers a fair choice of features on the side. They will spice up your meal that you will ask for an extra scoop! Don’t miss this fantastic video slot in your casino – you won’t regret it!

When Play’n GO decides to create a game, you know it’s going to be a trailblazer. But when the innovative provider announces a trilogy – the anticipation is even higher! The upcoming trilogy includes three Asian-themed video slots: Celebration of Wealth, Temple of Wealth, and Beast of Wealth.

All three games are arriving at your favourite online casinos on September 17. Luck and prosperity come hand in hand in these exciting Asian slot releases. Chinese treasures can be yours if you dare try out the amazing pack that Play’n GO prepared. All three include Free Spins, as well as a progressive jackpot feature and a GOLD REEL feature.

The second slot release from NetEnt this month offers an entirely different experience than Disco Danny. Forget dancing in the disco; it’s time to sail the seas in search of treasures! Yes, you guessed it right – Rage of the Seas is a pirate adventure through and through.

It brings forth 5 fantastic action-filled reels where you can collect a range of impressive game features. There are Spreading Wilds, Stacked Wilds, a Major Reel Upgrade, as well as a Minor Reel Upgrade. Next up, you can enjoy a 2x Multiplier, Free Spins – and Extra Free Spins! The game also lets you expand the winning ways from standard 1,024 up to 5,488.

Fortunium Gold is back, and it’s even bigger and better than before. Microgaming, along with Stormcraft Studios, decided to refurbish the popular Steampunk-themed video slot with new features. And what better feature than a Mega Moolah progressive jackpot network?

Fortunately for you, Fortunium Gold Mega Moolah progressive slot is here to boost the Mega Moolah network even more. It will join the ranks of other popular releases like Absolootly Mad and Atlantean Treasures Mega Moolah. You can enjoy 40 paylines, a Win Booster™, a progressive jackpot, and mystery symbols. Plus, the 5-reel slot also comes with medium volatility and 92.67% RTP.

Get ready for another Egyptian adventure, because Yggdrasil Gaming is cooking up a sequel to Valley of the Gods. The upcoming Valley of the Gods 2 goes back to the desert valley to uncover the ancient mysteries. Long forgotten treasures wait for you in the great 6-reel release.

Remove the scarab blocks to unlock boosters for the reels. Extra Lives, Multipliers, or Wild Reels? You can have it all. The game starts with 240 winning ways, but they can quickly expand up to 20,160. The Valley of the Gods 2 slot has a max payout of 5, 481x the stake.

And finally, we have reached the end of this sizzling list. And we have the perfect video slot release to finish the party – Red Tiger Lucky Fridays slot game! The provider dedicated it to all players who love Fridays after work. So, grab your favourite cocktail and spin the reels: Friday fun awaits!

With 30 paylines, 5 reels, and 4 rows, Lucky Fridays will be a delightful treat for slot players. The party never ends with Red Tiger – and Lucky Fridays slot with three delectable game features proves it. This highly volatile game comes out on September 24 and can give you up to 3,500x the stake wins. Let’s party on!