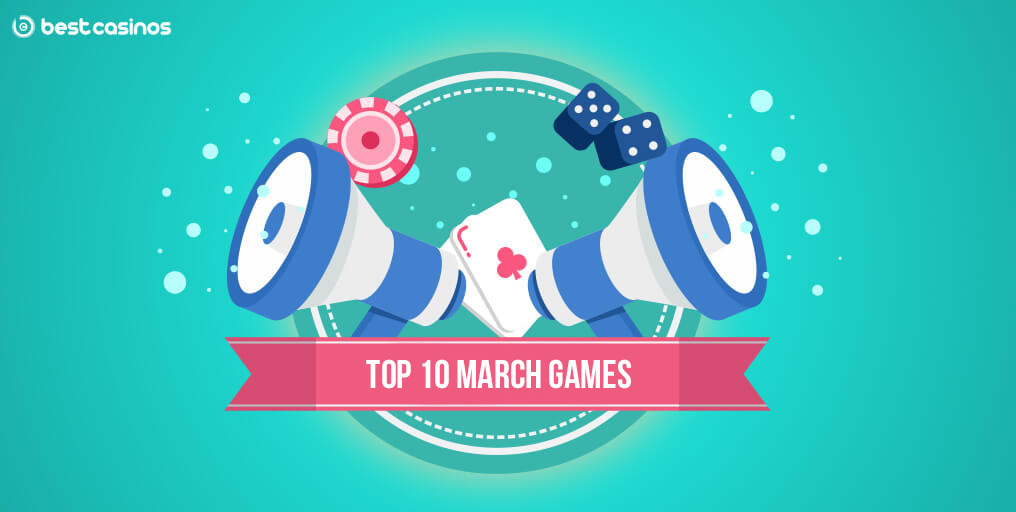 Oh, it seems that we only blinked, and the first two months of 2020 flew by. We are now bravely stepping into March, so we should prepare ourselves for the arrival of spring.

For that occasion, we prepared a top selection of ten video slots that are arriving in March. Get ready for a whirlwind of Free Spins, bonus rounds, and massive payouts!

Before we get to explaining each title that we are looking forward to, let’s have a glance at our list:

Here are the details about each upcoming March release!

Triple Edge Studios and Microgaming have joined forces to create a mighty slot that will send you back to the ‘80s in a flash. If you think that the glittery, disco era has passed, think again.

Microgaming has brought it back with its premium independent studio once again! It is a perfect springtime slot because it features a lively, colourful theme with a superb soundtrack. Attack on Retro has a max payout of 5,000x your stake so that it will be more than rewarding. Additionally, three types of Wilds and Hyperspins give you a shot to increase the game’s RTP. This amazing upcoming release is the first to appear in casinos, arriving on March the 3rd.

Now here’s a theme that we haven’t seen for a long time! Yggdrasil Gaming is taking you to the royal courts to meet the sovereigns. The Royal Family video slot gives off a nice medieval vibe, which fans will undoubtedly love.

If you are excited about this release as we are, you surely want to know all the details. Unfortunately, as the game is yet to appear in online casinos, here is what we know for now. It has five reels, four rows, and 25 fixed paylines. As you can expect with Yggdrasil releases, it sports beautiful graphics, but the potency under the hood won’t disappoint you. Unique Spins boost free Spins with regular Wilds with a selection of 12 boosting elements. The game hits casinos on March the 4th. Save the date!

Your favourite leprechaun-themed slot is receiving a makeover! Red Tiger has decided to enhance this popular title by adding the Power Lines mechanic. This added element in the game expands the reel grid and winning ways.

However, it is interesting to note that Red Tiger kept the medium variance from the original title. You have a decent payout potential, as well as an abundance of special features. What else can we ask for? Rainbow Jackpots Power Lines arrive on March the 10th.

From the vast fields of Rainbow Jackpots Power Lines, we transfer to the jungle with Quickspin. The highly anticipated Panther’s Reign slot is a vibrant adventure in the heart of Amazon. For this adventure, Quickspin equipped you with five reels, four rows, and 50 winning ways.

The jungle might be a dangerous place, especially if you take into consideration the wild animals that lurk in the shadows. However, with Quickspin, there is no reason to worry. Panther’s Reign brings a plethora of features and animations that will entertain you for hours. There is no doubt you will enjoy the upbeat gameplay sprinkled with all kinds of wild features. Quickspin’s game will go live on March the 10th.

Play’n GO is finally expanding its heavy metal slot series. After the successful Sabaton, House of Doom, and Demon, we are getting a Testament slot! The upcoming release is a homage to the legendary band that will surely delight the players.

In the game, players will be able to participate in fast gameplay splashed with action-packed features. Furthermore, there are five reels and 243 ways to win. Another critical aspect of the game is the design. Visuals are already looking astonishing, and the soundtrack will feature the band’s hits. Online casinos will welcome Testament on March the 12th!

The legend of Robin Hood sometimes surpasses Richard the Lionheart in terms of popularity. The outlaw that looted the rich to give to the poor is referenced in numerous movies and TV shows. And now, Play’n GO dedicated a slot to this brave warrior!

Riches of Robin is a 5-reel adventure playable on 20 paylines. Of course, you can access the game via any device for only €0.10 per spin. Riches of Robin features the Free Spins where you can win unlimited rounds with 10x Multiplier. We get to meet the game on March the 19th in all Play’n GO online casinos.

The first release of the month for one of the best game providers in the industry is WIlderland. A magical fantasy filled with ethereal characters looks like it came from a Lord of the Rings movie. The beauty of the game lies in the graphic perfection that Wilderland is.

However, there is more to WIlderland than meets the eye. The first feature that you will notice is the Activation Zone that expands on the middle reel during Free Spins. But, NetEnt is well-versed in online slots, so it added a couple of extra features as well. Most notably, there are five different Wild versions that you can encounter on the grid! The game hits the casinos on March the 24th.

The game’s RTP is unusually lower than ordinary. Nevertheless, you have a decent max payout potential of 2,270x your stake. The three main features in the game are Monster Cloners, Flaming Sphere, and Monster Fury. With these features, you will be able to clone the reels, duplicate symbols, and open the fantastic Free Spins mode. Betsoft’s game arrives at online gaming sites on March the 26th.

As always, we could not forget to add at least one Egyptian-themed slot. The March list has only one Egyptian slot, and it belongs to Red Tiger. Vault of Anubis is, just like Monster Pop above, a cluster pay slot. It is the first cluster pay for Red Tiger with this specific theme. It comes in the shape of a 7×6 grid that quickly fills with colourful symbols and feature triggers.

The Vault of Anubis slot sports beautiful graphics that stand out from the rest in terms of originality. Let’s be honest – the theme is so popular that most providers have dozens of titles with this theme. That means that some titles will inevitably share a couple of characteristics and design elements. However, Red Tiger’s upcoming game is different. Amazing visuals, great power, and high potential – that is the Vault of Anubis for you. Look for the game in your favourite online casino on March the 26th!

The final game on our list is the second title that NetEnt plans to release in March. The Asian-themed game that we will meet on the last day of March reminds us of NetEnt’s old Jack Hammer slot. It has cartoon graphics and a refreshing soundtrack that rounds off the action-packed atmosphere.

NetEnt also added five reels and 25 fixed paylines for your entertainment. However, the most exciting part is that Long Pao features a generous 96.96% RTP and medium volatility. If you like to experience action but not risk, Long Pao is the game to try.