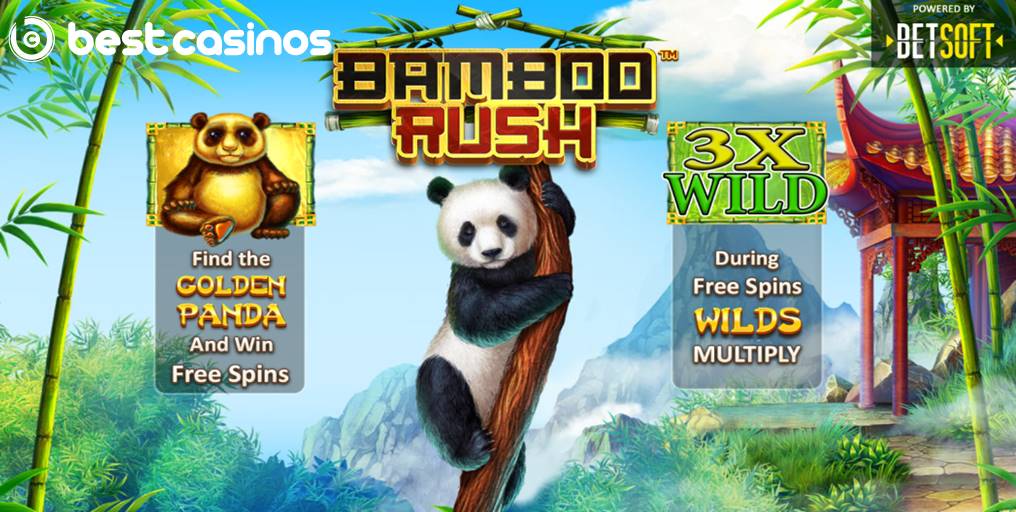 Superb manufacturer of online casino games Betsoft has just released its latest video slot. The game named Bamboo Rush comes equipped with 5 bombastic reels, 40 paylines. Moreover, there is a bunch of multipliers that are designed to jazz up your playtime.

The game is set inside a secret garden where hit opportunities are in bloom. When it comes to symbols, you will have the standard playing cards set (10 to A) that has a lower value. On the other hand, six high-value symbols typically represent the Chinese culture: lotus flower, a temple, a couple of coins, yin & yang, the game logo, and a giant panda. The panda is the highest paying symbol. Other special icons include a Wild and a Multiplier represented by the same symbol, and the Golden Panda which acts as the Scatter you will need to get to the Free Spins.

The set of features is something you will usually find in Betsoft titles. You can unlock the main feature – the Free Spins, by finding at least three Golden Pandas on the reels, in which case you get 8 extra rounds. If you are lucky enough to grab 4 or 5 Scatters, you are looking at 12 or 20 free rounds, respectively. During extra rounds, the wild awards multipliers of 2x or 3x. Then you collect up to 27x multiplier per the winning payline. The wilds appear only on reels 2, 3, and 4.

Considering the multipliers and giant pandas, you have numerous options for augmenting your cash flow.  The game is new, so the lack of variance information is not surprising. The RTP is 96.9%. Bamboo Rush went live on September 9, and it immediately appeared in all virtual casinos that collaborate with Betsoft.