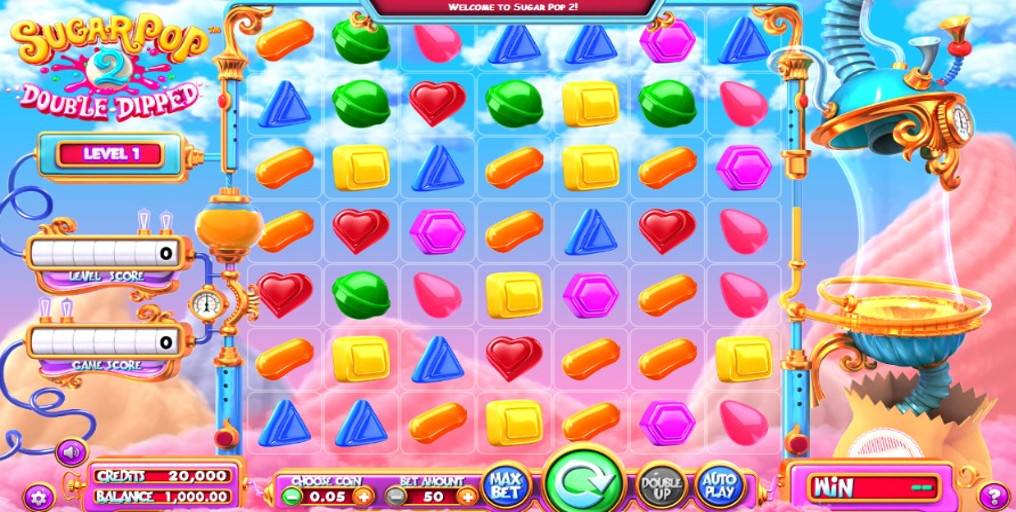 Ingenious and innovative creator of top-notch slot titles – Betsoft – is inviting you to indulge in the reinvention of Sugar Pop, which stands as one the company’s most popular games to date.

Candies were a huge hit not too long ago and – latching on the unweathering popularity of its original title – Betsoft has decided to bring this sweet and delightful subject back to the forefront with enticing visuals and dreamland setting filled with chocolate surprises.

Similarities between the original Sugar Pop title and its Double Dipped sequel are striking but there are differences that draw a clearly visible line between the two games especially when it comes to game functionality and gameplay.

The game’s special candies no longer just appear on the grid but rather float onto it in a giant chocolate surprise egg. Caramel chew is still there but now removes all candies of a specific colour from the board to help you win bigger and better.

Sugar Pop was not your regular slot game and so isn’t the Double Dip!

Those who expect to see regular reels and paylines are in for a surprise with Betsoft’s innovative 7×7 cluster play playing board which increases the action thanks to its fast and vibrant system wrapped up in bright colours and cheerful tone.

Sugar Pop 2: Double Dipped slot comes with a Morphin Golden Wild candy which shifts and changes shape to match any candy near it for a special effect and a boost to your winning chances.

The Jelly Bean Cannon is also there to fire Jelly Beans into the air, taking out any candies they land on. Additionally, we have a Sweet Hammer which slams the board to take all candies that stand in its way.

And the game is sure to have a surprise in store for all the Free Spin lovers who will be given two extra spins on the house.

Arguably the most exciting feature in this fantastic game is the level up feature which allows players to unlock new candy every few levels. New candies will be added to the player’s special candy list which then brings a host of rewards.

The best thing about it all is that there is no level cap in the sequel!