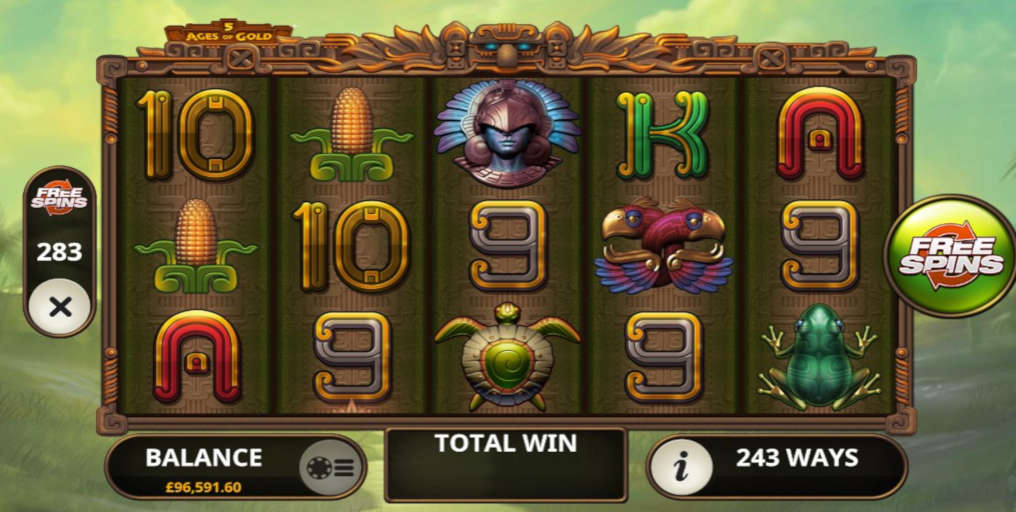 Discover the Ancient Treasures with Playtech’s 5 Ages of Gold

Playtech is definitely on a roll with a new online slot, coming our way, so soon after they have released their hit game Tiger Turtle Dragon Phoenix!

Their newest release 5 Ages of Gold is coming directly from their Geco studio and it will entertain you across all devices for £0.30 to £300 a spin.

What Do We Have Here?

Delve into this deity packed, 5-reel slot with 243 ways to win and spin away for a chance to get wild multipliers up to 30x.

The slot is pretty simple visually speaking, however, the frogs, turtles, parrots and Mayan headpieces really bring that ancient-like atmosphere to the slot with their elaborate designs.

The totem hem is the Wid and when it appears on reels 2, 3, and 4. When it appears on the middle reel it can trigger the Wild Bonus feature. The feature will reward you with a cash bonus of up to 50x your stake or access to Free Games feature.

You can also trigger the Free Games feature with the help of the sundial scatter. By landing 3 or more starting from the reel 1 you get to chose from 5 options, each of them offering a different number of free spins and different wild multiplier values.

Pretty enticing so far, isn’t it?

Well, let us just mention that in the Free Games feature there is also a retrigger available with whatever option you choose, giving you even bigger payouts.

When we translate that into math language, it means that you have a chance to win 1,000x your stake from each spin or free spin and if you add in a 30x multiplier it will result in 30,000x stake payouts!