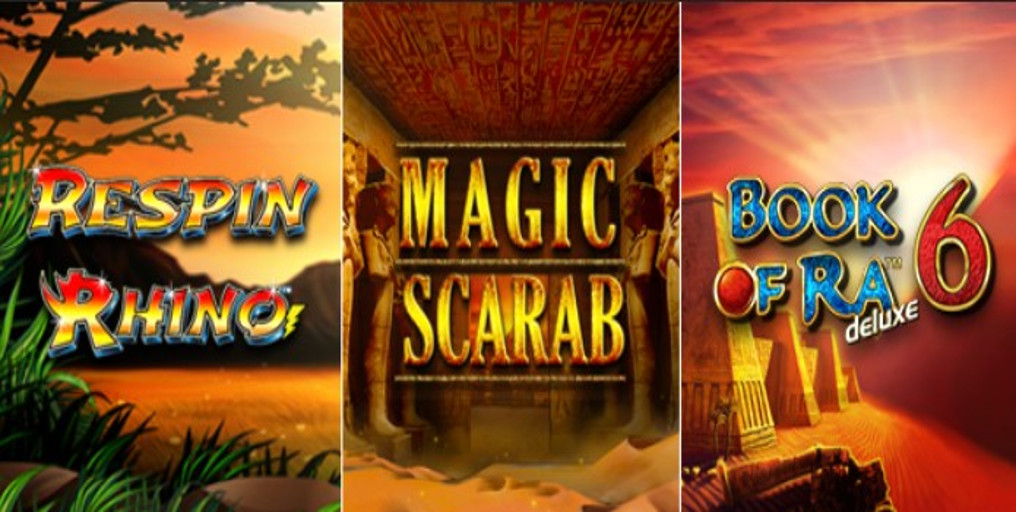 Have full HD 360 degree look into the world of iGaming with Game360 at VideoSlots!

A magnificent triad of incredible video slots has just been added to the assortment. The Holy Trinity includes Magic Scarab by Game360, Respin Rhino by Lightning Box and Book of Ra 6 by Greentube.

Magic Scarab by Game360 is a classic five reels by three rows slot that features 25 arbitrary winning paylines, all of which will earn you wins lest at least three symbols that match land on the reels from left to right. The minimal wager is € 0.25; however, you can of course go higher than that. With an RTP of 95.2%, the game’s maximal bet amount totals € 125.

As far as Scatter symbols go, their placement is not restricted and they could land anywhere on the reels, and that will activate the Free Spins mode. In the Free Spins, anything you win can be doubled up, so you had better try your luck!

The exotic African slot by Lightning Box inspired by jungles and the tough wild animal is a video slot of 40 paylines.

It is swarmed with bonuses and wild symbols, so you are likely to be hooked immediately! The bonus in question is the Respin Bonus, specially created for this slot only. The Rhino Respin Feature grants you three respins. The Stacked Gold Symbols will be replaced, rendered by the feature, on the reels 1 and 5, by a Stacked Golden Rhino Symbol, while both Rhino reels will stay sticky until the end of the Bonus Round.

There are also Expanding Wilds, which will increase your chances of winning more. The minimum you can wager is € 0.4, but you can indulge yourself in up to € 200. The slot’s RTP totals an incredible 95.62%.

The Egyptian game created by Greentube is 6 reel, 3 row game with 10 optional paylines.

The minimal amount to wager is € 0.2, while the maximum is capped at over hundred. The RTP is 95.03%, a great score, much like the other two games. There is a special expanding symbol and it is selected randomly at the beginning of the Free Spins. Throughout the round special symbols expand to cover three positions on the reel to earn you a payout on the lines you have played on.

A fantastic feature is the Extra Bet, which activates the sixth reel to bring you massive wins!