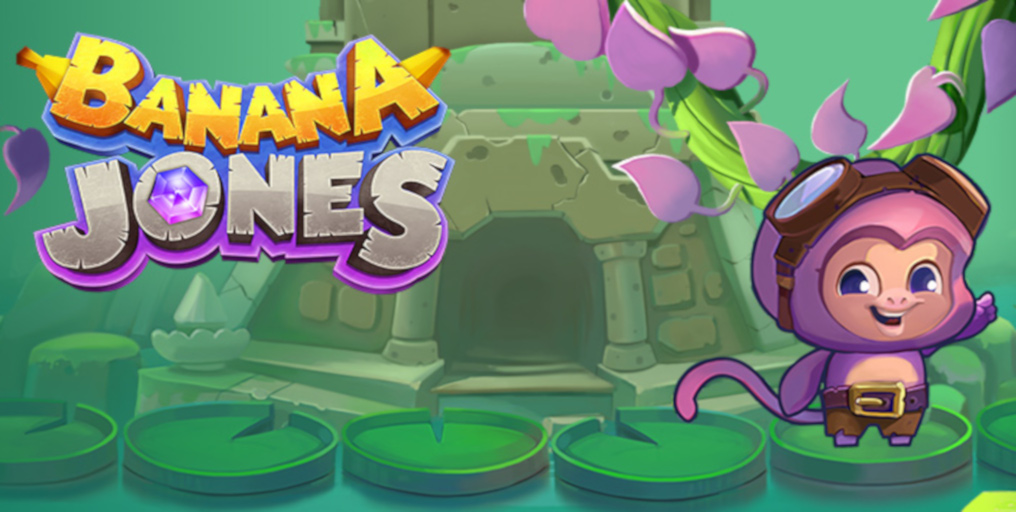 Being a veteran in the online casino industry, well-known for its high-quality slots, Real Time Gaming has really brought something refreshing to the table with their latest release Banana Jones.

Banana Jones is a fun mashup of Snakes and Ladders and Indiana Jones.

You do not have reels or rows to spin but a dice to roll. And the whole layout is more similar to a board game. Your main mission is to navigate his way through the Crystal Banana while battling Leopold the Leopard and his hurdling horde of snakes.

The game kicks off with a movie clip showing how Banana Jones crashed his plane deep inside a jungle as he goes in search of the sacred Crystal Banana and gets it before the evil Leopold the Leopard and his army of snakes. The plane crashed and led him right to the temple where the Crystal Banana was.

Each time you bet, you get 5 rolls of the dice.

Each dice roll results in a number between 2 and 12. If you land on a Snake’s head, you slide down its tail further away from the temple. If you land on the base of a Vine will get you closer to the final destination.

There are nine diamonds scattered across the board and you collect those by landing on a lily pad that has them. There are also two Extra Roll symbols on the way which reward you with an extra roll for free if you land on them. The one is placed at the beginning of a game and the other somewhere in the midway.

Landing on one of the four Treasure Wheel Head symbols will trigger the Treasure Wheel Bonus feature when the symbol expands to a statue holding a wheel with a range of multipliers ranging from 0,1 to 50x. Spinning the wheel and multiplying that number with your original bet is your win amount.

Reaching the giant pyramid temple will trigger the Crystal Banana Quest Feature where you can choose one of the several treasure chests with different fruits inside that are added to your counter. The first counter you complete, rewards you the prize displayed and the highest payout could be up to 62,500 coins.

This unique, innovative layout will not only bring you back into childhood when you enjoyed playing board games but also give you an exciting gaming experience with a chance for really big payout.