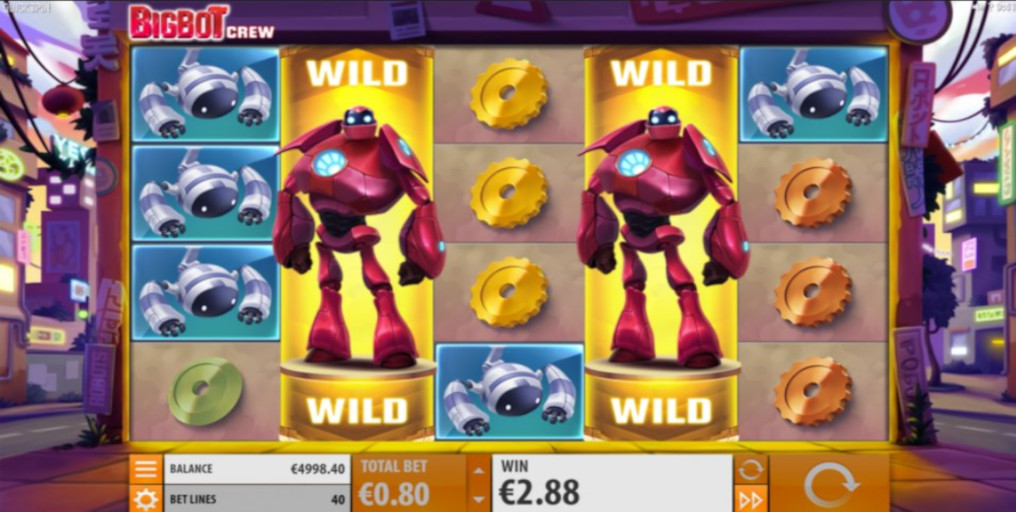 With September knocking on summer’s door, the good people from Quickspin are preparing to treat the players with an exciting new video slot called Big Bot Crew.

Universally known as a gaming giant with a particular penchant in creating fast-paced and high-impact games, Quickspin promises to take you on an epic journey into a parallel universe where you will join a gang of tech-loving teens who are building robots of tomorrow on the outskirts of an exotic metropolis.

The technology-oriented screenplay comes embedded inside a fastmoving, dynamic gameplay filled with high-quality graphics and plenty of action with symbols and features.

Symbols on the reels are all you’d expect from a futuristic, robot-loving game.

A group of techy teens are joined by robots of different sorts as high-valued symbols whereas you also have low denomination gearwheels completing the offering.

Initiated by special symbols – Wilds and Scatters – bonus features represent a cherry on top of any slot cake.

Such is the case with Big Bot Crew as well where Bigbot Wild will trigger re-spins, whereas the Bonus Scatter is responsible for the launch of Free Spins. Players can hope to land eight Free Spins for three bonus scatters anywhere in sight, while one additional Free Spin will also be thrown your way for every Bigbot Wild that would land fully on the reels.

These Bigbot Wilds have a role to play in the base game as well, where they will trigger the Bigbot re-spin feature. Depending on the number of Bigbot Wilds shown on the reels, the players can hope to get a corresponding number of re-spins.

If Bigbot appears fully stacked on two or more reels in the base game there is a chance for any partially visible Bigbot Wild will be nudged to cover a full reel in what is called a Mystery Nudge feature.

Quickspin has announced that Big Bot Crew is set to be released on 11 September 2018 and we honestly can’t wait to have a spin.