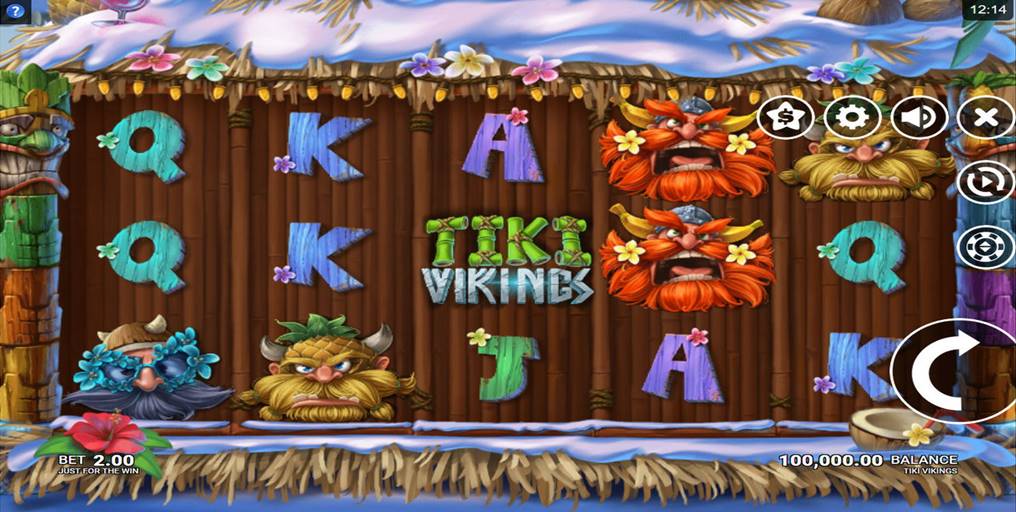 Most people would say Vikings and cocktails do not go together – under any circumstance.

But, apparently, they would be wrong! The innovative provider JustForTheWin has just released exclusively for Microgamingits badass slot titled Tiki Vikings and it is every bit as wacky as you think it is.

It’s Getting Humid Out Here

The bizarre combination of Vikings and tropical islands is a colourful mesh of themes, symbols, and features. But before we dive into the features you can encounter while playing, let’s first talk about technicalities. The 5×3 slot is equipped with 20 paylines, and the RTP rate is said to be the average 96.01%. When it comes to volatility, it must be the combo of cocktails and arms that makes this game a solid medium-volatility slot.

You are simply going to love the design of the game. The representation of Vikings who are supposed to be scary like in Vikings Go Berzerk in this game is the complete opposite. The symbols include a couple of styled block letters and three different Viking warriors that are – and we are not kidding – sporting some amazing accessories such as flowers in their beards. If the letters form a winning combination, you will be paid out instantly, but if the Vikings make a hit appearance on the reels, the special Symbol Lock Re-Spin begins. Basically, this means that you will get and additional Re-spin as long as new special symbols land on the reels and create a winning sequence. As soon as they land, they are locked in place with ice, and they stay there until the end of the Re-Spins.

The other special feature that Tiki Vikings came equipped with is Symbol Upgrade which activates when the Symbol meter is full. Filling the meter is done during Symbol Lock Re-Spins. Once you fill the entire meter, locked symbols upgrade to the next, more rewarding symbol.

As of today, you can find this amazing slot in all top casinos that collaborate with Microgaming!