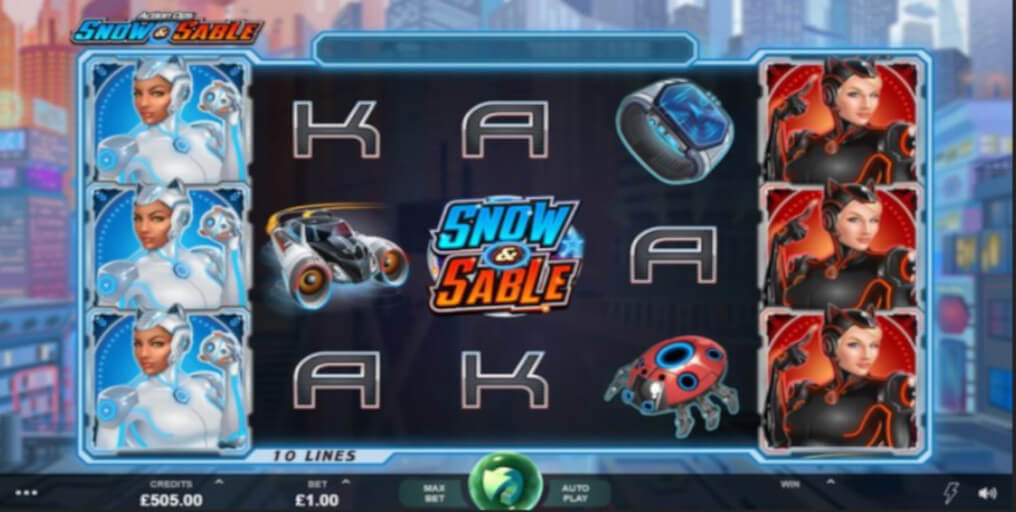 The fresh action-packed release was developed Triple Edge Studios, the ones responsible for the ground-breaking fairytale masterpiece slot The Dark Red.

Those eagle-eyed of you might have noticed the game’s title lurking among our lines in the past month.

The Future Is Coming!

Action Ops: Snow & Sable is a video slot inspired by the geeky world of science fiction. All action is set in a futuristic metropolis named Aurora and you are in the midst of it all; players need to join the crime-fighting duo in their quest.

May we remind you, futuristic aspects are not alien to Microgaming; just think Fortunium developed by the Stormcraft Studios.

The new neon game is swarmed with stacked wilds, mixed wild pays and extra spins. The two protagonists – attractive robot-like ladies of the future – are in charge of all the action taking place. Throughout the gameplay, they cater for pays as both individual symbols and together. If four out of five of the symbols land on the reels, the scatter will provide 10, 15 or 20 extra spins.

When accessing the extra spins round, Snow & Sable are prevailing.

The reels number one and five will go wild with every single extra spin! A character will randomly be assigned to either reel, and your goal is to make the same character to appear on their reel. This will get you massive wins! As if the existing extra spins were not enough, during this section you can activate even more of them! Two to three scatters throughout the round will bring you 5 or 10 more extra spins. The game will let you win up to 1,000x your initial bet.

David Reynolds, Microgaming’s Game Publisher, was proud to launch yet another slot developed by the “hot on the heels” Triple Edge Studios. He said on the game that it is a high volatility one “with a potentially rewarding base game, complemented by a free spin experience that has a high theoretical average return and the ability to retrigger.