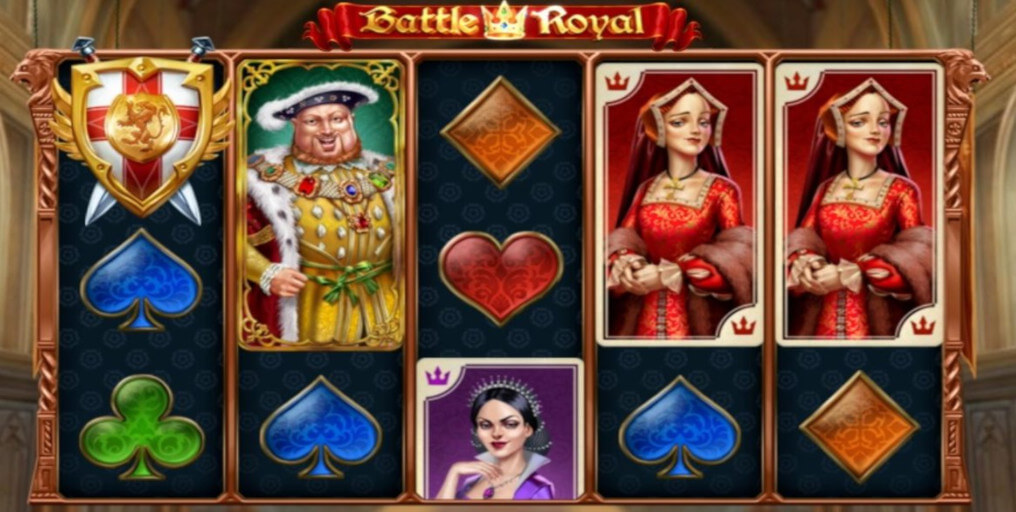 Based on the notorious Henry VIII and his six wives, Battle Royal slot is Play’n GO’s latest title near the finish line of 2018.

In the light of monarch’s evil deeds in a rather comic and a bit morbid way, you’ll get to benefit from his wives’ beheadings.

Get ready to join this royal adventure inside a Tudor castle and you might land up to 500,000x line bet.

Travel back in the history to the court of the most eccentric monarchs in the English history with this 5-reel 20-payline slot fromPlay’n GO.

Visually impressive, Battle Royal slot is available on all devices for as little as $0.20 to $100 a spin. The King himself is the Wild and can substitute for all regular symbols and will bring you 30x your stake for five on a line. During the base game of Battle Royal, you can randomly trigger the Royal Flush features on any spin and then all low-value symbols on the reels will transform into the same randomly chosen symbol to help you form winning combinations.

Landing Scatters on reels 1 and 3 simultaneously will trigger either Free Spins or the Long Live the King feature and this is where all the fun starts!

In the Free Spins or in other words, Heads Will Roll feature, players pick one of the six wives they think would survive the guillotine. On every spin guillotine will fall down on one of the reels. If a full-stacked wife or her upper body is on the reel with the guillotine, it will be beheaded and become a Wild for the rest of the feature.

Free Spins continue until only one wife symbol remains. If the sixth remaining wife is the one you chose in the beginning, you get a cash prize. Finally, you must choose which reel you would like to place the remaining wife before the guillotine falls from one of the reels.

If she survives, the feature ends and if she dies, you trigger the Long Live the King feature where you must help Henry to collect loot and escape the haunted dungeon. In each chest in this feature, one of the wives’ ghosts is lurking Henry to punish him for his crimes. If you pick a chest with a key, the King will break free and you will win a mystery multiplier that will be applied to the total win from free spins and bonus features.

Make no plans for this Christmas season, since you’ll have your hands full with this amazing and fun slot game with huge winning potential. And who wouldn’t want six gorgeous women fighting for his affection and bringing him some hefty prizes along the way?