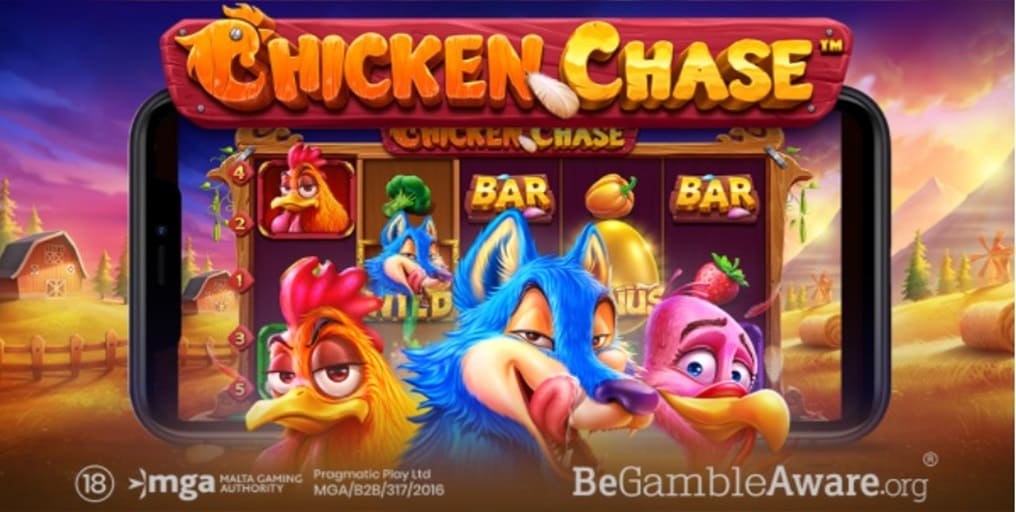 A leading content provider to the iGaming industry, Pragmatic Play, releases a new slot, Chicken Chase. Players will step into the henhouse in the latest farmyard-inspired release. Save the poor chickens from the big bad wolf in the Pragmatic Play’s newest release.

Chicken Chase plays out on a 5×3 game panel with 10 fixed paylines. Aside from the farm-inspired icons, the Chicken Chase slot also features a wild that will substitute all other symbols to create matching combinations.

Each spin is split into two phases. The initial spin follows a traditional format. Once it is done, players can choose to hold certain reels, with the game providing suggestions on which reels are best to hold. They will remain locked for the next spin, while the other reels spin.

When players land three Golden Bonus Eggs, they will trigger the bonus feature. Here players can choose between four different chickens, each chicken providing a different egg prize. Prizes are increased, based on the number of Bonus Eggs players initially landed to unlock the bonus round.

The Chicken Chase launch follows recent hits, such as Drill That Gold, Barn Festival, and Tic Tac Take. All these titles now reside amongst a collection of over 200 HTML5 titles in Pragmatic Play’s award-winning games portfolio.

Pragmatic Play’s Yossi Barzely says: “Being able to deliver a lower volatility release like Chicken Chase is a testament to our diverse portfolio.”

Chicken Chase enables players to have complete control over each spin and which reels to hold gives them true control of the game. Something that is a key requirement for the retention of modern gamers.

Pragmatic Play currently produces up to six new slot titles a month. The developer also provides Live Casino and Bingo games as part of its multi-product portfolio, available through one single API.