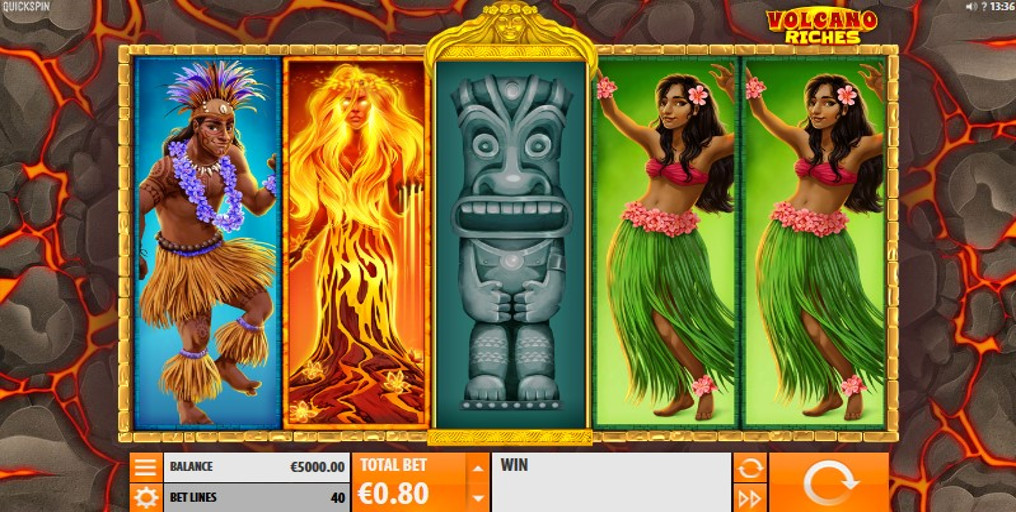 Swedish slots savant Quickspin is set to release a newborn among the slots with this blazing game. Quickspin is sending you on an unforgettable adventure to a combustible island and challenging you to fight the flames.

This explosive 5×3 slot is set in the Pacific’s legendary Ring of Fire, a large-scale round area notorious for the numerous volcanic eruptions that constantly befall this place.

The slot has been designed to pay a fitting tribute to the local culture, furnishing the atmosphere with the well known Polynesian grass skirts that most characters in the game wear, followed by hollowed-out canoes on the reels, after which carved monolithic human figures ensue, to give you an authentic feel of the civilisation of the region.

As far as the gameplay goes, it is focused around making volcanic Wild Symbols explode as soon as they land on the reels, which as a result generates up to even five additional symbols in the positions adjoining the said reel.

After this build-up, the grid is evaluated.

If the short fused Volcano Wild Feature lands in the right position, it naturally erupts, which brings about the generation of between 2 and 5 extra Wild symbols.

After they all settle, the grid is gauged. The said reaction may also generate the appearance of bonus Volcano Wilds, which will also explode. The erupting symbols can substitute for any symbol nearby on the grid.

During a Base Game only one Volcano Wild symbol can land, and it necessarily erupts, with a chance of retriggering more Volcano Wilds. However, it is not feasible to render both the Volcano Wild Feature and Free Spins in the same Base Game spin. Not more than 2 Volcano Wilds can land during a Free Spin, and they will erupt, too.

Volcano Riches slot game is set to be released on 14th March 2018, so you will not need to hold your fire for too long.