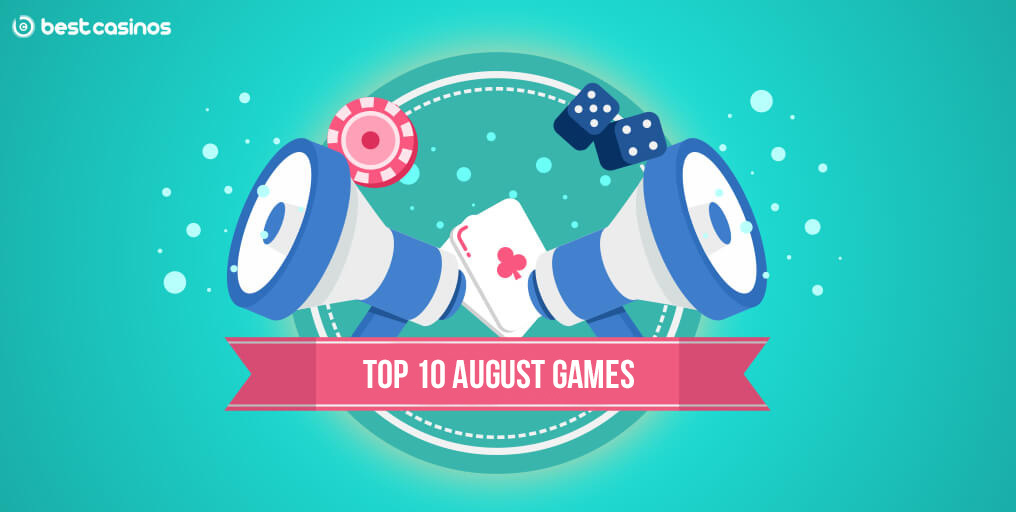 Thanks to the pandemic, many of us won’t have a chance to go on a much-deserved holiday. Hot summer days stretch before us with no way to relax and unwind next to a beach.

But we have a solution! Like always, BestCasinos has compiled a list of the best new video slots to play this month. July releases kept us occupied last month, but it’s time for a new bundle of games. August releases are aplenty, but we had to narrow it down to 10 best slots to play in the next few weeks.

Here is what we highlighted for you:

Let’s roll the August reels and hope for hot prizes.

The first slot on our list is a video slot that comes from Yggdrasil Gaming. Yggdrasil is, as you know, not a stranger to mythological themes. Therefore, its new slot takes on the story of Medusa, a monster from Greek legends that petrified men who look at her.

In Yggdrasil Gaming’s slot Medusa: Fortune & Glory, however, your task is to defeat her. However, worry not – Yggdrasil made sure you will love seeing Medusa often. Whenever she appears on the reels, she can add extra Wilds to the grid which boost your winning potential. The game is already out in all online Yggdrasil Gaming casinos.

After a brief visit to Greek antiquity, we move onto the Red Tiger’s show of a slot. We are not kidding – Cirque de la Fortune is a circus where you can enjoy a good show. As we haven’t had a circus-themed video slot in a very long time, we were delighted to see Red Tiger bring it back to our game screens.

Just like a real circus, Red Tiger’s Cirque de la Fortune is a magnificent show full of unique features and great rewards. You can win up to 3,333x the stake if you are lucky enough. Keep an eye on the Win Wheel that appears above the reels because it’s where the magic happens.

Artemis Vs Medusa by Quickspin

Quickspin is also a fan of Greek mythology. Medusa, the creature from Yggdrasil’s new slot, is also the leading figure in Quickspin’s August release. Artemis Vs Medusa is an epic action slot where you help Artemis defeat the nasty Medusa.

In the base game, you can collect the bounty from unique coins that sometimes come with medium-value symbols. If you receive enough bows, you will directly go into a fight with Medusa. The best thing about this is that the Free Spins are unlimited. You can enjoy extra rounds that last until the end of the battle. The maximum payout here is 5,288x the stake.

If there is something Play’n GO excels at, it’s music band themed slots. After a string of its highly successful slot tributes to legendary bands, Play’n GO decided to release another. And this time, we are playing with the English heavy metal band Saxon.

Play’n GO never disappoints. Saxon is a legendary band that rocked the scene during the ‘70s and ‘80s. And now all of their famous hits are available in Play’n GO’s eponymous slot. Win Multipliers, Wilds that stretch over entire reels and Free Spins are some of the main attractions here. If you are a fan of the band, don’t miss this slot. It hits the casinos on August 13.

In August, Red Tiger plans to release several exciting video slots. Hence, it was only fitting to add another one of its releases to this list. However, the second slot differs from the circus-themed one significantly. Five Families is a video slot that revolves around mobsters, as the title represents the five mob families in New York.

The game takes you to a casino where you play to get into the VIP Room. To get there, you have to prove your worth. With each consecutive win, you load the gun. Five bullets in the chamber and you get to the VIP Room where 5x Multipliers boost your winnings. It’s an offer you cannot refuse.

The Hive, Betsoft’s first hexagonal slot, created a boom in the markets when it first appeared. The sweet slot revolved around bees and honey, and players loved it so much that Betsoft decided to continue the trend. The new release is called the Mystic Hive. Can you guess what the game is about?

Mystic Hive is also a hexagonal slot, but there are no bees. Instead, you play with fireflies! They dazzle around the grid while you collect the mystic nectar. Sometimes they even activate Multipliers. Keep an eye on the Nectar Meter, because you can easily hit the Free Spins mode. This 30-line Betsoft slot comes out on August 20.

Miami heat and neon lights can remind us only of one thing: NetEnt’s Hotline hit slot. The popular video slot became a hit when it first appeared, and NetEnt waited patiently to launch a sequel. And it’s finally here. Hotline 2 is scheduled to appear in all NetEnt online casinos on August 24. Join detectives Riviera and Quinn on the pink nights in Miami.

Among the best game features, you can enjoy Expanding Wild symbols, the Hotline feature, and Free Spins with expanding reels. In the base game, you will have a chance to chase wins with 243 winning ways. That number changes when you hit the Free Spins mode. In Free Spins, there could be up to 1,944 ways to win.

When Foxium and Microgaming team up for a slot release, you know it’s bound to be good. The two gaming companies worked together in the past few months on creating a new video slot. The result of their joint adventure is 3 Tiny Gods, an Egyptian-themed cartoonish slot with five reels.

A romp in the desert is a perfect setting for an August slot release. The 3 Tiny Gods slot features three minuscule versions of famous Egyptian gods. And you thought mythology is not a popular theme in slots! Among the features, 3 Tiny Gods have The Gift of Bastet, Mystery of Horus, and Free Spins.

Heavy metal band tributes and pirates? Why not. Play’n GO is used to versatility in its slot releases, even in the same month. Near the end of August, we will have a chance to meet the sequel to Jolly Roger.

Jolly Roger 2 tells the story of Captain Red Rogers, who is exploring the vast seas in search of riches. He will surely find them, especially if you trigger Multipliers and four other special features. Jolly Roger 2 comes with two different Free Spins modes, one of which entails an epic sea battle. Sink the enemy ships and loot for riches in Jolly Roger 2 starting August 27.

The final slot that we listed here is the last one to emerge near the end of August. Pragmatic Play always keeps a surprise for its players, and this month that’s Peaky Blinders. If you are a fan of this famous English TV show, you are going to love the video slot version of the eponymous name.

As this is an industry-first branded slot for Pragmatic Play, the company had to choose a perfect franchise. Peaky Blinders, with its history with crime and gambling in interwar Birmingham, is a show fit for slots. Inside the game, the provider inserted several features, including By Order of the Peaky Blinders Free Spins.