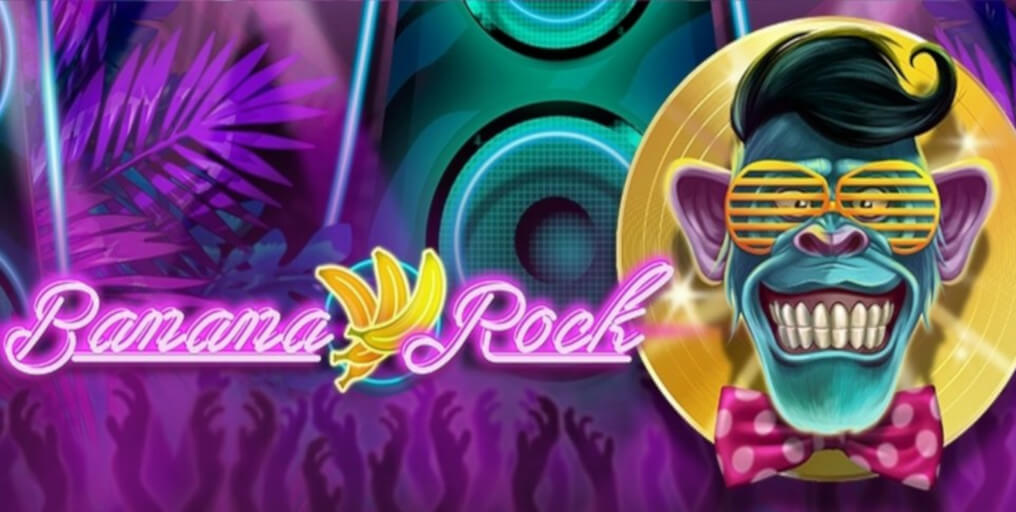 Play’n GO has released a brand new high variance groovy action so get ready to hit your favourite online casino and try out Banana Rock.

Although Play’n GO has developed a neon, 80s-styled game that hosts a funky looking band, there is no room for monkey business since this game offers some serious wins. This slot will make you smile either with its fun gameplay, interesting theme or winning potential.

Get on the stage and enjoy listening to the Banana Rock band.

Five monkeys playing in a rock band bring you some great soundtracks and lucrative features such as respins, free spins, wilds and multipliers. High-paying symbols are a percussionist, a bass player, a keyboardist, a drummer and a guitarist who is the top paying symbol that will give you 40 times the stake should you land 5 across a full payline.

If you manage to land two or more wilds anywhere on the reels you will trigger the Rock ‘n’ Rolling Respin feature during which you will see the lead singer dancing across the reels, leaving a trail of wild symbols behind him for further wins.

The band logo is the scatter and appears only on first and final row. Landing two scatters will trigger ten free spins. The goal of a Free Spins feature is to collect all band members by landing their stacked symbols on the reels and filling the power meter. This will trigger a multiplier between 2x and 5x to any winning combination formed with any of the band members. After the Free Spins feature ends, the game transitions to an Encore Spin.

Although a respin is available both in the base game and free spins feature, it cannot be triggered in the Encore Spin. The Encore Spin is a guaranteed Win Spin that only involves band member symbols. The multiplier from the free spins feature are added together and you can end up with a multiplier of up to 25x. This leads to 2500 times your stake and possible max win of $250,000.

Banana Rock has all the elements to become another success in a row for the Play’n GO portfolio.

Filled with phenomenal visuals, a decadent free spins round that gives an Encore Spin with a staggering 25x multiplier and $250,000 possible win, what’s not to like?