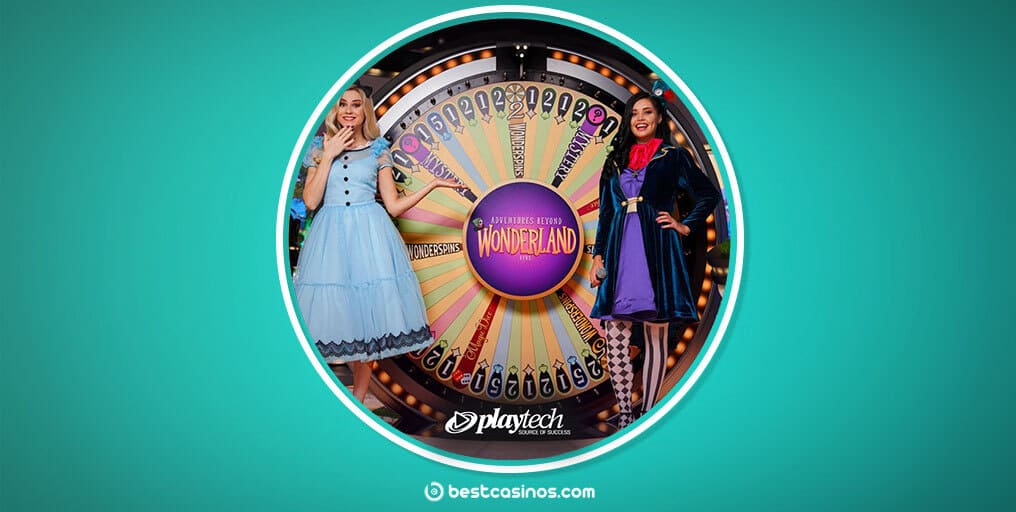 We had a look at the latest release and investigated key features, payouts, and bets. 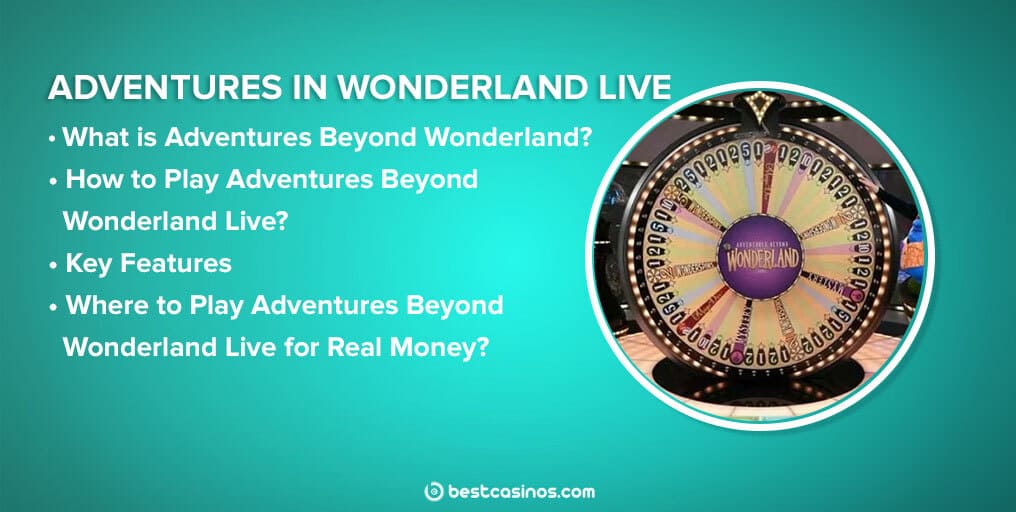 What Is Adventures Beyond Wonderland Live?

The game takes you down the rabbit hole and plunges you deep inside Alice’s Wonderland. We had a look at the latest release and investigated key features, payouts, and bets. We also prepared a detailed how to play Adventures Beyond Wonderland guide where you’ll see where to play the game too.

But before we get to the guide and give you an example of a round in this exciting game show, let’s first explain the concept behind the release.

Essentially, Adventures Beyond Wonderland live is a game show hosted by Playtech’s dealers. Thematically, it draws inspiration from Alice in Wonderland novel, which you will instantly notice once you enter the game.

It is meant to be a live casino version of the eponymous slot by Ash Gaming, one of Playtech’s subsidiaries. 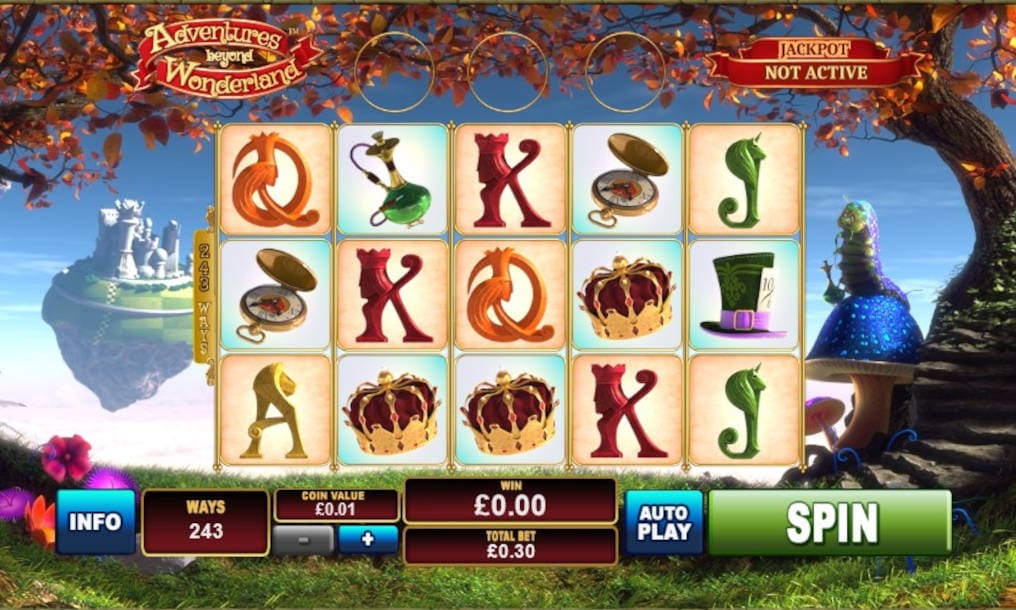 For this game show, Playtech chose to make it a money wheel version, meaning the entire action is based around a grand wheel with 54 segments. The segments include numbers and 3 bonus rounds. The bonus rounds primarily contain multipliers which you can use to boost your balance.

Playtech used augmented reality to bring certain characters to life. For instance, Alice and Mad Hatter are played by the hosts, but the caterpillar and the rabbit appear as AI animations. You will get to meet them once you land in the bonus rounds.

Behind the wheel is a picturesque backdrop which creates a vivid imagery and helps players immerse in Wonderland. Giant chess pieces and figures are scattered around the studio as well.

he technical side of the game is as impressive as the visual aspect. Players get to bet on the spinning wheel in hopes of winning cash prizes and bonus rounds. In doing so, they are expected to place wagers which range between €0.10 and €1,000. By looking at the wagering limits, it is easy to see this release will be a popular choice for low and high rollers alike.

The wheel consists of 54 segments which are either numbers or bonus rounds. Bonus rounds appear eight times on the wheel, while all other segments belong to numbers.

When it comes to numbers, you can wager on the numbers 1, 2, 5, and 10. The number 1 is the most present on the wheel, appearing over 20 times. The rarest digit on the wheel is the number 10.

Your win will depend on the segment you chose to wager on. Here is a full table with all wagering options, their RTP rates, and payouts.

Payouts for wagering on numbers has between 1:1 to 10:1 rate. However, when it comes to bonus rounds, they are all capped at €500K. The highest amount that you can win within these rounds is the same for all of them. You might have noticed that the game has three bonus rounds, but the wheel contains two versions of WonderSpins. You can either get 2 WonderSpins or 5 WonderSpins, depending on the segment the wheel stops on.

How to Play Adventures Beyond Wonderland Live

This is a money wheel type of game, which means your only task is to post wagers on certain wheel segments. You have 8 different betting options to choose from.

One Adventures Beyond Wonderland live round starts when you pick a bet. Be careful though – it’s a fast-paced game, and you have less than 15 seconds to pick a bet. While you are picking your bet, you are also picking the wagering amount. The least you can wager on a round is €0.10, while the maximum bet is€1,000.

Here is a step-by-step guide for a round in Adventures Beyond Wonderland live.

The game offers three different bonus rounds, but there are four segments which cover these boosters. You can see in the table above how many times each symbol appears on the wheel.

Let’s take a closer look at each of the rounds.

This is by far the most interesting feature as it adds two additional wheels to the main one. WonderSpins are actually Free Spins, which means you get either 2 or 5 spins (depending on the symbol which landed on the main wheel in the base game). The first additional wheel holds multipliers, while the second hosts additional spins.

The Multiplier wheel options are as follows:

The inner wheel contains +2, +5, +8, and +10 segments. The rabbit picks a random Multiplier which will apply to the main wheel segment. If the wheel lands on that spot, you will get the multiplier. The same goes for the inner wheel.

The second booster of the game is Magic Dice, which is – in a rather self-explanatory fashion – a dice game. The round opens to a 6×4 grid with three types of symbols. There is an arrow pointing upward, grid Multipliers, and individual Multipliers.

Before the round starts, you should pick a die ( red or white) and wait for the result of the shake of the automatic shaker.

The Mystery Bonus segment is a tricky one. You cannot wager on it, but if the wheel stops at this spot, all players participating in the round will receive a delicious treat. The prize is a Multiplier, but there are certain variations to this round as well.

Where to Play Adventures Beyond Wonderland Live for Real Money?

After everything we’ve seen from the game so far, it is clear it will become a blazing hit across the globe very soon. And Playtech casinos are ready for it!

For now, the game is available exclusively at GVC Holdings casinos. In other words, only brands which belong to GVC own and offer the game to their players.

So, where to play Adventures Beyond Wonderland live?

We are sure it will soon find its way to other Playtech casinos. If you are not a member of any GVC casino, you can wait for its release by playing other ingenious live Playtech releases.

Our top choice for any Playtech game (this release included) is William Hill casino.

Remember, you cannot play Adventures Beyond Wonderland for free as it is a live casino game show!

A hot live game like this is bound to charm the audience and keep us entranced for hours on end. The use of AR made it even more interesting or the players, so we are hoping to see more of this game and Playtech.

If you liked Adventures Beyond Wonderland live, don’t hesitate to give it a go. Reviewing it for you was a pleasure for us, and we hope we get to deliver even more info in upcoming weeks. And if you wish to share your thoughts with us, drop us a line in the comments section below.