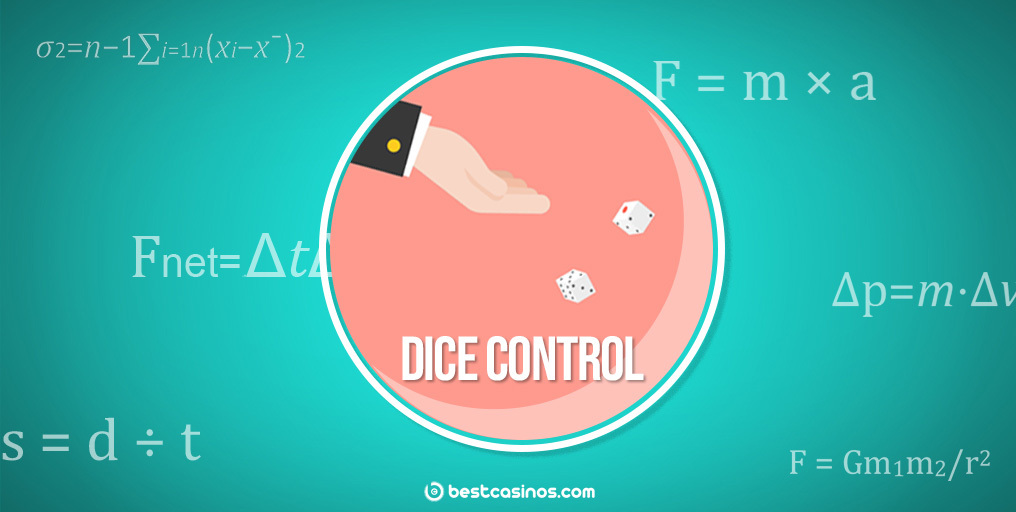 As games of luck, dice games generally do not require advanced skills or tactics. However, dice players have found a way to use tactics even in craps or similar games – through the infamous dice control.

Learn what is dice control, how efficient controlled shooting is, and the controversy surrounding it. BestCasinos brings you the full account of dice control, including the physical elements of shooting.

What Is Dice Control?

For most players, the idea of controlling the outcome in dice games like craps seems too far-fetched. That’s why the concept is a controversial topic in the gambling industry. Who can command the dice and instruct them how to land?

Well, a lot of people actually agree with the dice control theory and are certain such techniques pay off. Dice are hard to control, but it is in no way impossible.

Experts in dice control claim they can govern the toss and direct the dice in the wanted direction to land in the way they want them to. Moreover, many experts claim they have actual results and that it is not, in fact, a myth but rather a reliable theory. A theory that, although difficult to prove, is quite rewarding.

The Theory of Precision Shooting

The theory of dice control states that by throwing the dice in the same way multiple times, you have more chances of achieving the desired outcome than relying on random throws. This is a logical conclusion based on statistics and physics.

However, the nature of dice games, and most of all, craps, is unpredictable, so controlling the dice is a tough task. It includes a variety of important aspects and is not something you can easily achieve after a few spins.

Therefore, learning and mastering precision shooting lasts for months, often years. Moreover, to do it properly, players need to incorporate several techniques and pay attention to a number of elements and steps while performing a single toss.

To properly understand what dice control is, we have to learn from the pros. And there’s a no bigger pro at dice control in craps than Dominic LoRiggio, whom wider audiences know as the Dominator.

According to LoRiggio, dice control is an athletic activity. Hence, playing craps and using this specific tactic should be akin to playing a sport requiring both physical and mental preparedness. Therefore, we can say there are two main aspects of precision shooting: mental and physical.

The physical aspect of the game includes a lot more than the mental side. There are many physical technicalities to master – from the way you pick up the dice to the hand movement needed for a precise shot. First, you need to know where to stand, as your physical proximity to the table influences the throw. Next, you need to know how to pick up the dice – there are several ways to do so – and then toss them. All in all, a strenuous procedure, but according to dice control experts, a very worthwhile one.

The mental side of the story is not physically tiring, but it certainly has the power to put a toll on your mind. How so? Well, for starters, the main thing you need is a winner’s mentality. That means you must gather strength and arm yourself with patience to achieve greatness. Losses and misses are not a problem but rather a way for you to learn. Finally, you need to learn how to focus and shut everyone out while you toss the dice, as you cannot afford distractions.

For novices, dice control might mean just a couple of pointers about how to hold and throw the dice. But precision shooting is more than that. A shooter must be familiar with multiple laws of physics, as throwing dice that spin in the air and bump the wall of the table has a lot to do with physics.

To learn to properly throw controlled dice, you must pay attention to every element of the throw. That includes the grip, the toss, and the spin before it hits the wall of the craps table. To prepare for a perfect throw, you must find a balance in approaching the table and picking up the dice. That’s part of the pre-throw activity.

Before you even consider taking the dice, you first need to find a good position next to the table. The centre of the table is usually the best place as it gives you the best chances of a successful toss. Then, it’s all about the setting. The setting is the way you pick up the dice. When they arrive, you have an option to pick them up without adjusting them. This increases the randomness of the throw, so you might want to arrange them in a way that suits you. For a successful toss rate, the best decision is to arrange and pick them up in the same manner, every single time.

For the throw, you should make sure you are gripping the dice correctly – not too much pressure, but still firm so they wouldn’t fall from your hands. Again, you need to be very careful when gripping them and aim to do so identically every time. When you grip the dice, lift them up and flick them in the direction of the opposite wall of the table. The hand movement involved needs to be carefully adjusted as well – practice so it turns out the same on every toss. The way you throw them is something personal, as every controlled shooter has a unique way of throwing them.

Here are some of the examples of dice settings you can arrange before your toss.

It’s up to the players to pick the one they want to use. Some are more appropriate for beginners, such as Hardway and All 7. Other sets are more for experienced players who are well-versed in precision shooting.

Yes, even amateurs can learn precision shooting. However, bear in mind that you will have to work harder than experienced players to reach a pro-level at controlled dice throwing. This is a serious undertaking that requires a lot of practice. Experts in precision shooting even say they have spent months – often years – perfecting their moves at the table.

As you have seen, it takes a lot of concentration to remember all the steps, let alone incorporate them all in one routine that flows perfectly. Therefore, the answer to this question is yes, amateurs can learn dice control, but it will take a lot of time, patience, and hard work to achieve results.

Can dice control be applied to online craps?

Unfortunately, no. Dice control that we’ve covered in this article is primarily related to land-based craps and tables with dice games that exist in brick-and-mortar venues. Therefore, you cannot practice physical moves if you plan to play online craps.

So, does dice control really work? This question has plagued numerous players worldwide, and some scientists even published a probabilistic study of dice control in craps. However, we are afraid that we are not experts and therefore cannot claim anything. We know that shooting dice in craps is a random process, and it’s hard to control them. However, who can claim that using enhanced skills and techniques to achieve the desired result won’t bring you to that result?

Dice control is a science as much as it is an athletic activity. We believe that you can become a proficient precision shooter with enough practice, but don’t put all your eggs in one basket. No one can win every time, so don’t let losses or misses bother you too much. Practice, explore strategies, but more importantly – enjoy the beautiful game of craps.