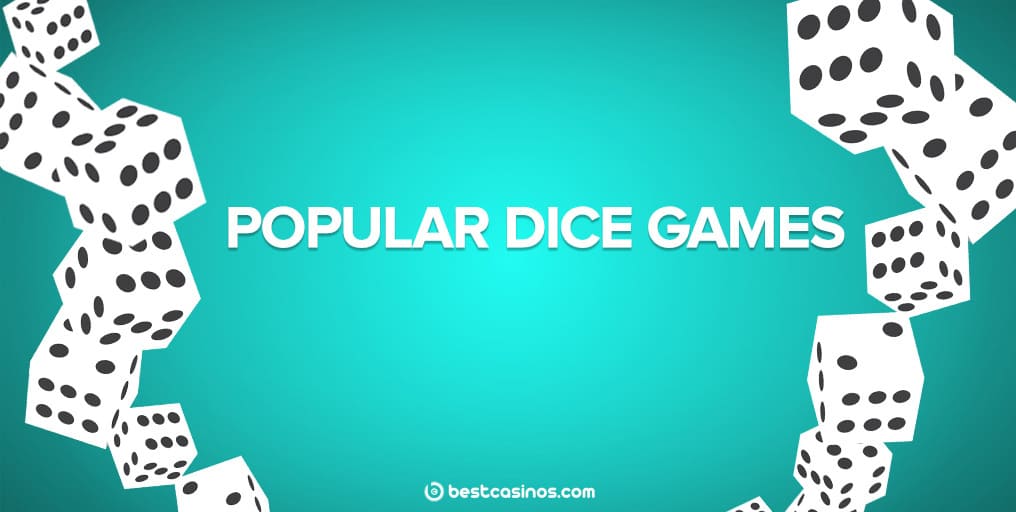 Craps, sic bo, even Yahtzee – these are all incredibly popular dice games. Since the dawn of time, gambling has relied more on luck than on skill, and dice games are the definition of lucky coincidences.

Dice games are gambling games that include dice. A wide array of games has sprung up over the years, with a couple of variants taking centre stage due to their unwavering popularity. BestCasinos inspected the most popular variants of casino games with dice and brought them right to your screens.

Gambling is quite entertaining, and there’s almost no limits to human creativity when it comes to devising ways to have fun. Hence, we should not be surprised that people have come up with so many casino games – from roulette to blackjack, craps, and online slots.

But dice casino games take precedence as the silent sovereigns of the gambling world. Blackjack and roulette are more commercialised, and reasons are aplenty. However, one of the biggest reasons dice game are not flashed around is that they exclusively rely on luck. In roulette and blackjack, players have more interference with the outcome, hence they can apply strategies to boost their chances. In gambling with dice, strategies have little to no effect, at least most of the time.

We rounded up the most popular casino sports around the world, which use one or more dice. The results are in.

Here are the most popular dice games in casinos worldwide.

During selection, our hands were admittedly full with dozens of dice variants. However, they are not all related to gambling, which is why we’ve excluded them from the list. One example would be Yahtzee, which is a worldwide phenomenon but is not considered a casino game. Instead, we’ve focused on craps and sic bo, the two most popular casino games in the industry. They are closely followed by Klondike and Chuck-a-luck, as well as Banca Francesa and Cee-lo.

Craps is the first thing that comes to mind whenever someone mentions dice games or even casino. Before Evolution launched its Craps Live and First Person Craps, it was unusual to see it in online casinos. The reason is easy to understand – craps is tough to translate into RNG and online terms.

The game involves a shooter, two dice, and several seemingly complicated wagers even pros struggle to remember. But the rules are not indeed that much complicated, there’s just a lot to absorb when you visit a craps table.

A simple craps round consists of a shooter throwing dice across the table and other players betting on the outcome. The outcomes of 7 and 11 are notorious, and that’s one of the most important things to learn about this dice variant. Moreover, you have multi-roll wagers to keep you in the round throughout the session.

The second game on our list is another one of casino dice classics. The players in Asia are especially fond of it. Sic Bo is an enjoyable casino sport and one relatively easy to master at that. The entire point of sic bo lies in the prediction of the possible outcomes. A typical round starts with placing bets. You have an array of wagering options to choose from during this phase. When you are ready, it’s time to roll them. The dice will land anywhere on the layout, and you will see the result. According to your wager, you will either lose or win – there’s nothing in between.

Bear in mind that we are talking about online Sic Bo. Sic Bo live is becoming more and more popular, thanks to a few prominent providers’ efforts to bring it to the digital realm. We have several live sic bo guides worth checking out if you are interested in that type of content.

Chuck-a-Luck is a gambling 3-dice game from Australia. Also known as birdcage, the game uses almost identical rules to sic bo, but it is easier to master. One of the reasons why Chuck-a-Luck is a more accessible game is because it offers fewer wagering options. In that sense, you have a clearer idea of what to wager on, but this hinders winning chances. Wagering options in Chuck-a-Luck are Single Die, Any Triple, Big/Small, Field. Bear in mind that they are not always included, as the rules often diverge from the standard version.

The simplification of bets led to an increase of the house edge. This variant may have a 4.6-7.9% range in house edge, meaning you stand to lose a great deal if you play with the wrong rules. If you are familiar with the Vietnamese  Bau cua ca cop, you will notice that the two variants have remarkable similarities. They are almost identical.

Sic Bo has dozens of betting options, Chuck-a-Luck less. But nothing beats Banca Francesa, which has only three of those.

You can wager on Big, Small, and Aces. Each option has its advantages and disadvantages, with the first two having similar odds and thus pay even money. Throughout the round, the dealer will throw three dice while you work to figure out which combination will land. The Big refers to 14-16, while the Small combos are 5-7 in total. Aces are when all three dice show a one.

It has a 1.5% house advantage, and you can withdraw bets if you think you won’t get them -yes, you can withdraw wagers mid-round – and you’ll win a 60x payout if you win the Aces bet. And unfortunately, there’s a but.

The game is exceedingly popular in Portugal, but the online realm hasn’t had a chance to familiarise itself with it that much. Yes, you can play it online, but your options are limited.

Cee-Lo (nothing to do with Cee-lo Green) is a 3-dice game popular in Asian countries. The variant has no standard edition but rather a compilation of variants and rules that are different almost everywhere. Nevertheless, every single version holds the 4-5-6 sequence as the winning one. Rules typically differentiate between Cee-Lo with and without a bank.

Why Dice Games Never Go out of Fashion

The popularity of dice games that never wanes has been a recurring topic around casinos for years. How come these easy and straightforward games have such strong player bases? Why do players insist on playing them when they can play dozens of other games?

The answer is, like them, simple: simplicity wraps around elegance, while the essence remains uncapturable. One cannot simply ‘crack’ dice games – dice games are unpredictable!

We’ve shown you the most popular dice variants across online casinos, but there are many other exciting variants to try out. Stay with BestCasinos to see different trendy variants and updates in our upcoming articles!