If you love Bingo, Microgaming is the provider for you. Seriously, this game manufacturer is an expert in creating top-notch Bingo games. Its Bingo library spans dozens of titles, and Bingo Bonanza is among the best ones there. Hence, it seems only fitting to start from the beginning – this is the first Bingo game that Microgaming released back in 2009. Although it might seem outdated, the look and feel of the game make it a timeless experience that you must try.

With Bingo Bonanza, you get to experience the best Bingo gameplay out there. The game is loaded with Multipliers that are the only balls that you collect. That’s right; there are no numbered balls that you create tickets for – only Multipliers. And if you manage to score two identical balls, you win – that is the entire point of the game. For an average Bingo player, the game offers a lot of winning potential through these nifty Multipliers.

But as you can guess, it is not that easy to win these Multipliers. Waiting for a win can be a tad tedious, hence the game’s high volatility. Moreover, the game boasts 95.95% RTP, while the hit rate peaks at 22.88%. Its temperamental nature is exactly what attracts the players the most. Also, bear in mind that the game was released more than a decade ago, and Microgaming upgraded the payouts since then considerably. In Bingo Bonanza, you can place between €0.50 and €10 per round. 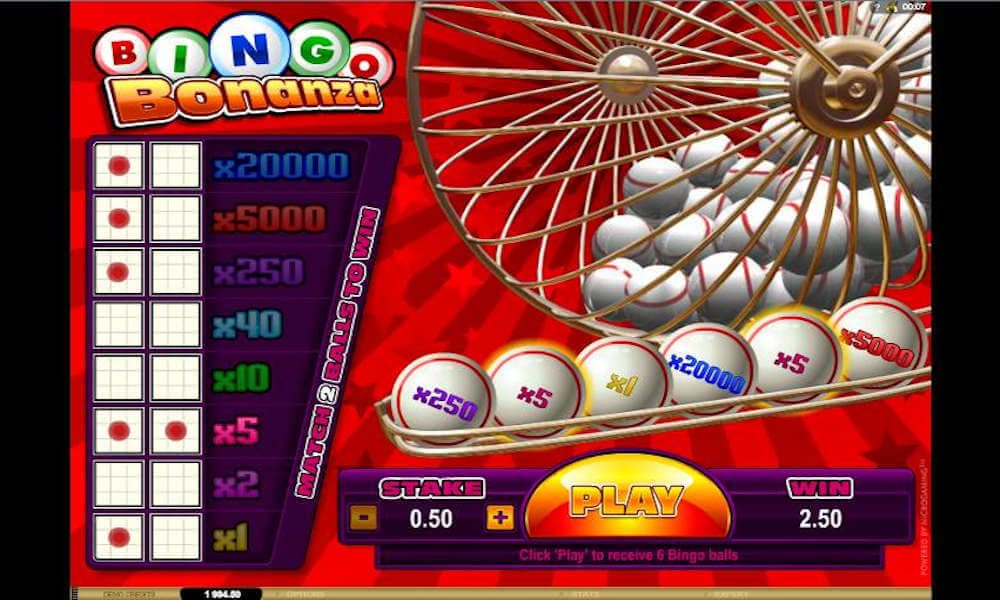 HOW TO PLAY Bingo Bonanza?

Playing Bingo should not be that hard, right? Well, if you ask Microgaming, it’s easy as breathing. At least, that is the impression that we get from its Bingo games. Bingo Bonanza, as the first Bingo game from Microgaming, came out more than a decade ago. But it managed to amass a steady fanbase that is loyal to the game and this provider. How, you ask? Easy – the game is a magnificent piece of Bingo entertainment that you cannot find anywhere else.

In Bingo Bonanza, the focus is on the game, so don’t expect to find fancy aesthetics and design. Instead, the game is rather simplified in the visual department. Plus, it was released more than ten years ago. Nevertheless, what it lacks in visuals, it compensates in gameplay. The main point in the game is to draw two identical balls with Multipliers. If you succeed in doing that, you win, it’s that easy. In each round, you will get six balls with Multipliers. There are no regular digits and tickets – the Multipliers are all you can get here.

Bets in Bingo Bonanza start from €0.50 per round. The maximum bet that you can place within a round is €10. Microgaming made the game interesting by introducing Multipliers, but it complicated the game with technicalities. There is high volatility and 95.95% RTP. The hit rate in Bingo Bonanza is 22.88%, which means you should not expect wins often. But, thanks to the game’s main attraction, you can win up to 20,000x the stake, which is unusually high for Bingo.

There aren’t really many features inside this game. That is both due to the game type and the fact it came out in 2009. Nevertheless, it has Multipliers, which is more than enough for big wins. Let’s see what you can get in the game.

Who thought Bingo could be this amazing? We have to be honest, Microgaming spoiled us with its impressive releases. Bingo Bonanza, as the spark that started it all, amazed us the most. Although the game came out more than ten years ago, it’s still hip to play it.

There are no traditional balls and tickets to create a hassle for you. Instead, there are only Multipliers that, if you catch two, bring your prizes. The maximum prize that you can win here is 20,000x – precisely the size of the biggest one in the game.

To calculate the amount that you can win here, you will need the betting limit. Here, the minimum bet is €0.50, which is completely normal for Bingo. Moreover, the maximum bet reflects that traditional side as well, because the max amount is €10. You can find the game in all Microgaming casinos that offer Bingo games.

WHERE TO PLAY BINGO BONANZA FOR REAL MONEY:

Players, we need your help with how we should to rank and rate these reviewed casino games. You can help us by rating this game, and if you really enjoyed playing Bingo Bonanza. You can also share it with your friends on Facebook, Twitter and via email. For all freeplay games, if your free credits run out, simply just refresh the page and your balance will be restored.

See all of our Bingo game reviews where you can play 9 bingo games for real money in any of our recommended casino sites.

Aurora Wilds
You know what they say, it’s all about the jackpot! Luckily for us, Microgaming ...
Software:
Games Global, Microgaming
Reels:
5
Paylines:
10
RTP:
96.20%
Volatility:
Medium