Neko Games Bingote is a video bingo game inspired by Don Quixote de la Mancha. Bingote bingo game was created exclusively for Microgaming casinos as Neko Games is part of the growing network of studios. Inside the game, players go through La Racha to obtain the massive Bingote jackpote. The road is not easy, but there are so many bonuses that you will reach the 5,000x jackpot in no time.

Use the game’s boosters to reach your destination faster. You have golden shields, Wild Balls, and three bonus games at your disposal! The three bonus games are a fun way to add pizzazz to the game, as you get to play and win bigger prizes. Enjoy Armour Bonus features worth 1,040x, or head straight into the Windmills Monsters picker game. You might get a prize worth 2,300x the stake! Finally, the Diamantea’s Castle bonus brings forth prizes that quickly reach 1,646x the stake, but you have a long way before you reach the castle.

The game has a 95.09% RTP, which is common with video bingo games. The hit frequency is better than in most other games as it reaches 64.28%. As you can imagine, the game has a medium-high variance level, another thing that did not surprise us. The Don Bingote bingo game has a €0.05-€40 betting limit that can bring you the 5,000x maximum payout. You can purchase up to four tickets per round. To learn more about the Neko Games Bingote game, read our Bingote review below! 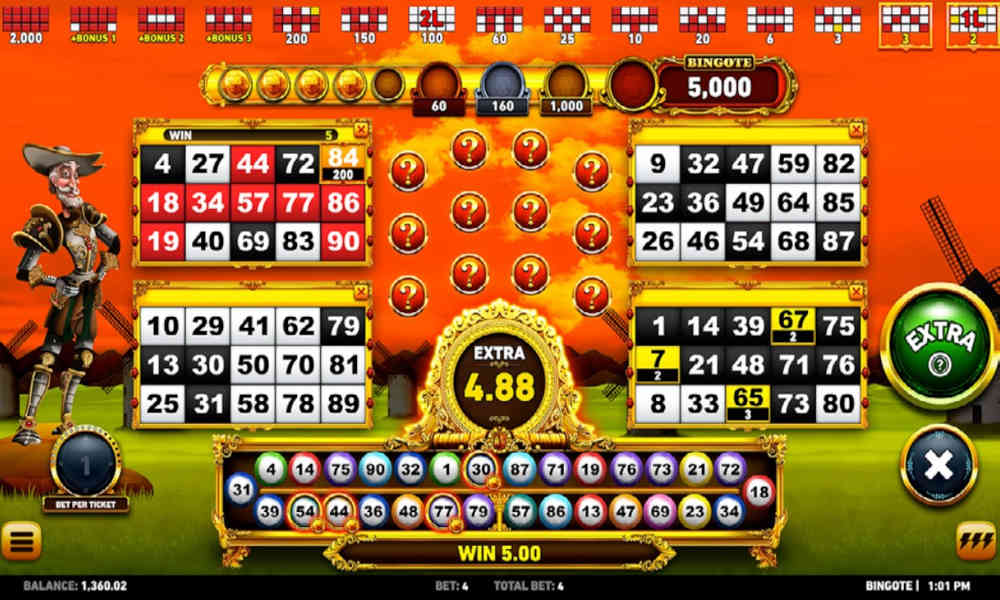 You know how to play bingo, so we won’t bother you with basic instructions. Bingote is not different from other video bingo games on the market, except it was made by the one and only Neko Games! This company thrives on creating games that are easy to understand yet provide so much fun to the players. The goal behind Bingote was to highlight the importance of Spanish-speaking cultures as the famous Don Quixote is one of the main symbols of Hispanic literature. His constant fight with the windmills and other monsters earned him a reputation in the realm of books – as well as other forms of entertainment. However, we must admit, we were delighted when we saw that the knight finally found his way to online casino gaming.

Inside Bingote, you play to win amazing game prizes. the main prize is obtainable only if you buy four tickets – the maximum number of tickets per round – but trust us, it’s worth it. You don’t have to buy all four tickets, but rather pick between 1 and four. Set the bet before you start the round and relax as you watch the game lead you through the initial ball draw and three bonus features. It’s 90-ball bingo, yes, so the numbers drawn can range from 1 to 90. In each round, the game will randomly draw 30 balls from the RNG drum, but you can add extra balls if you want a bit more action. You have to pay for each extra ball, but if you need one number to complete a combo that pays 8x or higher, the extra ball draw automatically starts.

If you are a fan of mobile gambling, great news – the game is available both on desktop and mobile devices. Neko Games is a great game provider who pays close attention to the needs of its audience. That’s why the game comes with 95.09% RTP and medium-high volatility, as well as 5,000x Bingote Jackpots! To play the game, place a wager that’s between €0.05 and €40 per round. Join Don Quixote and conquer La Racha to win exceptional prizes!

Don Bingote bingo game might be a traditional bingo game with 90 balls, but it’s full of surprises. We loved what Neko Games did with game features, as they significantly boost the gaming potential – not to mention payouts.

If you live and breathe bingo as Neko Games does, don’t miss this amazing casino game release! Bingote is an amazing bingo game with a splendid Don Quixote theme, nice visuals, and a whopping 5,000x Bingote Jackpot prize!

Neko Games also added a wealth of game boosters inside, so there’s never a dull moment inside. From three different bonus games to the marvellous jackpot, there’s nothing you cannot do in this game.

WHERE TO PLAY BINGOTE FOR REAL MONEY:

Players, we need your help with how we should to rank and rate these reviewed casino games. You can help us by rating this game, and if you really enjoyed playing Bingote. You can also share it with your friends on Facebook, Twitter and via email. For all freeplay games, if your free credits run out, simply just refresh the page and your balance will be restored.

See all of our Bingo game reviews where you can play 9 bingo games for real money in any of our recommended casino sites.

Crystal Rift
Teaming up with independent game studios might have been one of the best business ...
Software:
Games Global, Microgaming
Reels:
5
Paylines:
25
RTP:
96%
Volatility:
Medium