Playtech might not be a prolific live casino supplier, but when one release drops, you simply know it’s going to be excellent. Everybody’s Jackpot live is a brand-new 2022 release that combines slots and live casino entertainment.

In its essence, Everybody’s Jackpot live slot is a community slot game in real time. It comes complete with a custom studio, a dedicated host, and a massive board comprised of 4 separate sets of reels. Playtech made the game based on the popular Everybody’s Jackpot slot which produces a progressive jackpot every day. Essentially, the jackpot is split in half, with one half going to one player, and the other half being divided amongst all other participants.

Everybody’s Jackpot Live features four 3×3 slot grids, each offering 8 paylines, bringing the tally to 32 paylines in total. Players have 32 ways to win a prize. But the main goal is to trigger one of the four bonus rounds. These four bonus rounds are Free Games, Walter’s Bubble Bar, Pick Me Plaza, and The Block. Each brings something very unique to the game, and to enter them you only need three scatters and that’s it. 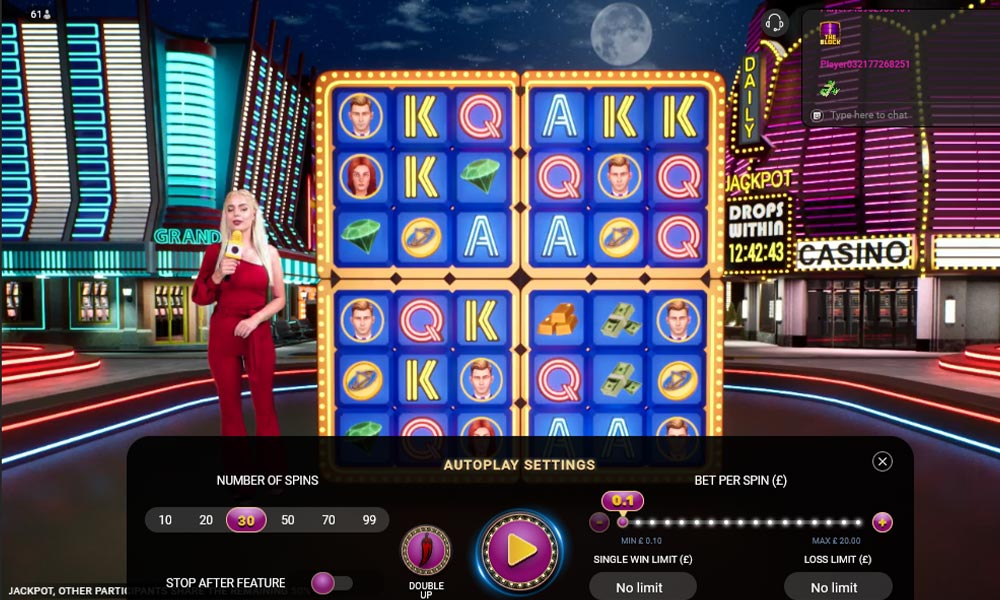 HOW TO PLAY Everybody’s Jackpot Live?

Don’t worry, it’s not hard to learn the ropes. If anything, the game is quite easy to play, as it’s essentially a live slot game. The game screen entails 4 slot grids with 3 reels and 3 rows. Each grid spins in its own right, offering 8 paylines on which you can score a payout. Playtech also threw in a host that narrates as the spins go along, which fits perfectly the Vegas-themed backdrop behind the grid. The host guides the players throughout the rounds, but unlike Playtech’s other live slot – the Buffalo Blitz Live, there is no big red button to push and start the round. Players join Autoplay right away and play for as long as they want.

To win, players need to see three matching symbols across a payline. The game entails 8 paylines per grid, which means there are 32 paylines in total. Each win produces a multiplier win, and if you happen to have the same matching icons win across multiple paylines, you will get a Main Game Boost, which means your win is multiplied by the number of winning lines. The highest paying icons are the female and male characters paying 10x and 25x, respectively.

The game uses four bonus rounds and two jackpots to deliver prizes to players. Speaking of prizes, the highest you can win in Everybody’s Jackpot live is 6,750x the stake. The optimal RTP for the game is 96.75%, but the lowest it can go when we take into consideration the boosters is 94.25%. The variance level is extremely high, so be careful when placing bets. The lowest you can wager on a round is £0.10, while the highest is £20.

Everybody’s Jackpot live is a slot game but also a live game show. And like all slots, it comes with bonus features. In this case, we have four bonus rounds, and they all share one method of unlocking them. The key to any bonus round is a combo of 3 matching Scatters.

At the start of each round, one bonus round type will be randomly chosen as the possible option that you can win in case you land 3 Scatters. Below are more details about each bonus round.

Are you in the mood to try something new and exciting? Say hello to Playtech’s multifaceted Everybody’s Jackpot Live slot game! Is it a slot, or is it a live game show? It’s both!

Unlike Buffalo Blitz Live, Everybody’s Jackpot live slot has four 3×3 slots with four different bonus rounds. All players work together to unlock the Daily jackpot – or possibly even the Grand Jackpot, both of which are progressive!

The game is live in all Playtech online casinos. Stay tuned for more exciting news, games, and promotions at BestCasinos.

WHERE TO PLAY EVERYBODY’S JACKPOT LIVE FOR REAL MONEY:

Players, we need your help with how we should to rank and rate these reviewed casino games. You can help us by rating this game, and if you really enjoyed playing Everybody’s Jackpot Live. You can also share it with your friends on Facebook, Twitter and via email. For all freeplay games, if your free credits run out, simply just refresh the page and your balance will be restored.

See all of our Live Casino Games game reviews where you can play 81 live casino games games for real money in any of our recommended casino sites.

Robocop
Robocop is a themed game that has been developed by Playtech and it is based on the ...
Software:
Playtech
Reels:
5
Paylines:
25
RTP:
96.24%
Volatility:
Medium

Who Wants to Be a Millionaire
Players are always looking for games that they can relate to and with Playtech’s ...
Software:
Playtech
Reels:
5
Paylines:
20
RTP:
91%
Volatility:
Medium