Football Studio Dice is a unique and entertaining football-themed live casino game from Evolution. The game caters to fans of live dealer games who want fast and simple gameplay. According to the developer, the game shares certain similarities to their Bac Bo Live dice game.

Football Studio Dice Live adds the emotions and atmosphere of a live football match, allowing you to cheer for the Home or Away side while engaging with the game hosts and other players. Home and Away scores are made up of the sum of two dice. They are automatically shaken in four individual shakers, two for each side. Naturally, the highest two-dice total wins. However, just like a real football match, this game features two halves. Even if you lose the ‘First Half’ dice shake, you can always come back in the ‘Second Half’ dice shake.

This Evolution live dice game is broadcasted live from Evolution’s hi-tech football-themed studio. It captures the imagination of football fans all over the world. Other providers have tried combining the popular sport and a live casino game before so this is not the first time we are seeing a football-themed live game. And, Evolution seems to have done a terrific job. Whether you back the Home or Away side, or bet on the big-payout potential of a Draw, the title offers a unique world of constant, end-to-end excitement.

So, if you are a football and a dice live casino games fan, then do not miss the chance to try this Evolution release! If you wish to know more about this unique title, keep reading our Football Studio Dice Live game review. 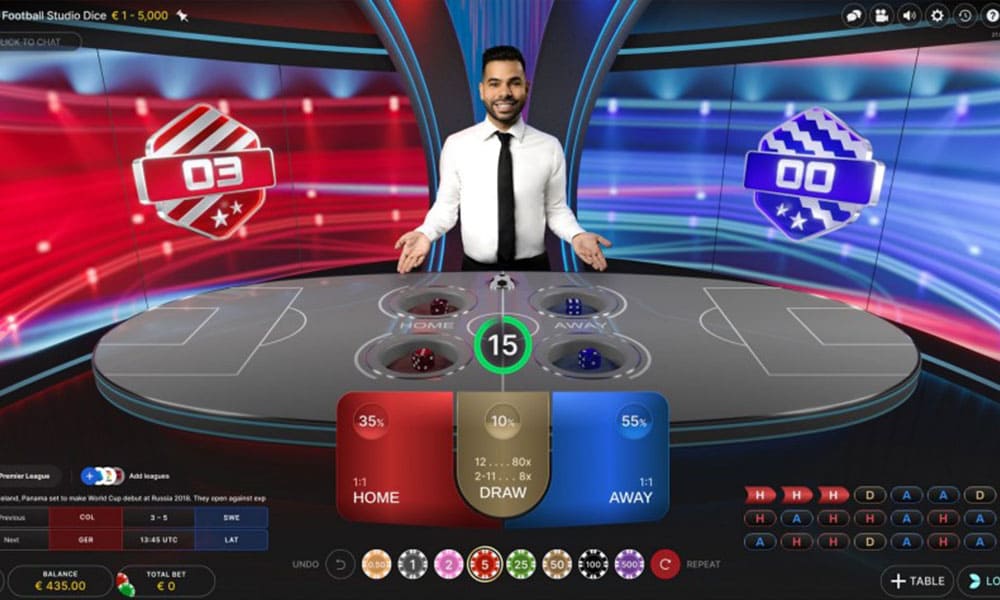 HOW TO PLAY Football Studio Dice?

If you are wondering how to play Football Studio Dice, you have come to the right place. The game is simple, straightforward and extremely easy to master. Once you start the game, you will see a table with four dice. Two dice are on the Home side while the remaining two represent the Away side. Each dice is placed in an individual automatic shaker. The top two shakers are the ‘First Half’, and the bottom two are the ‘Second Half’.

During the betting time, all dice will start to shake at once, stopping at different times making the game even more exciting and engaging. Once the last two dice have stopped, the winning side is declared. Your goal is to predict which will be the winning side, namely which side will show the highest two-dice total. You have the option of placing a bet on Home, Away, and/or Draw.

Since Evolution is the leading provider when it comes to live dealer games, you already know that the video quality of Football Studio Dice will reflect that. HD cameras are there to provide a view of the dice shakers and the host at multiple angles. The studio also features a top-notch design. The developer has made sure to make the table look just like a football field, which definitely takes the experience to a whole new level. You will also be apple to keep an eye on the current ‘score’ thanks to the screen located behind the host. That way you will be able to track which side is on a winning streak: Home or Away.

Football Studio Dice Live is a game show title, so it is safe to assume that it does not feature any extra special features. The game rules are simple and straightforward while the gameplay is fun and engaging.

That being said, Evolution did implement a few extra functions when it comes to the user interface that will make the game even more convenient to play. Football Studio Dice displays the results of the previous rounds in the bottom right corner. In the other corner, you will be able to see news, upcoming matches, and live scores for ongoing football matches.

As we have already mentioned, each round starts with players placing their bets with an aim to predict whether Home or Away will win. Players also have the opportunity of betting on a Draw, namely, if the round will be a tie. Home and Away have even money payouts, while Draw bets pay 7:1 under most circumstances. However, if a draw occurs with twelve on both sides, the payout is 79:1. This Evolution release comes with an RTP of 97.75% for Home and Away bets and 95.68% for a Draw.

In addition, players can also use the live chat option to communicate with the host and other players. Combined with results displayed in two halves, watching crowd reactions turn sweet or sour can be extremely entertaining.

Overall, Football Studio Dice is a unique and entertaining football-themed live casino game. It will mostly attract those players who get a kick out of football and want fast and simple gameplay. Players have the opportunity of experiencing the emotions and atmosphere of a live football match while cheering for the Home or Away side. In addition, they can also engage with Evolution’s lively game hosts, and throw themselves into the football conversation.

This Evolution release is extremely easy to play, and if you love dice games and football, you should definitely give this live game a shot. The gameplay is highly entertaining, the video quality is top-notch, and the user interface is easy to use. All in all, Football Studio Dice is like a fresh breeze in the world of live casino games, and will definitely attract many live casino games players.

WHERE TO PLAY FOOTBALL STUDIO DICE FOR REAL MONEY:

Players, we need your help with how we should to rank and rate these reviewed casino games. You can help us by rating this game, and if you really enjoyed playing Football Studio Dice. You can also share it with your friends on Facebook, Twitter and via email. For all freeplay games, if your free credits run out, simply just refresh the page and your balance will be restored.

See all of our Live Casino Games game reviews where you can play 79 live casino games games for real money in any of our recommended casino sites.

Emoji Planet
Emoji Planet is one of the newest games to be released from Net Entertainment and ...
Software:
NetEnt
Reels:
5
Paylines:
20
RTP:
96%
Volatility:
Medium