10X Rewind slot is a 4ThePlayer online slot with 6 reels, 4 rows, and 20,000x maximum payouts. The game came out on Yggdrasil Gaming’s platform in September 2021, delighting both Yggdrasil and 4ThePlayer fans worldwide. As you can see, the game boasts a uniquely 4ThePlayer-ish stamp – the name starts with a number, has great payouts, and features an insanely potent new mechanic developed specifically for this game. What a way to make an entrance! We cannot wait to introduce you to yet another future smash hit from one of our favourite game providers. Sit tight, and enjoy our 4ThePlayer 10X Rewind slot review.

The superb 10X Rewind is all about futuristic times and time travel. The word ‘rewind’ hints at the game getting players back in time – hypothetically and literally. Time travel is the theme, so there are lots of visual representatives of various periods of history, but you also have the option to rewind time and repeat previous wins. The game features an increasing multiplier, along with the titular 10X Rewind feature and 10X Rewind Win Spins. You’ll learn everything about them in our 4ThePlayer 10X Rewind slot review.

As for the technicalities, the game uses a splendid 10X Rewind mechanic that allows you to move in time. This gives you great potential – the maximum win payout is 20,000x the stake – but also high risk. With high volatility and 96.47% RTP, 10X Rewind online slot is an absolute gem of a slot available at all Yggdrasil Gaming casinos. To play 10X Rewind for real money, you will have to pay a sum ranging from €0.10 to €20. Let’s see what else is hiding in this futuristic online slot machine. 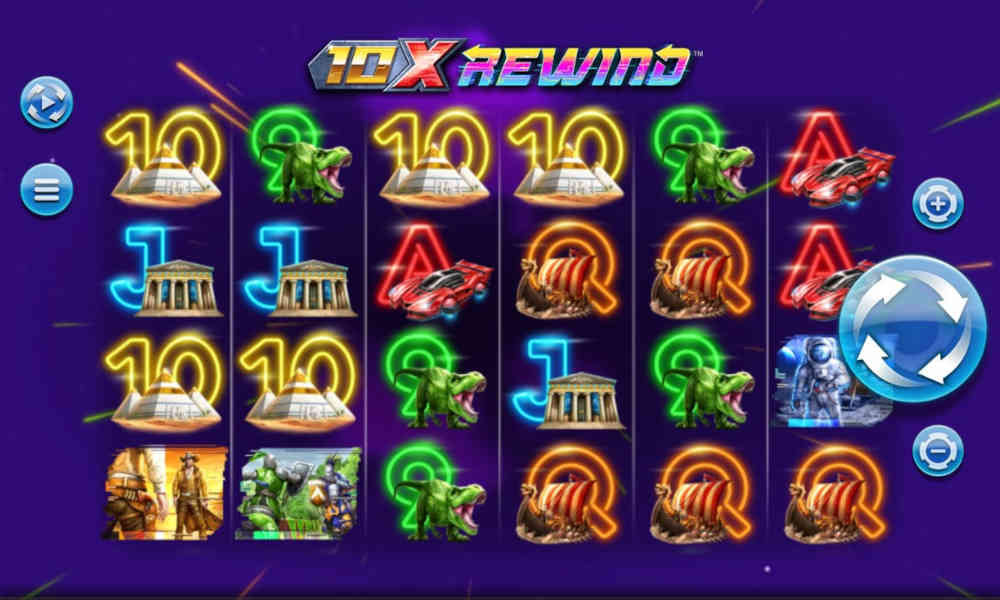 Wow, another 4ThePlayer slot is in town! You all know what that means, players – another impressive show by one of the most successful Yggdrasil partners are ready. We cannot explain how excited we get every time we hear about a new release from 4ThePlayer. The reason is simple: we know it will be a blast well worthy of our attention and energy. Hence, when we first entered 10X Rewind, we braced ourselves for a superb gambling adventure, but nothing could prepare us for what we actually found there.

10X Rewind is a time travel slot rocking some pretty synthwave elements. The colour palette and the design scream 1980s, but the focus is on the futuristic side rather than the actual disco era. With massive Back to the Future vibes, the new 4ThePlayer slot is a work of art that combines cutting-edge tech with eye-pleasing visuals. And we are not exaggerating; we are simply trying to describe the release, believe us. 4ThePlayer takes players on a millennia-spanning adventure where you get to visit the pyramids, dinosaurs, flying cars, and the greatest empires of human civilisation. Six icons represent the low-pay set. They include card royals 9-A, but each tile has an additional element representing an evolutionary milestone. Dinosaurs, the pyramids, the Pantheon, Viking ships, trains and flying cars accompany the royals. The highest-paying icons are gladiators, medieval knights, cowboys, and astronauts – all champions in their field of expertise if you ask us! The game also uses a Win Spins Scatter and a Wild.

To play the 10X Rewind slot for real money, you will have to prepare a bet between €0.10 and €20. The game is highly volatile and uses 96.47% RTP, so dry spells aren’t infrequent. The greatest win in the game is 20,000x the stake, achieved on one of 4,096 winning ways. Moreover, as 4ThePlayer is a mobile-first game producer, the slot fits all possible devices. Thanks to the Big Reel Portrait mode, you won’t be able to tell apart the experiences of playing on mobile and desktop. Play the game here for free, or head directly to a Yggdrasil Gaming casino for real money playtime.

The beauty of 10X Rewind is that it practices what it preaches. So, it’s not only about time travel, but it also allows you to go back in time. Here are the game features for the 4ThePlayer 10X Rewind slot.

Two features on paper bring three new boosters that you can use to change the past. Are you dissatisfied with how your previous spins turned out? Don’t worry, 4ThePlayer will let you go back in time and potentially change the past!

Use Rewind Time and Win Spin boosters to replay the past and score bigger payouts than before. Of course, you might see a dinosaur or the making of pyramids along the way, which only adds to the thrill.

We love the exciting 10X Rewind slot by 4ThePlayer because it’s not only smoke and mirrors. The theme is reflected in the design and the game engine – you literally get to go back in time. And we don’t know about you, but we find that impressive. So play 10X Rewind online slot for real money at the best Yggdrasil casinos right away.

WHERE TO PLAY 10X REWIND FOR REAL MONEY:

Players, we need your help with how we should to rank and rate these reviewed casino games. You can help us by rating this game, and if you really enjoyed playing 10X Rewind. You can also share it with your friends on Facebook, Twitter and via email. For all freeplay games, if your free credits run out, simply just refresh the page and your balance will be restored.

6 Wild Sharks
You can tailor your experience to your tastes here, and that includes betting limits ...
Software:
4ThePlayer
Reels:
6
Paylines:
4,096 Ways to Win
RTP:
96.5%
Volatility:
High