Mythology is a popular theme for video slots, as we have seen from dozens of slots glorifying different mythologies. From Egypt to Scandinavian folktales, the market has it all. But here is the thing – players always want innovation. And who better to deliver that freshness than the young 4ThePlayer? The company announced 2 Gods Zeus Vs Thor video slot, which is set to depict the showdown of two of the most powerful gods across all universes.

If you want to jump right into the action, make sure to use all features in the game. 4ThePlayer gifted us with a chance to boost the bankroll with Win Spins in the Free Spins mode. The innovative provider also added Win Multipliers that apply to all Win Spins in your triggered feature. And that’s not the end of it – you can retrigger the feature if you are lucky enough. There are no limits for the number of re-activations of the Win Spins. And we don’t doubt you’ll love the revolutionary Dual Spin mechanics!

This epic clash comes in the shape of a 5×4 grid that offers you 2,048 ways to win. In terms of RTP, the game clocks in 96.5%, which is quite the standard. Naturally, it’s a highly volatile slot that is perfect for risk-loving players. Bets in 2 Gods Zeus Vs Thor start from €0.10 and go as high as €20 per spin. That might not be such a perfect fit for high rollers, but there’s potential in the game, nevertheless. 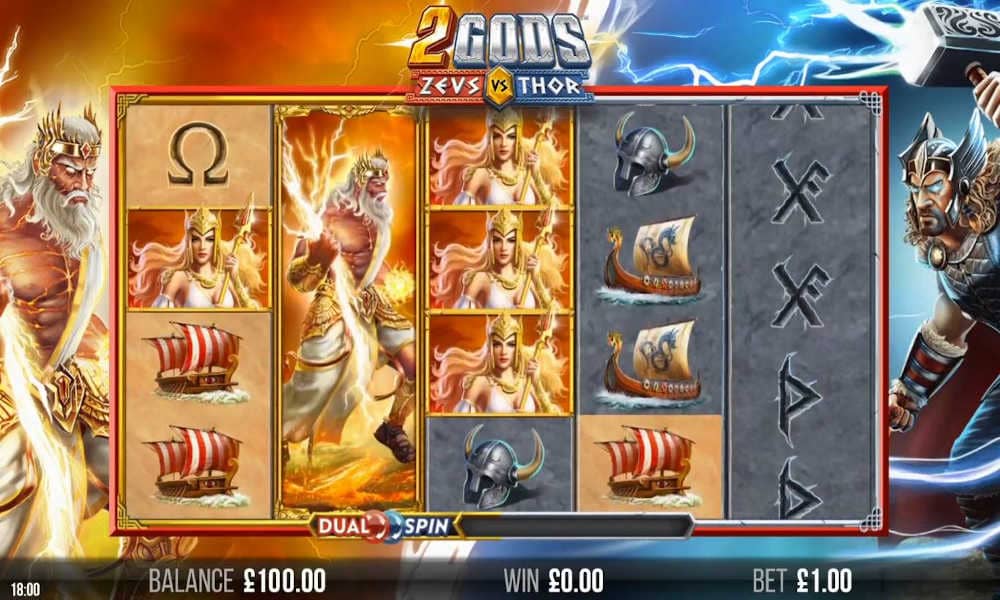 HOW TO PLAY 2 Gods Zeus Vs Thor?

The 2 Gods Zeus Vs Thor video slot sees two mighty gods fight for dominance on the five reels. Your job entails spinning the reels, and you also get to choose which spin you want. Let us translate that: 4ThePlayer introduced Dual Spin mechanics here. That means that, with each spin, you get to choose which side you are on. Now, choosing sides might not be a prudent move in real life, but here it is certainly advantageous. If you spin the Norse side and the icons on the reels belong to the identical batch, you get double the reward. It is important to note that the company divided the reels into two sides too. The red side belongs to the Greeks, while the colour blue represents Norse gods. This is a pay-both-ways slot, and Greeks pay left to right, while blue wins pay right to left.

The icons are split into two categories – Greek and Norse. They are colour-coded, and each contains the same number of tiles. Three low-pay icons include letters and runes. There are also legendary creatures, female deities, ships, and helms. As you can guess, the deities have the highest worth in the game, on both sides. Because 4ThePlayer decided to install the Dual Spins mechanics, volatility climbed to the top of the scale. 2 Gods Zeus Vs Thor comes equipped with 96.5% RTP rate that promises high payouts in the base game.

This is a pay-both-ways slot, and Greeks pay left to right, while blue wins pay right to left. Given that the total number of winning ways is 2,048, it essentially means that the red side gives you 1,024 ways to win, just like the blue one. Before you start spinning the reels, make sure to check the betting range. The minimum bet requirement is €0.10, while the max bet is €20. 2 Gods Zeus Vs Thor allows you to win up to 15,630x the stake.

The game brings forth a massive clash of mythological titans, so it was only appropriate to include some hefty features. Let’s have a look at what’s hiding in 2 Gods Zeus Vs Thor slot.

Myths and folktales are still an appealing topic in the entertainment industry. Perhaps the best place to explore various legends is the video slots that companies produce for online casinos. And 4ThePlayer quickly rose to prominence in such a competitive market!

2 Gods Zeus Vs Thor is a visually pleasing 5-reel game that offers a plethora of possibilities. You get to pick a side in this epic battle but choose wisely. Your decision can lead you to mediocre wins, or great 2x double payouts.

Speaking of double payouts, the game allows you to use the Dual Spin mechanics that power the 2,048 ways to win. This epic Greek-Norse battle offers high volatility, 96.5% RTP, and 15,630x wins to the players. Yggdrasil Gaming, the founder of YGS Master program, powers this exciting slot.

WHERE TO PLAY 2 GODS ZEUS VS THOR FOR REAL MONEY:

Players, we need your help with how we should to rank and rate these reviewed casino games. You can help us by rating this game, and if you really enjoyed playing 2 Gods Zeus Vs Thor. You can also share it with your friends on Facebook, Twitter and via email. For all freeplay games, if your free credits run out, simply just refresh the page and your balance will be restored.

PLAY 2 GODS ZEUS VS THOR AT THESE TOP RECOMMENDED CASINOS