The time for heroes has come! Age of Asgard is the latest gem to come from Yggdrasil’s creative kitchen. The video slot boasts an impeccable Nordic theme and an intriguing reel setup. There are two sets of reels – each with 5 reels and 3 rows. If that isn’t enough to pique your interest, Yggdrasil also incorporated 40 active paylines. And there’s more!

The main features are designed to convey the mightiness of the Nordic warriors. Yggdrasil incorporated everything the fans love: Free Spins, Respins, and mighty Wilds. Win potent Free Spins, and you might also get an additional portion of Respins. Let’s not forget Expanding Wilds! They are there to boost your wins but don’t worry if you encounter a near-miss. They can tip over and expand to cover the entire reel.

In terms of gameplay, the usual Yggdrasil rule applies – entertainment on every spin. You have to work for bigger wins, sure, but you will have great fun whilst doing so. The RTP (96.3%) and medium volatility enable good winning chances, so you do not have to worry about payouts. As for the said payouts, the maximum amount that you can obtain peaks at 2,444x the stake. Not bad, right? All that is possible with bets that range from €0.20 to €200 on all devices. 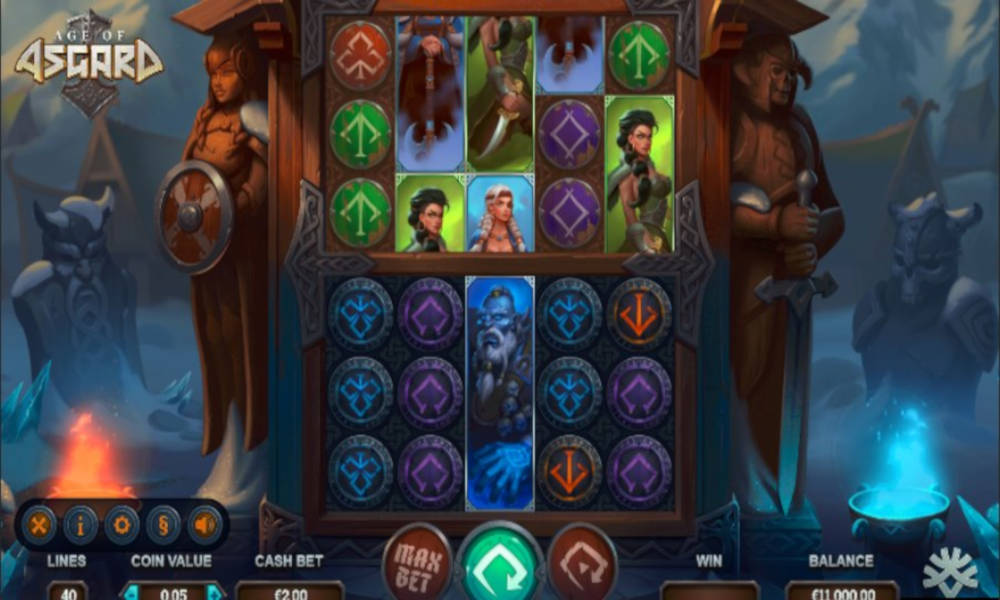 HOW TO PLAY Age of Asgard?

Age of Asgard is a visual masterpiece. Every bit and piece of design perfectly embodies the forceful spirit of ancient Norse people. The backdrop features a village deep in the mountains covered with snow. The reels are positioned on a wooden hut guarded by two Viking statues. Fires are burning right in front of the statues – one red and one blue – hinting the true nature of the game. As all ancient legends, this game tells the story of good and evil – and the eternal clash of the two. The soundtrack sounds like it was taken from an episode of Vikings – what else would you expect from Yggdrasil?

With a theme that is so close to the developer, we weren’t surprised to find exquisite symbolism on the reels as well. As we already mentioned, the reels are split in half, or rather, there are two different sets of 5×3 grids. Both are filled with similar symbols, but the catch is in the perspective. The lower grid has tiles that are mirror images of the ones found in the upper grid. They also boast darker hues – because they represent the underworld in a sense. The lower grid is the place you can stumble upon zombies and dragons. Both grids have the same number of tiles split between high-value and low-value icons. The lower icon sets are a collection of four card suits, present on both grids. In terms of high-value tiles, there are a few differences. Dragons, zombies, and giants are lurking in the lower grid, while the top grid is guarded by three mighty female warriors. The most rewarding is the Red Warrior, which pays 6x your bet if you collect 5 matching tiles on a payline.

The technical background of this slot entails medium volatility and a 96.3% RTP. That essentially means that payouts, although sporadic, do make up for the patience you invested in the game. Each reel set has 20 paylines, so their combinations give 40 paylines for the Age of Asgard. The minimum bet amount is €0.20, while the max is capped at €200. The Age of Asgard is perfect for any device of your choice.

As Yggdrasil knows too well its customers, it made sure to include several interesting features to keep the gamers occupied. Here is what you can find in the Age of Asgard:

If you were looking for a masterpiece, Yggdrasil has fulfilled your wish. It’s in their nature, to be honest, that propensity towards creating brilliant slot games. Our team at BestCasinos has been following the company closely since day one and the progress we’ve noticed on their slot games is nothing short of spectacular.

The Age of Asgard is highly entertaining, filled with action, and rewarding. The ancient Nordic theme captivates from the get-go, while the technical background reflects the potency of this slot. Medium volatility, 96.3% RTP, 40 paylines and two 5×3 reel sets together make up Age of Asgard.

If you dare, you can enter the game for only €0.20 per round. High rollers that like to go big can invest as high as €200 for a single spin. The game is found in all Yggdrasil casinos, and it’s a perfect fit for all devices.

WHERE TO PLAY AGE OF ASGARD FOR REAL MONEY:

Players, we need your help with how we should to rank and rate these reviewed casino games. You can help us by rating this game, and if you really enjoyed playing Age of Asgard. You can also share it with your friends on Facebook, Twitter and via email. For all freeplay games, if your free credits run out, simply just refresh the page and your balance will be restored.

PLAY AGE OF ASGARD AT THESE TOP RECOMMENDED CASINOS