Agent of Hearts slot by Play’n GO is an online cluster pay slot with 96.25% RTP and 5,262x payouts. It’s the third instalment in the Rabbit Hole Riches slot series. Thematically speaking, Agent of Hearts draws numerous parallels and inserts symbols from Alice in Wonderland. Much like its predecessors, it boasts immaculate art and visuals, along with great potential. If you want to play the Agent of Hearts slot for real money, you’ll find top Play’n GO casinos here at Best Casinos.

In terms of features, Agent of Hearts has several boosters you can use throughout the game. Those include four Agents (of heart) – Cupcake Splat, Smokin’ Phat, Grinning Cat, and the Mad Hat. Each adds a layer of excitement to the game, but we are certain you’ll love the Queen’s Heart Free Spins the most. The key to Queen’s Heart is the collection of three Scatters.

The technical aspect of the game includes high variance, which means infrequent and yet bigger wins. The game’s max payout potential does not exceed 5,262x the stake, which is a reasonable slot payout. The game is built for fun, so medium rollers will have the best experience. It’s not a high roller slot because it does not exactly produce majestic wins – but it’s certainly fun to try. You can play the Agent of Hearts slot online at all Play’n GO casinos. Keep reading our review to learn more. 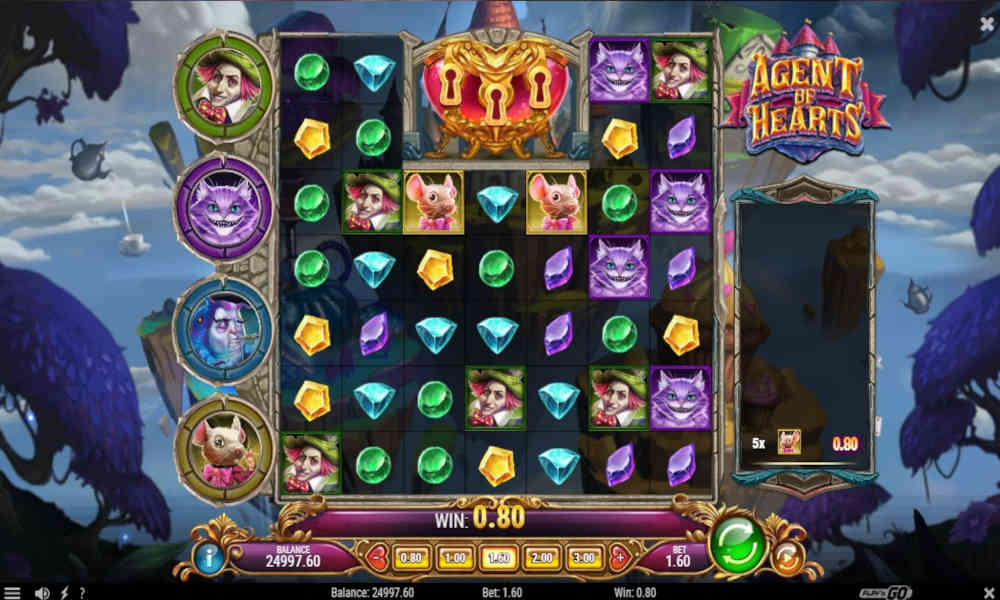 HOW TO PLAY Agent of Hearts?

Alice in Wonderland has been inspiring artists worldwide for decades. The movies, especially the newer ones with immaculate visuals, have charmed the audience across the globe. Moreover, the theme is an inexhaustible source of material, which means Play’n GO was more than smart to take it up. But Agent of Hearts is not the first slot with this theme in Play’n GO’s opus. There have been two previous slots, the Rabbit Hole Riches and the Court of Hearts. Generally speaking, the games are part of the same series, but each is a unique release on its own.

The opening line you see at the Play’n GO official page is “Never lose your head in a mission for the heart”. Daring words and adequate as they hint at the adventure you’ll enjoy once the game starts. As a cluster pay slot, the game relies on a heavy 7×7 grid that’s missing 6 tiles on the grid. To win, you need to form clusters that contain at least 5 symbols. You have a Wild that can replace paying tiles to make the clusters.

Speaking of symbols, the set includes four gems that pay low money and four high-paying Wonderland characters. The Mad Hatter, The Cheshire Cat, Caterpillar, and the Dormouse represent the character icons. The highest you can win from the symbols is 1,000x the stake, and that’s if you get a 15+ cluster of premiums.

The game is highly volatile, so beware of frequent dry spins. Dry spins are frequent, but rare bigger wins can intercept them. In addition, the Agent of Hearts slot includes a 96.25% RTP. To play the slot, you can wager a sum that’s between £0.20 and £100.

The story’s premise happening in Agent of Hearts is that a mysterious thief stole the Keys to the Queen’s Heart. The Safe where the Heart was kept in is positioned on the grid, and your task is to find them. Here is what you can use to recover them.

Play’n GO made sure to include various features, including a Random Hearts Wild if you have a dry spell. You get four main Agent features in the base game, but once you step into Free Spins, they are all activated. There’s also a Mega Wild to boost winning chances.

The game pays 5,262x the stake, which is decent if you compare it to other slots. However, our favourite moment is the big payout for 15+ premium clusters – you might get 1,000x the stake. Play Agent of Hearts slot for real money on any device at Play’n GO casinos.

WHERE TO PLAY AGENT OF HEARTS FOR REAL MONEY:

Players, we need your help with how we should to rank and rate these reviewed casino games. You can help us by rating this game, and if you really enjoyed playing Agent of Hearts. You can also share it with your friends on Facebook, Twitter and via email. For all freeplay games, if your free credits run out, simply just refresh the page and your balance will be restored.

PLAY AGENT OF HEARTS AT THESE TOP RECOMMENDED CASINOS

Demon
Play’n Go has joined the club of providers that created some of the most hardcore ...
Software:
Play'n Go
Reels:
5
Paylines:
30
RTP:
91.50%
Volatility:
High

House of Doom
House of Doom slot game is a proud product of the partnership between the omni-channel ...
Software:
Play'n Go
Reels:
5
Paylines:
10
RTP:
96.11%
Volatility:
High