Alchemy as a philosophical motif has been fascinating the generations of scientist and it’s a subject which also found its way into the online gaming arena thanks to the innovative team behind Yggdrasil Gaming. The 5 reel and 30+30 payline slot game called Alchymedes will help you transmute base metals into gold by paying both ways and thanks to some rather exciting features.

Creators of the exciting Alchymedes slot are one of the biggest up-and-coming names in the industry and arguably the most innovative team on the market today. This particular 2017 title stands as a huge argument to such a claim.

Alchymedes does not boast commonly known special and bonus features but latches on a highly engaging gameplay which includes no less than 15,000 wild patterns, 5x multipliers, leveling up playing mode and overall gamified gameplay bound to keep you entertained for hours. 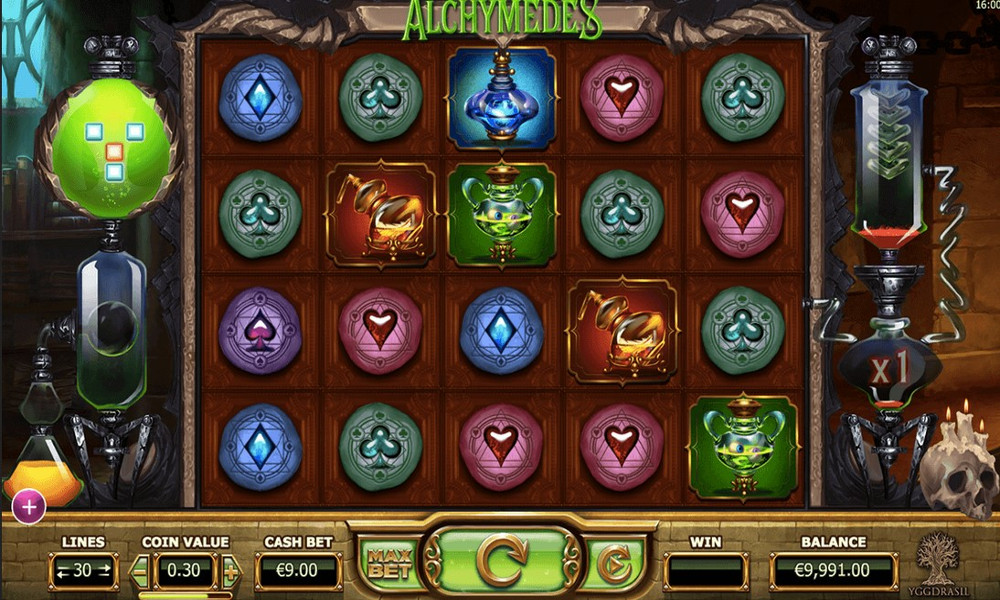 HOW TO PLAY Alchymedes?

The first thing you’ll think about once you launch the Alchymedes slot game is that there is so much going on around the playing screen. You are taken into a scientist’s laboratory with different kinds of test tubes splashed on either side of the playing grid.

The 5 reel set comes with four rows and a special 30+30 line system which pays both ways. Game controls are situated unobtrusively below the reels and you are advised to go through them and set up your own pace by choosing a cash bet which starts at €0.30 and goes up to €60 making this game available for a wide audinece.

Alchymedes also comes with a Max Bet button to help you move up faster and an autoplay button which sets the action in automated motion, allowing you to sit back and relax. The aim of the game is obvious – you need to land at least three matching symbols from either left or right side.

Symbols on the reels include different kinds of potion bottles and some rather astral projections of classic playing card suits – all four of them.

As said above, Yggdrasil Gaming made sure to create as gamified a slot as possible with their Alchymedes gem. There are no classic bonus features in this games – no free spins triggered by a certain number of scatters – but that does not take anything away from the game’s allure. Quite the contrary.

Completing Levels: as in a genuine computer game, players are able to complete levels with Alhymedes. Each line win in the game is marked with gold and you’re tasked by marking all 20 slot positions with gold to complete a level. Once you successfuly complete a level, you will be rewarded by a different Wild Pattern.

Wild Patterns: brace yourselves – there are more than 15,000 wild patterns in the game. The pattern is drawn at the beginning of each game level and will remain on the grid until you’ve moved on to the next level.

Level Competition Multiplier: this particular feature is a great way to finish off a level when a multiplier in added to the last win. Each new level will begin with a 1x multiplier which will increase randomly during each spin – going up to 5x multiplier.

The Alchemyst’s Scale: Everytime a level ends, the scale will appear to present you with a simple choice. You can either add more green wild potions or red multiplier potions to the combination. This particular gamified feature is a great way to boost your wild pattern and multiplier potential.

Random Bonus Feature: the most common feature of them all occurs randomly at the beginning of a new level when you will be presented with a choice of six different features. You can either get 100 – 2,000 coins paid at the end of the level, or grab a 2x or 3x starting multiplier. Alternately, a level competition multiplier is also there to increase your every spin, whereas you can also get 1 or 2 extra wild pattern positions.

Reading through all the above can be misleading but you’d be foolish to think Alchymedes is a complicated slot game. If elaborate graphics and intricate visuals would make you feel that way then we’re sorry you got misguided by Yggdrasil Gaming’s – almost alchemic – search for perfection.

This 5 reel and 60 payline slot game – which mind-blowingly pays both ways – is truly a piece of art in every sense of the word. Alchymedes deals with magic in the most pragmatic way possible, helping you mix different potions for some potentially lucrative payouts.

A plethora of highly engaging features screams innovation from the outset and the combination of multipliers and wild patterns boosting your win is just the beginning. This medium variance slot definitely is a game you should try as it can bring you big fat wins off of the huge multipliers in there.

WHERE TO PLAY ALCHYMEDES FOR REAL MONEY:

Players, we need your help with how we should to rank and rate these reviewed casino games. You can help us by rating this game, and if you really enjoyed playing Alchymedes. You can also share it with your friends on Facebook, Twitter and via email. For all freeplay games, if your free credits run out, simply just refresh the page and your balance will be restored.