Book of Souls online slot is a major leap forward compared to GiG Games debut Wild Reels and its classic disco set. This time out, the players are taken away from the comfort of the dance floor and pushed into the Mayan wilderness where they join our action hero Lara Jones in her quest for the ancient book.

This 5 reel and 10 payline slot game is a classic adventure presentation fitted into a neatly designed gameplay and topped by a couple of highly engaging features that could possibly bring a whopping hit of 500,000 coins.

With an RTP of 96.90%, this medium volatility slot game will give you frequent rewards and keep you on the edge of your seat throughout, as you help Lara fight her way through the perilous jungle. 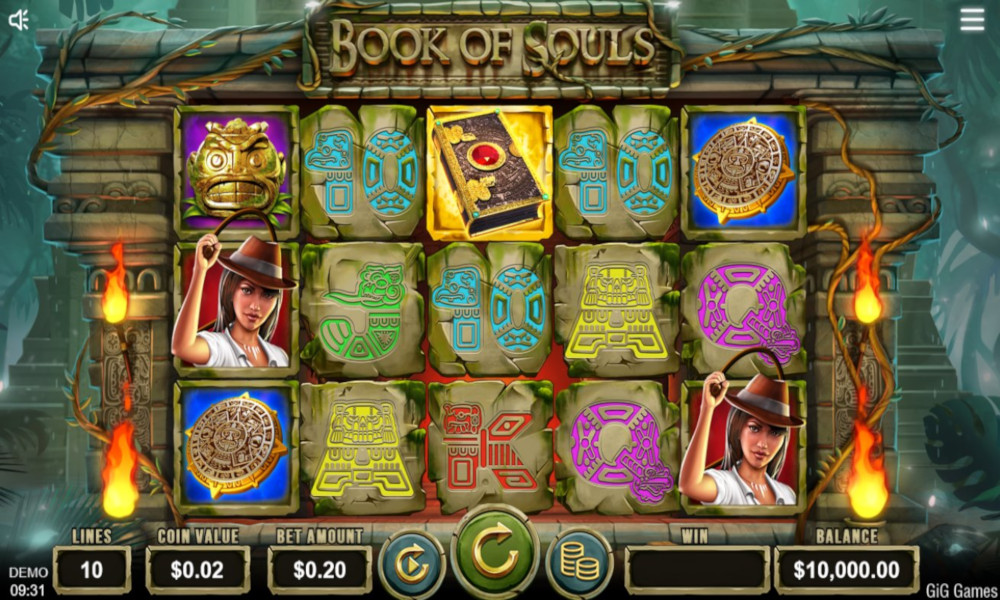 HOW TO PLAY Book of Souls?

GiG takes up into the jungles of Guatemala where an adventurous explorer Lara Jones is looking to recover a long-lost ancient Book of Souls. Admittedly, it’s not the most imaginative concept from this relatively young game developer.

The first question that pops into our head is whether Lara Jones is a love child of famous Lara Croft and Indiana Jones? We don’t mind being called immature due to it. Anyhow, with torches burning on both sides of the reel grid and water dripping on the site it, there is that good-old jungle feel to this game which is more than enough to draw you straight in.

Symbols are packed on the entrance of a mythical pyramid where classic play card icons are decoratively displayed in form of tribal insignia, complementing the theme well. Lara and her Arch Nemesis – and that’s exactly his name here – are the two high denominations, while the royals  are two ancient artifacts of gold.

The Book of Souls is the game’s Scatter and Wild while there is also the Snake Wild here, playing a particularly ‘wild’ role in the base game. More on it further below.

Book of Souls pays for at least three matching symbols on a payline from left to right. GiG games fitted this title with all elementary game controls and you are well advises to adjust the gameplay prior to spinning the reels. Bet amounts go from €0.10 up to €100, making this game affordable to all types of gamers.

Book of Souls is not exactly the most intricate game with an elaborate gameplay and features bursting with innovation. You should bear in mind, however, that GiG Games is just making its baby steps into the game development industry and that efforts should be complimented. As for their Book of Souls slot game, it has got all you need actually – Wilds and Free Spins.

Snake Spins – this feature will be triggered on random in the base game. It’s a lively feature and a visually attractive one – at least it will be for the animal lovers – with animated snakes emerging onto the screen. At this point, anything from 3 to 10 special Snake Wilds will appear on the reels to help you create hefty combinations.

Free Spins – Acting as both Wild and Scatter, the Book of Souls symbol is pretty special. It will substitute for all symbols on the reels to help you generate lucrative payouts, while it will have a special role to play awarding you 10 free spins as soon as you manage to land at least three of them on the screen. Before the Free Spins start, one of the regular nine symbols will be chosen as the Bonus symbol. These Bonus items will expand vertically to fill entire reels and boost your chances of winning during this special feature. The best thing about Free Spins is the fact they can be retriggered for further ten rounds.

Book of Souls is an adventure-themed slot game with a genuine question of main characters identity. This possibly long lost child of Lara Croft and Indiana Jones is now a heroine in her own right, fighting to recover a long lost mythical book.

Five reels and 10 paylines offer plenty of entertainment thanks to regular Wilds, Snake Wilds and Free Spins with expandable Bonus symbols – all more than enough to generate maximum winnings capped at whopping 500,000 coins.

This medium volatility game will reward you with frequent wins on the 96.9% RTP and keep you close to your screen – regardless of the device. It runs smoothly both on the desktop and mobile so you can play Book of Souls wherever you go.

WHERE TO PLAY BOOK OF SOULS FOR REAL MONEY:

Players, we need your help with how we should to rank and rate these reviewed casino games. You can help us by rating this game, and if you really enjoyed playing Book of Souls. You can also share it with your friends on Facebook, Twitter and via email. For all freeplay games, if your free credits run out, simply just refresh the page and your balance will be restored.

PLAY BOOK OF SOULS AT THESE TOP RECOMMENDED CASINOS

TRY THESE OTHER GiG Games GAMES