Brave Cat is an exciting video slot coming from the creative kitchen of EGT Interactive. This cat-loving title is inspired by the famed Puss in Boots and its well-documented adventures that have been one of the most exploited light motifs in popular culture.

With its 5 reels, 40 paylines and a wide range of available bets per spin, Brave Cat is sure to become a popular choice for a wide range of slot players, starting from the most enthusiastic beginners to hard core high rollers. EGT made sure to pack this game with exciting features, some of which are three different Scatter symbols, a Respin feature, Wild credits and up to 100 free spins whereas the progressive jackpot is the ultimate prize bound to keep you glued to the screen. 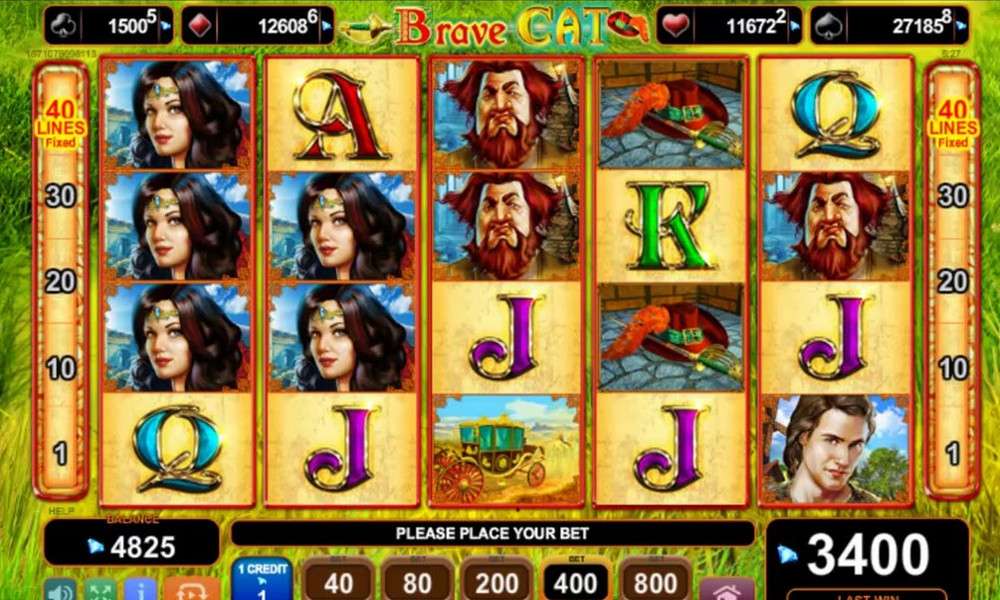 HOW TO PLAY Brave Cat?

With the launch of a playing screen the players will be urged to select their sin bets.

This EGT title offers five different levels of bets which start at 40 credits, move up to 80, 200, 400 and finish with 800. In terms of money for those who are planning to hit the reels for real, €0.40 is the minimum amount you’ll invest per single spin, whereas the top you’ll fork out is €8.

A simple tap on any of five bet categories will send the reels flying and have you hoping for at least three matching symbols in a payline which is the minimum requirement for a winning combination.

Following each winning spin lower than 1,400 credits, the Brave Cat slot will present its players with a Gamble option. You’ll be required to choose between Red and Black colour of a hidden card. A successful pick will double up the amount of your win.

Brave Cat comes with a range of colourful characters. The low paying ones are depicted as classic playing card symbols J, Q, K and A, whereas the most interesting symbols and a highest rewarding one for that matter is the Cat.

Wild –  the Brave Cat is also a Wild symbol which substitutes for all symbols in the game except for the scatter. Five Cat symbols in a payline offers a lucrative payout worth 200,000 coins.

Paired Scatter – a King and a Castle combined together make three different versions of a Scatter. With a symbol split in half appearing as a Paired Castle, Paired King or a Mixed Scatter, this symbol appears in the base game only and are counted as the featured symbols on them. This mixed symbols

Free Spins – Brave Cat offers up to 100 free spins in this highly popular special feature which is initiated once a player lands at least 5 Castle Scatters. There is a minimum of 6 free spins to be grabbed with Respin Feature. 4 Castle and 4 King symbols will give you 6 free spins, a Respin Feature and a Wild Credits Feature. The more Scatters you land on the reels, the more free spins you will be rewarded with.

Respin Feature – If one or more reels are entirely filled with Wilds symbols during the Free Spins feature, the reels holding the Wilds will be locked in their place whereas the other reels will be given a complimentary spin to further enhance your winning opportunities.

Wild Credits Feature – the Wild Credits feature will give players additional credits on all Wild symbols on the grid and even on those Wilds that are not part of a winning combination. The best thing about this feature is that it continues through a respin, when a coin prize will be attached to any wild appearing after it.

Four-Fold Progressive Jackpot – EGT has truly spiced things up with its Mystery Jackpot which consists of four levels, each of which is marked with a card suit. Mystery Jackpot bonus is triggered randomly on a winning spin when players will be shown 12 cards facing down. The players are then required to reveal three matching card suit symbols which ultimately activate the corresponding suit jackpot.

One of the latest EGT slot titles Brave Cat latches on a popular theme and an adventure story which defies time. It boasts a modern design and attractive animations which add to the overall visual element of the game.

In addition to being good on the eye, Brave Cat is an action-packed game which comes with a lucrative free spins feature.

With up to 100 free spins on offer with wild respins and wild credit prizes on top of them, Brave Cat is also a lucrative game which will make your playing time worthwhile.

WHERE TO PLAY BRAVE CAT FOR REAL MONEY:

Players, we need your help with how we should to rank and rate these reviewed casino games. You can help us by rating this game, and if you really enjoyed playing Brave Cat. You can also share it with your friends on Facebook, Twitter and via email. For all freeplay games, if your free credits run out, simply just refresh the page and your balance will be restored.

27 Wins
Eurogame Technology (EGT) will not give up on their tested model when it comes to ...
Software:
EGT
Reels:
3
Paylines:
27
RTP:
N/A
Volatility:
Low
VIEW ALL GAMES