One of the kick-starters of Euro Games Technology (EGT)’s series of slots with different combinations of words ‘Hot’ and ‘Burning’ in their titles, Burning Hot is a high volatility classic theme slot which comes with a top prize of 60,000 coins and a four-level mystery progressive jackpot.

This particular game is a generic video representation of a classic slot machine you’ll find in land-based casinos all around the globe. The elements involved make it a vintage fruit game with a gameplay that will appeal all old-school players.

With five reels and as many paying lines, Burning Hot slot is not exactly a game that will see you land frequent wins due to the limited number of winning combinations but the most patient players will definitely be handsomely rewarded for their efforts. 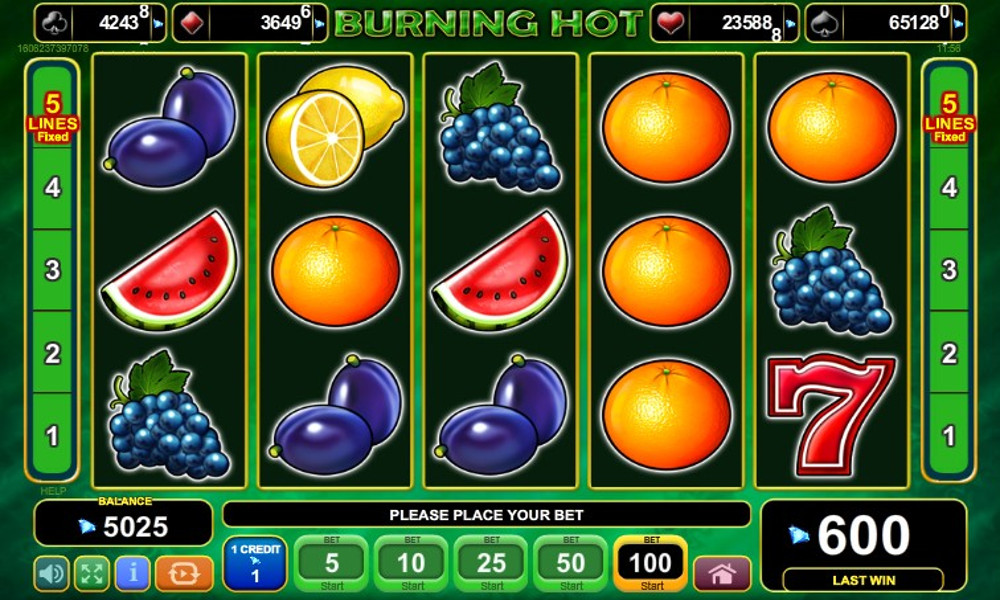 HOW TO PLAY Burning Hot?

With green colour dominating the visual appearance despite the night black background behind the symbols on the reels, Burning Hot is a nice looking slot.

On each side of the reels there is a payline meter which will prompt you to select the number of paying lines you wish to have active during your spins. Thrill seekers can start from not more than a single payline and move their way up to the total of 5.

Cleverly situated below the reels are other game controls. You are encouraged to also select the value you wish to invest per spin with 5, 10, 25, 50 and 100 coin betting values available to you. The moment you tap one of the betting options the reels will start spinning, which means they all act as a Spin button.

In addition to a generic visual appearance, EGT’s Burning Slot features a similar soundtrack which still go well with this fairly straightforward and simplistic gameplay. Lemons, Plumbs, Oranges, Cherries, Watermelons, Grapes, Bells and 7s are the game’s main symbols all of which pay in a combination of three on an active payline.

EGT slot games are known for their simplicity of action and Burning Hot is not much of a difference. Slot enthusiasts who are looking for an elaborate game plan should definitely look elsewhere as here they won’t be able to find any of the bonus features, such as free spins or multipliers.

Gamble – When it comes to slot games coming from EGT, the gamble option has almost become a standard feature. Players can gamble after any winning spin which has resulted in wins equal or less than 1,750 coins. It’s all about picking the right colour of hidden cards – up to 5 times – to potentially double your base game winnings. A wrong guess will see you leave without anything in your pocket.

Wild & Scatters – No it’s not a mistake, there indeed is more than one Scatter in this game. A purple star Scatter can appear anywhere on reels 1, 2 and 3 which makes it impossible to line five of those like any other symbol. It still can bring a significant payout worth 2,000 coins which can come quite handy in this high volatility slot.

Dollar sign Scatter will appear anywhere on the reels 1 through 5 to reward the top prize of 10,000 coins. It doesn’t, however, trigger any of the usual features such as Free Spins, which is one big flaw to this game.

Four leaf clover is the game’s Wild which replaces all symbols except from two Scattered symbols. The Wild appears on reels 2, 3 and 4 only but will expand to fill the entire reel when part of the winning combination. A full reel of four leaf clovers will naturally increase your winning potential and help you possibly create more significant wins on a single spin.

Jackpot Cards Progressive Jackpot – Most of the EGT titles we encountered thus far come with a tantalising four-level progressive jackpot feature that adds plenty of value to your playing time. This feature is built around four card suits with Spades being of the highest value.

This feature is activated at random, after any given winning spin when a set of 12 cards facing down will be presented in front of you. It’s your job to pick three matching suits in order to activate the corresponding jackpot. As you play, values of all four jackpots will be displayed above the reels just to give you an indication of what you can expect.

Euro Games Technology have built a distinctive style over the years and their games are easily recognised.

Catering to needs of players who love the classic casino experience, EGT mostly creates classic slot machine like games with gameplays that are not intended for the new generation of players hoping to get an elaborate gaming experience.

Burning Hot is a game that features fruit symbols which are accompanied by two Scatters – dollar sign and a purple star – while the four leaf clover is the Wild. Once it takes part in a winning combination it will expand to bring some excitement to the reels.

WHERE TO PLAY BURNING HOT FOR REAL MONEY:

Players, we need your help with how we should to rank and rate these reviewed casino games. You can help us by rating this game, and if you really enjoyed playing Burning Hot. You can also share it with your friends on Facebook, Twitter and via email. For all freeplay games, if your free credits run out, simply just refresh the page and your balance will be restored.