Calavera Crush is another slot coming from the Swedish software provider Yggdrasil Gaming. The game features the Day of the Dead theme and plays out on a 6×5 game panel. It comes with a maximum RTP of 96% and falls into the highly volatile slot category. You can play this title across any device from a minimum bet of €0.20 to a maximum bet of €100 per spin.

As we have mentioned, Calavera Crush draws inspiration from the famous Mexican holiday. If you are unfamiliar with the word Calavera, it refers to edible or decorative skulls. These skulls are usually made of sugar or clay used in the celebration of the Day of the Dead. When it comes to online slots featuring this theme, they can be boisterous and over-the-top. However, Yggdrasil approached this subject a bit differently. Although it captures the spirit of this holiday, it leans more towards restrained rather than extravagant.

If you are a fan of this Mexican holiday, or slots featuring the Day of the Dead theme, you might want to give this one a chance as well. We will provide all the info about this Yggdrasil slot, so stick around for our Calavera Crush slot review. 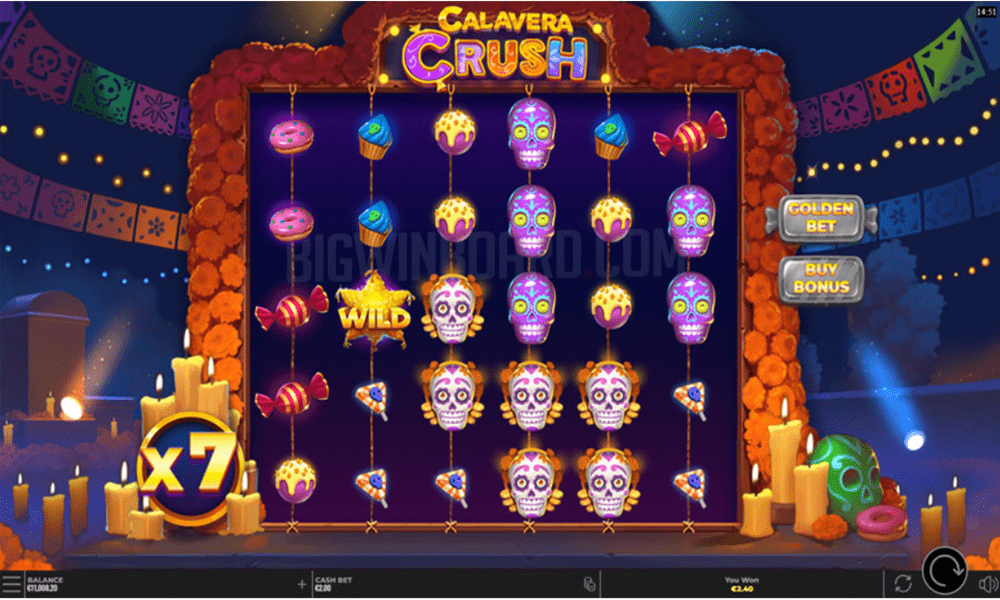 HOW TO PLAY Calavera Crush?

As we have mentioned, when it comes to the Day of Dead slots, Calavera Crush is one of the more laid-back examples. Starting with the soundtrack, you will notice it is rather loungey until the Mariachi start playing, making it a bit livelier. The visuals are top-notch, with a dark background and colourful symbols landing on the reels.

Calavera Crush brings the action on a 6-column, 5-row game grid, where wins are created with at least 8 matching symbols in view anywhere on the grid. Wins in both the base game and the bonus round trigger an avalanche feature. The feature will remove the winning tiles from the reels, letting symbols drop down to fill the empty spaces. This goes on until no more wins are created.

When it comes to maths, the Calavera Crush slot features a few different RTP settings, depending on the market. The most generous one is 96%, dropping to 94%, 90.0%, or 86%. If you wish to know which Yggdrasil slots feature the best RTP, you’ll find them here. Back to Calavera Crush – it is highly volatile with wins occurring at a frequency of 41%. You can join this fiesta for bets of €0.20 to €100 per spin. The max win potential of Calavera Crush is 5,000x the stake.

If you have a sweet tooth, you will be thrilled by the symbols in Calavera Crush. Candies are all over the reels, with lollipops, cupcakes, doughnuts, wrapped candy, and something dripped in cream appearing as the low pay symbols. As you might have already guessed, the premiums are the four Calaveras. Landing 8 of a kind will get you up to 10x the bet, while 12+ sized wins are worth up to 100x the stake.

When it comes to Calavera Crush special features, you will see there are a few that have the potential to really sweeten the deal.

Overall, Calavera Crush is a perfect game for casual players who are fans of scatter pays slot. The game offers added wilds, avalanches, and progressive multipliers in both the base game and in free spins. The heat is definitely turned up a notch in the free spins round where multipliers increase at a faster rate. Since they do not reset as well, players can crack open the pinata at this fiesta and walk away with wins of up to 5,000x the stake.

Before investing any money, make sure to try out the Calavera Crush demo game. That way you will be able to see if this online slot will suit your taste. If you like the gaming session this Mexican fiesta has to offer, do not waste time and head to your favourite Yggdrasil-powered casino for the celebration!

WHERE TO PLAY CALAVERA CRUSH FOR REAL MONEY:

Players, we need your help with how we should to rank and rate these reviewed casino games. You can help us by rating this game, and if you really enjoyed playing Calavera Crush. You can also share it with your friends on Facebook, Twitter and via email. For all freeplay games, if your free credits run out, simply just refresh the page and your balance will be restored.

Hades Gigablox
Yggdrasil Gaming was not kidding when they announced they have big plans for the ...
Software:
Yggdrasil
Reels:
6
Paylines:
50 Paylines
RTP:
96%
Volatility:
High