Quickspin Cash Truck slot is a 5-reel slot with 20 base paylines and 25,000x wins. The slot appeared in January 2022, making it the first Quickspin release of the year. And what a great way to start the new year! Cash Truck is a post-apocalyptic car chase where the goal is to win money – and you can win up to 25,000x. We are eager to show you around the game! Sit tight and let us show you what’s under the hood of this Cash Truck online slot.

Cash Truck is a post-apocalyptic adventure with a lot of potential. The point of the game lies in the truck full of cash speeding down the highway. The 5-reel adventure quickly picks up the pace and transforms into an intense chase as rows expand to 7 and thus boost paylines up to 1,024. The game feature that caught our eye is the Truck Raider Bonus, a bonus round with multiplier collection features and a plethora of winning opportunities. If you want, you can Buy Features without waiting for them to drop.

The game has a 96% RTP and high volatility. What does that mean for the players? For starters, it’s a highly temperamental game that does not yield wins often. However, a look at the game’s max payout of 25,000x reveals that such variance is very much justified. The base game offers 20 paylines, but that number jumps up with Expanded Grid rows. The game came to all Quickspin casinos on January 11th, 2022. Read our full Cash Truck slot review for more info and top Quickspin casinos. 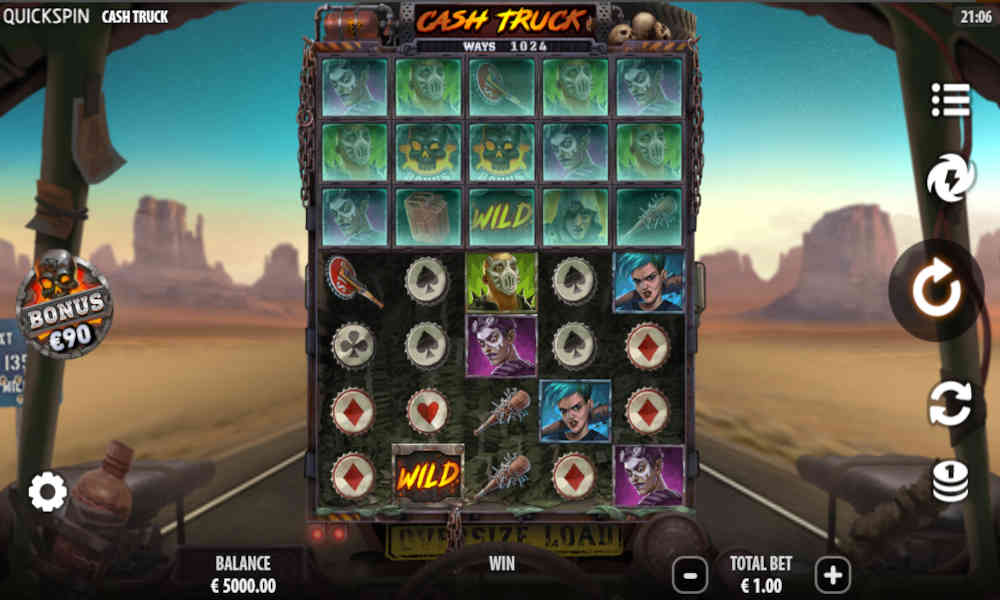 HOW TO PLAY Cash Truck?

With the first game teaser, Quickspin announced a fast car chase akin to The Fast and the Furious but after a catastrophic apocalypse. For some reason, a truck full of cash is speeding down the highway, possibly running away from someone. What to do? Don’t ask questions and protect the cash, of course! The game presents itself as a 5×7 grid perched on the back of a moving truck speeding down the highway. The screen also poses as the player’s POV where the goal is to stop the truck in front of you and get the cash. The symbols on the grid include low-pay card suits that look as if they’ve been painted on crown caps. Three high-pay symbols are weapons – a chainsaw invention made out of a stop sign, a baseball bet decorated with nails, and a jerrycan. The premiums include gang members who are likely stealing the cash.

The game starts with five reels and four rows. However, there are seven rows in total, and thanks to the Expanding Grid, you can quickly unlock the top three rows with consecutive wins. Adding additional symbols to use in the game gives you more winning ways as well. The highest number of paylines you get in this slot is 1,024 ways to win, and 20 is the base game fixed setting. The game’s max payout rate is 25,000x the stake.

What features come with Quickspin Cash Truck? So many of them, actually! Scroll down to see all slot boosters in the upcoming Cash Truck online slot.

Are you interested in fast cars, car chases, and trunks full of money? Look no further than the Quickspin Cash Truck slot. This supercharged post-apocalyptic car chase is fun, exciting, and most of all – highly rewarding.

The game uses a host of in-game features and boosters to paint an action-packed picture that’s certainly a good fit for all Quickspin fans. Chase the Truck Raider Bonus, scatters, and Second Chance features to win up to 25,000x!

To play the game, scroll up to play free online slot right here at BestCasinos. If you want to play for real money, pick one of our recommended Quickspin casinos and play Cash Truck slot online.

WHERE TO PLAY CASH TRUCK FOR REAL MONEY:

Players, we need your help with how we should to rank and rate these reviewed casino games. You can help us by rating this game, and if you really enjoyed playing Cash Truck. You can also share it with your friends on Facebook, Twitter and via email. For all freeplay games, if your free credits run out, simply just refresh the page and your balance will be restored.

Mayana
Mayana is a Mayan themed video slot game that was just released in 2017 and can be ...
Software:
Quickspin
Reels:
5
Paylines:
243 Ways to Win
RTP:
96.63%
Volatility:
Medium