Those looking for an adventure in the realm of Greek gods will find precisely that with Chronicles of Olympus X. It’s rife with features – X UP™, Expanding Wilds, Free Spins, Feature Buy, and Upsizer™. Upsizer is the brand-new game feature that Alchemy Gaming hopes will bring refreshment to the slot scene. In our sections below, we’ll talk more about this shiny new booster and what it brings to the table.

Meanwhile, we also had a look at the game’s background. Amid player-friendly technicalities are a 96.33% RTP and high volatility, which promise a good time while delivering top-notch gameplay. All players want to see a massive payout potential of 51,097x the stake, but be careful: the total hit frequency is 24.14%. The game uses a bet range of 0.30-21. The game’s official release date is October 26th, 2021. You can find it at all Microgaming online casinos, including our top recommendations. Read our full Chronicles of Olympus X slot review for additional information. 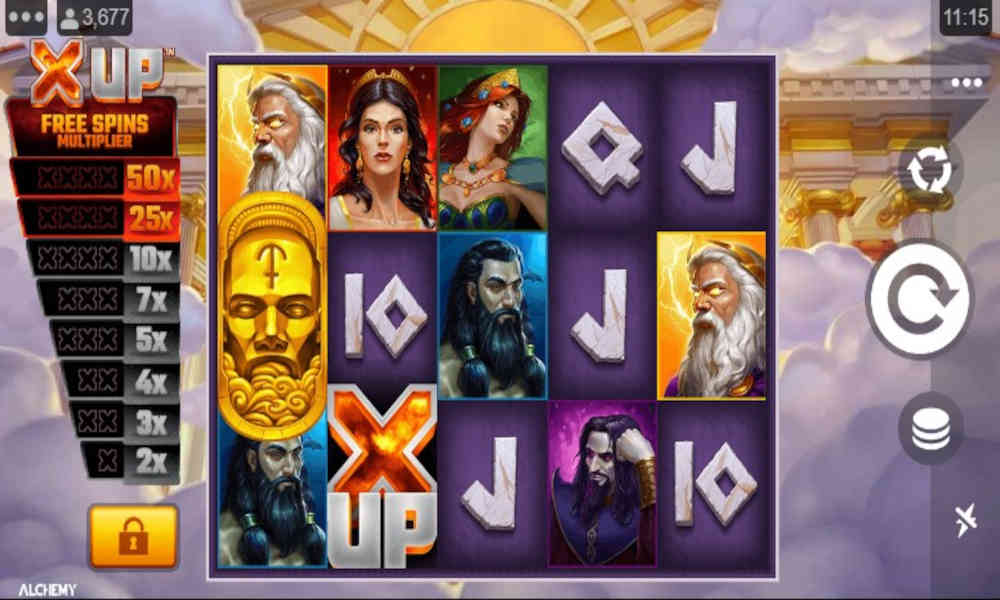 HOW TO PLAY Chronicles of Olympus X?

How do you approach a slot that packs so much potential into a small 5×3 frame? Well, you start at the beginning – with placing bets. Right off the bat, it’s important to note that Alchemy Gaming Chronicles of Olympus X offers a 0.30-21 bet range (available in several currencies). Placing a wager is quite easy, and once you do that, it’s time to spin. And spinning is the real delight, as the slot offers spinning reels with 243 ways to win. The winning part is not difficult either, but wins won’t often come due to the low hit rate (24.14%).

Furthermore, the game’s variance is high, so the Chronicles are, in fact, quite temperamental. But the RTP swings the ball a bit to your court, as it registers as 96.33%. Plus, we have to consider the astonishing 51,097x payout potential, which will act as a powerful attraction for players.

Chronicles of Olympus X slot mixes elements of fantasy and Greek mythology. The design team at Alchemy Gaming did a wonderful job designing the slot as the graphics are crisp, the soundtrack is excellent, and everything ties in together well. Several backdrops are available in the game – from the fiery pits to the clouds where gods reside. But regardless of the occasional change of scenery, the symbols remain the same at all times. Five card royals – 10, J, Q, K, and A, as well five gods occupy slot positions. Zeus is the most powerful icon in the collection, paying a decent sum for every 3,4 and 5 combos. Besides these gods, you also have a Scatter and a Wild. The Wild is the golden icon, while the X UP acts as the Scatter. We don’t want to risk spoiling the game for you, which is why we’ll leave the features for the next section.

All in all, it’s a decent game that definitely deserves your attention. Thanks to a plethora of features, awesome graphics and a very entertaining plot, you can have fun with Chronicles of Olympus X for hours on end. Just be careful of your money balance! Given its temperamental nature and high payout potential, it would be wise to manage your funds at a milder pace. You can play the game at all Microgaming casinos starting October 26th, 2021.

When it comes to features, there isn’t a thing Alchemy forgot to include. But, seriously, Chronicles of Olympus X has it all – just look at the features included in the slot.

The last thing we have to say about the Chronicles of Olympus X slot is that we loved it. We absolutely loved it! Alchemy Gaming took a sweet concept from Africa X UP and somehow made it better. The result is an astonishing game that uses X UP, Expanded Wilds, and Feature Buy to give you an amazing experience.

The game’s main feature is the X UP multiplier meter which yields bigger multipliers with more collected Scatters. This way, the game creates the best environment in the free spins where you get to spin and win more thanks to Expanding Wilds and Multipliers.

The game is available at all Microgaming casinos online. We’d like to invite you to check out our list of top recommended Microgaming casinos where you can play for real money. And let’s not forget – the game pays 51,097x the stake with a decent bet range.

WHERE TO PLAY CHRONICLES OF OLYMPUS X FOR REAL MONEY:

Players, we need your help with how we should to rank and rate these reviewed casino games. You can help us by rating this game, and if you really enjoyed playing Chronicles of Olympus X. You can also share it with your friends on Facebook, Twitter and via email. For all freeplay games, if your free credits run out, simply just refresh the page and your balance will be restored.

PLAY CHRONICLES OF OLYMPUS X AT THESE TOP RECOMMENDED CASINOS