Spectacular in every sense of that word – both from the visual and mechanical aspect – Coins of Egypt video slot available at NetEnt powered online casinos is a colossally entertaining and rewarding game at the same time.

This 5 reel and 3 row video slot comes with 20 paylines and boasts a brilliantly interactive gameplay filled with Egypt-themed symbols, Pharaoh Coin Wins and Free Spins that take you deep inside the pyramid in Indiana Jones style to help you unearth hidden treasures before the walls come crashing down.

Suspense, excitement and infinite entertainment are all attributes this slot game wholeheartedly deserves. It is a medium-variance product with an RTP worth 96.97% which is there to suggest winning combinations will come relatively frequently even though they might not necessarily be of value you’d expect them to be. 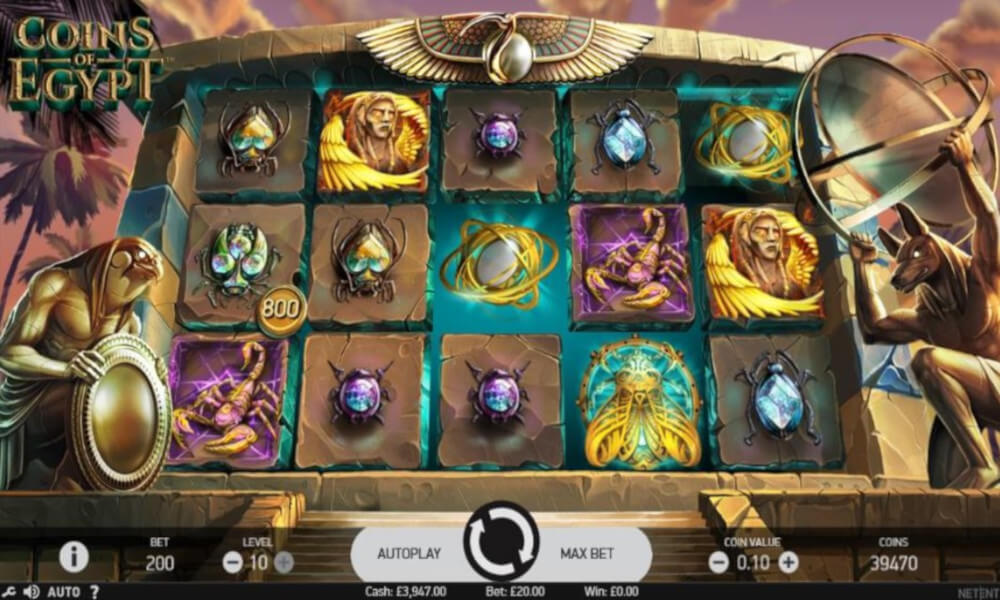 HOW TO PLAY Coins of Egypt?

Irrespective of which device you’re planning to use for playing Coins of Egypt, NetEnt has made sure to optimise the game fully to all possible devices.

This cross platform online slot will take you deep into the ancient world for wagers starting at €0.20 and up to €200 which makes Coins of Egypt a game for everyone. Talking about the coins and wagers, players are advised to set the game controls and adjust the setting to their own preference – whether it’s the coin size, the number of automated spins or simply the volume of the impressive soundtrack you’ll hear in the background.

Playing the Coin of Egypt slot is simple. The tap on a Spin button will set reels in motion which is followed by impressive graphical work, especially on a winning spin. You will need at least three matching symbols inside a payline in order to win.

Low-value symbols are represented as playing card suits transformed into beetles – which are a nice little visual detail. Higher denominations are ancient Egypt godly creatures, differently coloured and assigned different values (going up to 1,500 coins for five in a row).

If there’s one thing you can’t get wrong when it comes to NetEnt slot games is that these are all filled with engaging – and rewarding – features. Such is the case with Coins of Egypt as well. This game brings a different sentiment and a battle-like feeling into an Egyptian theme which is enough to send your pulse racing from the start. The features, however, are there to push it all up a notch.

Wild – this symbol is represented as a golden insect – beetle or a wasp of some kind it is hard to tell. It can substitute symbols to help you win more frequently but will not be able to replace Scatters, Chest Seal and Collect symbols. Nevertheless, this Wild symbol still remains one of the highest value in the game, rewarding you with 3,000 coins for five in a row.

Pharaoh Coins Win Feature – Pharaoh is actually the Collect symbol we mentioned earlier and it will appear only on reel 5. His function is self-explanatory as it is going to collect all coins visible during a spin and will add them to any winnings from that particular spin. One to three coins with values ranging from 2 to 15 times the bet will appear on reels 1, 2 and 3 every single spin to make this feature even more attractive.

Free Spins – this feature is the main attraction in the game, played once 3 Scatter symbols appear on reels 1, 3 and 5. Before the feature starts, all coins forming the winning combination on the triggering spin will be added to each of the three chests that will appear below the reels. During the spins, up to three coins may appear on reels 1, 2 and 3 and will be immediately added to the respective chests which are:

At the same time, added to the reels during the Free Spins will be 3 chest symbols corresponding to the chests (Ruby Eagle, Emerald Eagle, Golden Cat). Up to one treasure chest symbols can appear per free spin and your aim is to collect three of the same colour and picture in order to unlock the corresponding treasure chest and carry the coins home. Do note that while you play, the value of chests in terms of coins inside them will be displayed above the reels during the entire feature.

Coins of Egypt is arguably the best-looking game we’ve ever seen. Different tastes will open a debate but there is no arguing with the fact NetEnt deployed all of their expertise, knowledge, experience and skills to create as beautiful and engaging game as they could.

The bar is set high at the moment, not only with the impressive graphics and animation details, but also with a quite impressive gameplay. The Pharaoh Coin Win feature in the base game is only the start of it as Free Spins are where the all proper action goes on.

New symbols will appear to help you unlock one of three different treasure chest that you will fill with coins as you go along. The feature is set deep inside the pyramid and it’s bound to give you a scare or two once the stones start falling down from the sky.

WHERE TO PLAY COINS OF EGYPT FOR REAL MONEY:

Players, we need your help with how we should to rank and rate these reviewed casino games. You can help us by rating this game, and if you really enjoyed playing Coins of Egypt. You can also share it with your friends on Facebook, Twitter and via email. For all freeplay games, if your free credits run out, simply just refresh the page and your balance will be restored.

PLAY COINS OF EGYPT AT THESE TOP RECOMMENDED CASINOS

Wolf Cub
Wolf Cub is a themed video slot that has been created by Net Entertainment and the ...
Software:
NetEnt
Reels:
5
Paylines:
20
RTP:
96.34%
Volatility:
Medium

Jack Hammer 2
There are many different video slots that have a comic book theme, but with Jack ...
Software:
NetEnt
Reels:
5
Paylines:
99
RTP:
97.10%
Volatility:
Low
VIEW ALL GAMES