Donuts is a mouth-watering video slot created by Big Time Gaming (BTG). This is a cartoon styled game with bright colours and tasty decorations. It is powered by a 4×4 playing system with no less than 2,401 ways to win.

With a slight retro feel to it, Donuts is a finger licking title which packs a wide variety of scintillating features to make your playing time even sweeter. From Donut Boxes, Free Spins and a bonus feature carrying a multiplier up to 50x your bet, there is plenty to look for in this tasty delicacy.

Big Time Gaming’s Donuts slot is playable across all devices and platforms and is highly affordable with bets per spin starting at €0.05. The maximum you can invest for a spin is €12.50 whereas the jackpot has been capped at 100,000 coins. 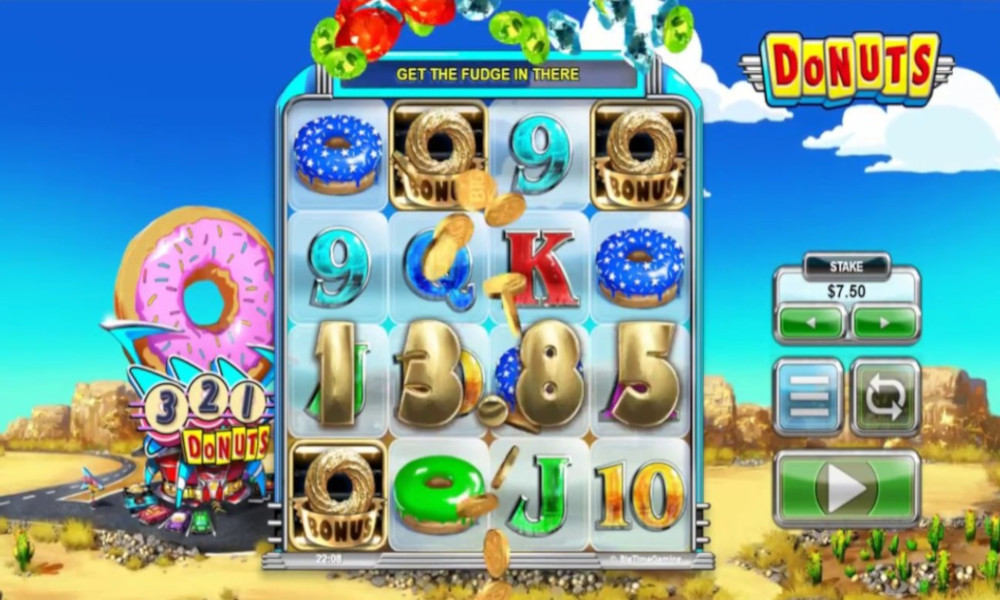 HOW TO PLAY Donuts?

A gigantic donut sign sitting on the roof of a road-to-nowhere sweet house is the first thing you’ll notice as you launch the game. It is the kind of donuts Homer Simpson would devour in the Simpsons and the overall feeling of the game is the closest it can get to this popular show. The reel grid sits neatly placed into a jukebox resembling frame with four reels and as many rows in it. The reel grid occupies the central position in the screen with game controls nicely placed on the right hand-side.

Donuts slot game is powered by 2,041 ways to win which gives the players more than enough opportunity to fill their stomachs. As one would expect from a game titles Donuts, these little delicacies are the main symbols in the game. There are four of them in total, whereas the full symbol offering is completed by a line of classic playing card symbols – from 9 to A. Donuts pays for combinations of at least four matching symbols when it comes to low-paying denominations, whereas you can also grab a payout for three donut symbols in a line.

Before you go on to actually hit the spin button, make sure to adjust the game controls and set the gameplay to your own liking with options that are available to you – stake, and autoplay selection.

Donuts is quite an exciting game and Big Time Gaming should be complimented for creating such an engaging gameplay which comes with a tasty selection of features to make your playing time full of flavor.

Wild & Scatter – the action starts with two special symbols you can encounter on the reels. First up is the Wild symbol which appears only on reels 2 to 4, replacing all others that the Scatter. As for this flavoursome bugger, it appears as a special, gold-laden Donut. Three (and four) of these will trigger the Bonus round and reward you with either 12 or 20 Free Spins, depending on the number of triggering Scatters.

Donut Boxes – before we delve into the bonus features, it’s worth noting that Donuts slot comes carrying a particularly sweet Donut Boxes feature with mystery prizes. The players are prompted to reveal up to 4 high-paying Donut symbols or a multiplying Wild – which can boost your wins from x2 to x4.

Bonus Feature – at the beginning of Free Spins, the players will go through a Bonus Countdown which is played on a new set of reels filled with nothing more than golden donuts. You get to start with that many scatters you had in your triggering combination and work your way up. The reels will go through three Bonus spins during which any donut that lands will be held in place with the re-spin countdown meter reset to three. That’s not all as any Golden Donut Scatters that land during the bonus will increase the Free Spins multiplier up to x50. When the Bonus countdown reaches zero then Free Spins will commence.

Free Spins – this universally loved special feature is even better in Donuts slot as it comes with a multiplier accrued in the previous Bonus round. As already said, this feature starts with either 12 or 20 free spins. There is a chance to increase the number during the actual feature and it is achieved by landing additional Scatters. 2, 3 or 4 Golden Donuts will bring extra 10, 20 or 30 free spins, respectively. Ultimately, you can enjoy unlimited retriggers to this feature which is quite something.

Jukebox-shaped playing set and a desert highway Donut Diner are not exactly makings of a promising scenario. Yet, this 2018 Big Time Gaming slot title called Donuts will exceed your expectations thanks to a highly engaging gameplay – filled with all sorts of goodies.

Donuts is a video slot available across all devices and platforms and we find it a highly affordable game as well. It will appeal to a wide range of players with different financial possibilities thanks to the fact wagers can go anywhere from €0.05 up to paltry €12.50.

As for the gameplay inside this tasty treat, the players will benefit from Donut Boxes carrying mystery prizes, a Bonus Feature with up to 50x multiplier and a Free Spins feature with an unlimited number of re-spins. This game also has a 100,000 coin jackpot which is quite a number for a game like this one.

WHERE TO PLAY DONUTS FOR REAL MONEY:

Players, we need your help with how we should to rank and rate these reviewed casino games. You can help us by rating this game, and if you really enjoyed playing Donuts. You can also share it with your friends on Facebook, Twitter and via email. For all freeplay games, if your free credits run out, simply just refresh the page and your balance will be restored.

Vegas Megaways
Big Time Gaming once again shows how to make a great megaways slot. Head out to your ...
Software:
Big Time Gaming
Reels:
6
Paylines:
up to 117,649
RTP:
96.27%
Volatility:
High
VIEW ALL GAMES