Secrets of ancient Egypt have fascinated the modern civilization beyond comprehension. In a desire to help unravel the divine mystery behind this ancient world Euro Games Technology (EGT) has done its fair share with impressive progressive slot title called Egypt Sky.

The insatiable desire for treasure will lead you through 5 reels and 40 adjustable paylines of this high-paced slot which offers up to 160,000 coins for the maximum jackpot you can hope to land in the base game.

A generally exciting gameplay of the Egypt Sky slot has been spiced up with a four-level progressive jackpot just for good measure which is another fascinating detail you can admire in this brilliant and fine looking EGT slot title. 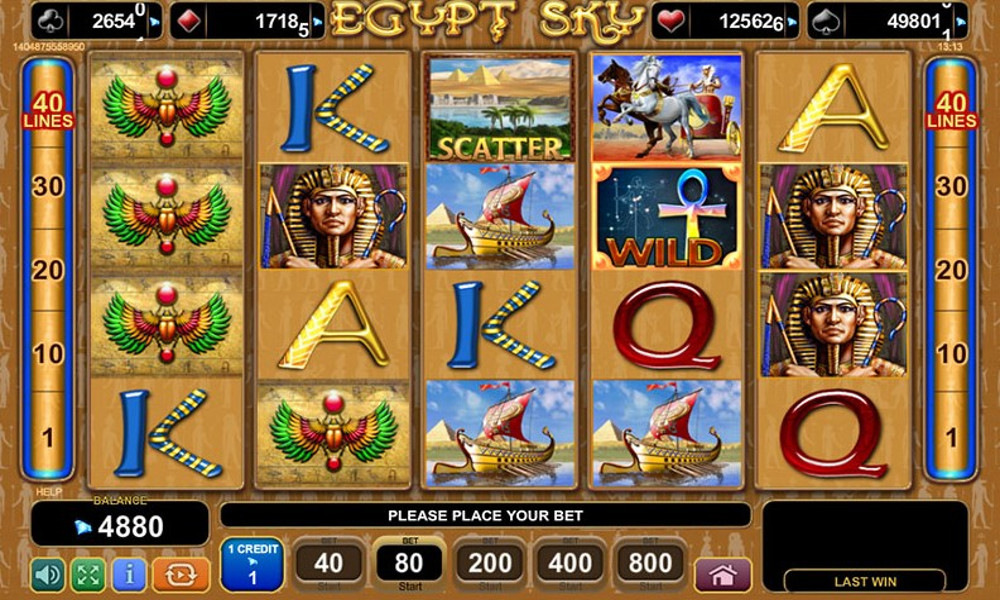 HOW TO PLAY Egypt Sky?

Sahara sand yellow dominating the background of the playing grid is an instant association to the sunbathed Egyptian planes whereas all recognisable symbols – scarabs and other ancient artefacts, horse chariot, Egyptian galley but pharaoh and queen as well – act as a perfect complement to the visual appeal.

Placed suitably below the playing grid are the game commands. Egypt Sky slot game does not feature a classic spin button, however. The reels are set in motion once you click on the desired bet value. There are five different amounts to choose from, all made for players of different wallet thickness. Starting from 40 coins, you can move up investing 80, 200, 400 or 800 which is the maximum bet.

EGT made sure to insert an Autoplay button as well which is a great option for all of you who like to sit back and watch the action unfolds.

In the end, the very aim of the game is to notch at least three matching symbols in an active payline. There are 40 paylines in total, with players available to choose whether they want to play with 1, 10, 20, 30 or the full range of 40 of them active at any spin.

Wild – Ankh symbol is the game’s Wild which can only appear on reels 2, 3 and 4. It will substitute for any other symbols except for the Scatter. Once a part of the winning combination, the Ankh Wild will expand to populate the entire reel it’s fallen into thus providing the players with an improved chace to land a further win.

Scatter – represented as the enchanting Egyptian landscape is the game’s Scatter, which is the single most rewarding symbol in the game – worth 160,000 coins if you manage to line five of them in an active payline. This particular symbol is also responsible for the single bonus feature this game brings with it.

Free Spins – three or more Scatter symbols will trigger the Free Spoins feature which comes with that fantastic expanding Wild option as well. The minimum number of three Scatters is enough for three complimentary spins. Four Scatters will give you 5 free spins, while five Scatters reward the maximum of 7 free spins. During these complimentary spins any Wild symbol tat appears will be fully expanded and stuck to the full reel for the remainder of the feature.

Gamble –  it’s that one feature everyone loves, the feature EGT likes putting inside their slots. It’s a simple game of chance during which you are given the chance to double your winning equal or less than 15,000 coins. You will be prompted to choose between the Red or Black button to guess the colour of a card facing down. Double your winnings on a right answer and see your potential payouts vanish on a wrong pick.

Progressive Jackpot – Titles Jackpot Cards, the Egypt Sky’s progressive jackpot is a mystery feature that can occur after any winning spin. Marked by four different card suits, these four jackpots are given to you once you find three matching cards out of the lot of 12. Mystery level corresponding your suit will be credited into your account immediately.

Egypt slot titles have forever been one of the most popular choice with all online casino software makers. It’s no wonder knowing the human fascination with pyramids, wealth of pharaohs and magical powers of their artefacts.

The players can choose from a range of Egypt slot games but are encouraged to go for EGT’s Egypt Sky as it’s a fresh rendition of this heavily exploited subject in a 5×4 frame with 40 adjustable paylines. This medium variance slot game comes with a 160,000 jackpot but has much more to offer than that.

Starting from the Gamble feature that allows you to double the win, to Free Spins with a sticky Wild that covers entire reel, all the way to the four-level progressive jackpot, we’re almost certain that Egypt Sky will gain your attention.

WHERE TO PLAY EGYPT SKY FOR REAL MONEY:

Players, we need your help with how we should to rank and rate these reviewed casino games. You can help us by rating this game, and if you really enjoyed playing Egypt Sky. You can also share it with your friends on Facebook, Twitter and via email. For all freeplay games, if your free credits run out, simply just refresh the page and your balance will be restored.

Dragon Hot
Dragon Hot is a thrilling new game that is being offered at online casinos that are ...
Software:
EGT
Reels:
5
Paylines:
20
RTP:
98.33%
Volatility:
Low