Red Tiger Epic Treasure slot is a 5×4 online slot with high volatility, 95.93% RTP, and 5,000x wins. The pirate-themed online slot hit the casinos in December 2021. So, all players looking to avoid snowy slots and exchange them for something a bit warmer – try Epic Treasure! The slot is made by Max Win Gaming and Red Tiger and appears in all Red Tiger online casinos worldwide. Epic Treasure brings players to a fun adventure with pirates looking to uncover epic riches and hidden treasures. Look for the treasure and you might win the 5,000x maximum payout as well.

The focus of the story is the pirate bay area that has been long forgotten by most. However, ancient legends speak of impressive riches hidden in the depths of the bay left after a massive shipwreck. Use the game’s main game features to discover the sunken riches. You have two main boosters to use – the chests collected in the special chest row above the grid full of prizes, as well as free spins. The Free Spins are the main feature, sure, but you can win big and enjoy the game with the special chests dropping during the base game as well.

The game is highly volatile, as you might have expected. Therefore, players are advised to start with smaller bets as the game has a nasty temper – it may pay big or not at all thanks to its extreme volatility and 95.93% RTP. The least you can wager in the game is €0.20, while the highest you can go is €20. Red Tiger Epic Treasure slot pays up to 5,000x the stake. You can find the slot in every Red Tiger online casino. Read more in our Epic Treasure slot review below. 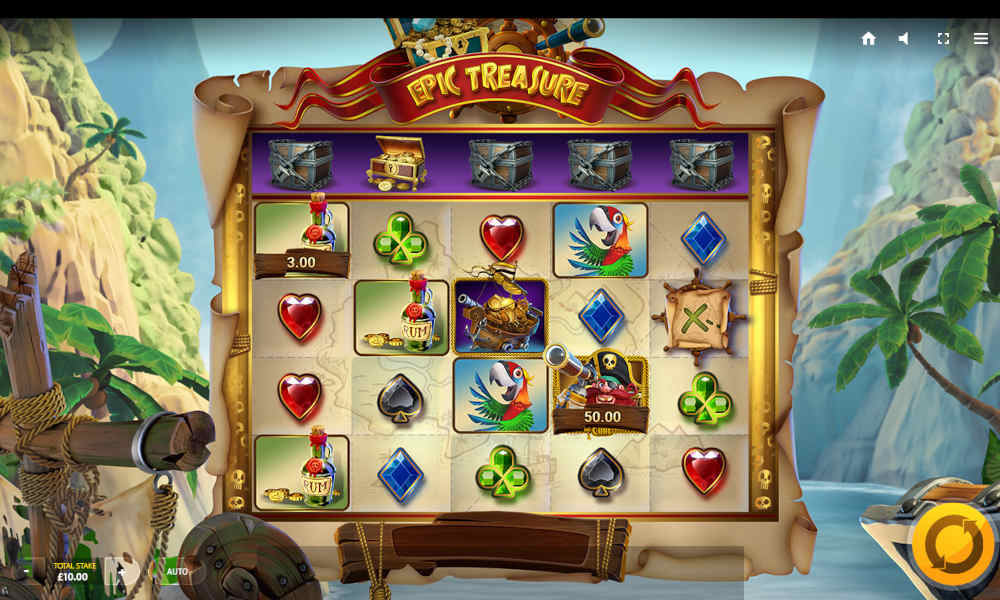 HOW TO PLAY Epic Treasure?

Epic Treasure slot is a pirate-themed online slot, which means it’s all about pirates, riches, and rum. The slot was made by Max Win Gaming exclusively for the Red Tiger platform, which means you can play it in any Red Tiger casino on the internet. The slot is a fun take on the whole pirate lifestyle, boasting cartoonish characters, a beautiful bay area, and a fun soundtrack. The backdrop behind the reels showcases the said pirate bay surrounded by cliffs, rocks, and palm trees. Chests presumably filled with riches are directly below the grid, so they act as decoration. What matters most here is not the treasure below the grid, but on the grid. The slot has 5 reels and 4 rows, but there’s also an additional row at the top. The row is filled with chests only – and they can be either closed, small, or epic. Closed chests do nothing, while small and epic produce big rewards during game features (but more on that later).

Besides the chests, the game also uses Scatters (Treasure Maps) and eight regular symbols. Four of those are low-pay tiles and you’ll recognize them as card suits shaped like gemstones of four colours. High-paying icons are typical pirate slot symbols: rum, a parrot, a ship and a one-armed pirate (probably the captain). When the game starts, you get to play with 40 paylines, but the number can quickly escalate to include 3,125 ways to win.

To play Epic Treasure online slot, you only need to rely on the game’s main buttons: bets, Autoplay, Turbo play, and Spin. Before you start playing the game, you should figure out how much you are willing to wager on a round. The lowest you can go is €0.20, while the highest bet possible is €20. The game pays up to 5,000x the stake, but you will have to be very patient and lucky to get to that maximum payout.

Do you want to know how to play the Epic Treasure slot without paying a single cent? Play it for free? Epic Treasure is, like many other online slots, available for free play as other free casino slots. Just find a reliable online casino that accepts free slot games and that’s it! You can also look for the game in our free slot games registry right here at Best Casinos. If you want to play the game at the best Red Tiger casinos, we recommend finding a freeplay casino and then switching to real-money play.

Red Tiger Epic Treasure slot is a wonderful online slot supported on every device in the house. In fact, we might even recommend trying out different platforms to truly experience the splendour found in the Epic Treasure online slot, especially if you are into special features such as:

Are you, like us, a fan of pirates and dangerous adventures? Look no further than the Red Tiger Epic Treasure online slot! The game was made by Max Win Gaming, a small company creating exciting online slots. Epic Treasure is available only at Red Tiger casinos, so don’t waste time looking for the game at gambling venues. We have a list of top recommended Red Tiger casinos where you can play the game for real money and for free.

The game uses two main features, and even though there are no Wilds, you still get a way to boost prizes. You can win up to 1,000x the stake from Free Spins only, but the game’s main prize is the 5,000x jackpot.

WHERE TO PLAY EPIC TREASURE FOR REAL MONEY:

Players, we need your help with how we should to rank and rate these reviewed casino games. You can help us by rating this game, and if you really enjoyed playing Epic Treasure. You can also share it with your friends on Facebook, Twitter and via email. For all freeplay games, if your free credits run out, simply just refresh the page and your balance will be restored.

Bass Boss
Another fishing-themed slot is here! Red Tiger is confident that you are the next ...
Software:
Red Tiger
Reels:
5
Paylines:
10
RTP:
95.07%
Volatility:
High